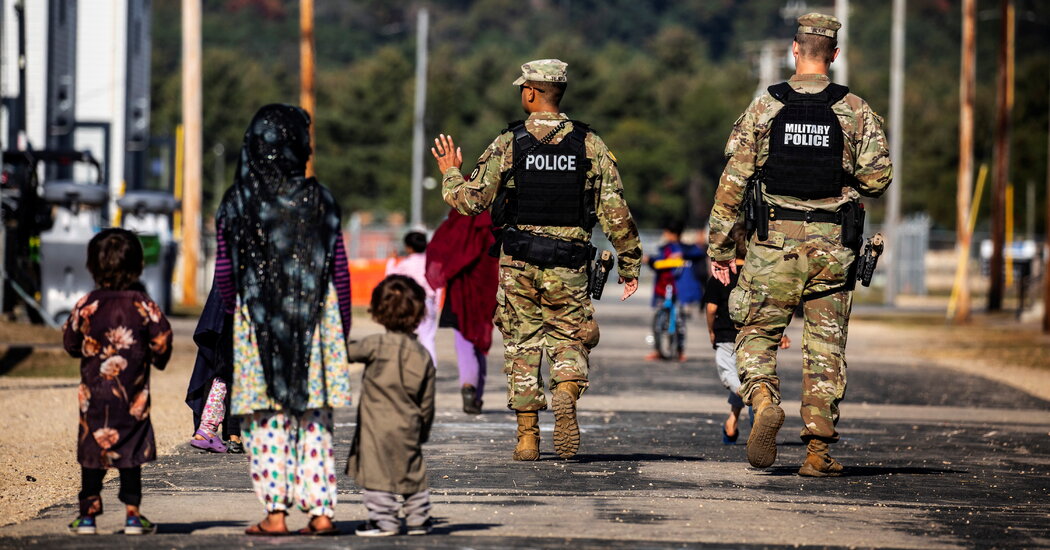 FORT MCCOY, Wisconsin – In late August, evacuees from Afghanistan began arriving by full buses at the Fort McCoy military base in the Midwest, carrying little more than cellphones and poignant tales of their narrow escapes from a country they may never see again. They were greeted by soldiers, assigned to rooms in white barracks and advised not to stray into the surrounding forest, lest they get lost.

More than a month later, the remote base some 170 miles from Milwaukee is home to 12,600 evacuees, nearly half of whom are children, now larger than any town in West Monroe County. of Wisconsin.

The story is much the same at seven other military installations from Texas to New Jersey. A total of around 53,000 Afghans have lived in these bases since the chaotic evacuation of Kabul this summer, which marked the end of 20 years of war. While many Americans have turned their attention away from the largest evacuation of war refugees from Vietnam, the operation is largely a work in progress here, overseen by a multitude of federal agencies and thousands of American troops.

While an initial group of around 2,600 people – many of them former military translators and others who assisted Allied forces during the war – quickly settled in American communities, a large majority remain stranded on those sprawling military crossing stations, not knowing when they can begin the new American life they were waiting for. An additional 14,000 people are still on bases overseas, awaiting transfer to the United States.

“We have built a city to accommodate almost 13,000 guests,” said Col. Jen McDonough, deputy commander of sustainment at Fort McCoy, where approximately 1,600 troops are responsible for making sure the massive operation goes smoothly.

On a warm autumn day here, refugees played football with soldiers, young children did crafts with volunteers while their mothers studied English in an adjacent classroom, and families in a warehouse rummaged through boxes of underwear, shirts and jackets.

Afghan evacuees said they were grateful for the warm welcome they received at the fort, but for many the long wait was grueling. None have left the base since arriving, unless they were green card holders or US citizens.

“I have repeatedly asked for the date of departure,” said Farwardin Khorasani, 36, who was an interpreter at the US embassy in Kabul. He fled Afghanistan with his wife and two young daughters and hopes to settle in Sacramento. “We are unemployed here and have nothing to do.”

U.S. officials say the delays are due to a measles outbreak, medical checks and a vaccination campaign, as well as the need to complete immigration processing, which involves interviews, biometric exams and work permit applications. Most bases in the United States are at or near full capacity, and Afghan evacuees waiting at bases in the Middle East, Spain and Germany can only be airlifted once space has opened.

The housing shortage is also creating delays. Many families wish to settle where they already have friends or relatives, in places with existing Afghan communities such as California and the Washington, DC area. But officials said a shortage of affordable apartments could delay their relocation. On Thursday, Congress passed a short-term spending bill that included $ 6.3 billion to resettle and settle Afghan refugees.

Gen. Glen D. VanHerck, commander of the U.S. Northern Command, which is overseeing the operation at Fort McCoy, said the military was ready to welcome base arrivals until the spring, giving authorities the time to overcome the housing shortage.

“We have built housing capacity and we are providing our Afghan hosts with the environment they need,” he said.

One of the first priorities was to vaccinate evacuees against various diseases.

There have been 24 cases of measles, which has sparked a vaccination campaign against the disease, as well as against mumps, rubella and polio, an effort that has just run out of steam. People must wait at least 21 days after these vaccinations before receiving medical clearance to leave the bases.

Almost 85% of all base evacuees have received the single-dose Johnson & Johnson coronavirus vaccine, and the infection rate among the population is less than 1%, General VanHerck said.

The bases also saw the crime, much like densely populated cities.

Two evacuated Afghans are in federal detention; one was accused of committing a sexual act with a minor and another of assaulting his wife, both in Fort McCoy.

The FBI is investigating an assault on a female serviceman by Afghan men at Fort Bliss in El Paso. And in Quantico, Va., A military police officer on duty reported watching a 24-year-old Afghan sexually assault a 3-year-old Afghan girl, according to a criminal complaint.

General VanHerck said the army “will continue to take all necessary measures to ensure the safety” of those working on the base and of the Afghan evacuees. He said many reports to law enforcement were made by Afghans.

The residents seen on a tightly controlled media tour of the base represented a cross section of Afghan society.

Among them was a group of 148 young women who hoped to complete their university studies in the United States and the principal of an international school. There was an Afghan Air Force pilot who had learned to fly UH-60 Black Hawk helicopters in Alabama and Texas.

There were men and women from remote provinces, including a cook who had prepared food for the soldiers in a remote outpost. Some people wore traditional Afghan clothing. Others put on jeans and T-shirts. About half knew some English, but others are expected to start learning to read and write once relocated to the United States, officials said.

Farzana Mohammadi, a member of the Afghan women’s paralympic basketball team who has been unable to walk since having polio as a child, said she hopes to continue playing sports and studying psychology in Seattle.

Although optimistic about her own future, “I think only of my parents and my younger sister all the time,” said Mohammadi, 24, whose family was still in Kabul.

About 50 to 60 people live in each two-story barracks, where single beds are placed side by side. For more privacy, families have improvised partitions using sheets.

Understanding the Taliban takeover in Afghanistan

Who are the Taliban? The Taliban emerged in 1994 amid the unrest following the withdrawal of Soviet forces from Afghanistan in 1989. They used brutal public punishments, including flogging, amputations and mass executions, to enforce their rules. Here’s more on their origin story and their record as leaders.

Who are the Taliban leaders? They are the main leaders of the Taliban, men who have spent years fleeing, in hiding, in jail and dodging American drones. Little is known about them or how they plan to rule, including whether they will be as tolerant as they claim. A spokesperson told The Times the group wanted to put their past behind them, but there would be restrictions.

There are strong security details outside the living quarters, which are grouped into ‘communities’ each with a center where evacuees can obtain personal hygiene items or learn about activities, such as town halls with military leaders.

Take-out cafes offering tea, coffee and light snacks are lively. But the eight self-service laundromats were underutilized: most Afghans preferred to wash their clothes by hand and hang them to dry on ropes that the military quickly erected.

An imam certifies that the meals served in four cafeterias are halal, but the queues to buy pizza at the exchange base often extend outside.

After weeks of traffic jams with no departure schedule, there have been tensions among residents. Brawls often break out in the queue to enter the cafeteria, and there are sometimes arguments between people from different tribes.

Several young single women said they were verbally harassed by Afghan men for being alone at the base.

“We were told, ‘How are you here without a male member of your family? We will not tolerate this, ”recalled Nilab Ibrahimy, 23, who traveled to Kabul airport in a convoy of seven buses carrying the 148 students of the Asian University for Women, based in Bangladesh, where they were all studying before. the coronavirus epidemic has stranded them in Kabul.

Ms. Ibrahimy brought the issue to the US military leadership, and the entire group of students was transferred to another barracks housing mostly single women. There have been no problems since, she and others said.

Passing the time was another challenge. “When we got here we were sitting in our rooms doing nothing,” said Sepehra Azami, 25, who was studying economics before fleeing.

Ms Azami, Ms Ibrahimy and another friend Batool Bahnam asked some mothers if they were interested in their children learning basic conversational English: What’s your name? How are you? Thank you.

They were. Soon, adults also started approaching young women for lessons, and classes were added for women and men. “The demand is really high,” Ms. Azami said. “Families are grappling with language barriers.

Mounds of clothing were given to refugees, but it wasn’t until last week that every evacuee received items.

Thursday was finally the turn of a 12-year-old boy named Nayatola. Dressed in brown kurta pajamas, he was looking for clothes that fit him. He ended up with an oversized white sweater. At her feet were the adult-size plastic slippers her father had brought from Afghanistan – Nayatola had no other shoes.

As the day wore on, children could be seen outside scribbling with chalk. When visitors passed, they shouted. “Hello how are you?” a few of them shouted, trying out their new English phrases.

Former Afghan Air Force pilot Abdulhadi Pageman turned to the warehouse where families bought clothes. “These kids are the future of America,” he said of the grassroots kids. “They will be scientists, engineers. You just have to be patient. “