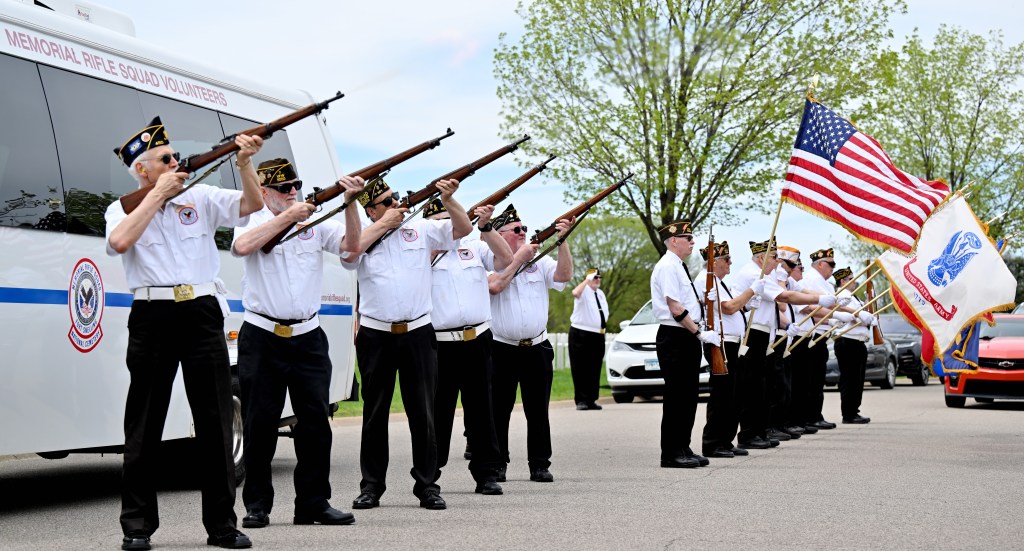 At 7:30 a.m. one recent morning outside a maintenance building in a hidden corner of Fort Snelling National Cemetery, the mournful melody of taps mingles with the roar of planes taking off and landing near Minneapolis-St. Paul International Airport.

Joseph Collova, a Navy veteran, tunes his trumpet before a day of honoring veterans.

Collova is part of the Fort Snelling Memorial Rifle Squad, the oldest volunteer group for national cemeteries in the United States. They meet Monday through Friday – 125 veterans, 25 per team. They perform official military honors for veterans buried at Fort Snelling. which opened in 1936 and has around 248,000 people buried on its 436 acres.

For most elderly men, they gather in a small room in the cemetery with packed lunches and snacks. In the back of the room, John Barnes, a former Navy submarine mechanic, polishes and cleans an antique 1903 Springfield rifle.

At 8 a.m., the room is noisy with discussions, questions, and the good-natured banter that accompanies any group of military veterans.

Mike Pluta, former Navy flight deck manager aboard the USS Ranger, uses his loud voice to get men focused and organized. Pluta has the distinction of being, to date, the only member of the Second Generation Rifle Squad. His father, Lawrence Pluta, was one of six veterans who, in 1979, founded the team in response to active-duty service members slashing their performance from the traditional ceremonial gun volley, tap dancing and presentation of the folded flag.

Seated next to Pluta is squad commander Robert Selden, a 20-year Air Force veteran, looking at a copy of the day’s burials. It highlights veteran entries and notes the service in which the individual served. It also notes in which of the six incarceration shelters each ceremony is to take place.

At around 8:30 a.m., the team stands as Alan Krueger, former assistant to the army chaplain, leads the group in prayer. At the end of the prayer, the team recites the Pledge of Allegiance.

Last minute details should also be considered. Tom Mullon, a former army medic, stands in front of a mirror. Robert Poppoff, who served as a machinist’s mate aboard the USS Coral Sea, polishes his brass buckles. A bus driver is assigned, the flags are removed from their mounts, the guns are slung, and towards the bus the squad heads.

FIRST FUNERAL OF THE DAY

The first funeral of the day is for Howard A. Payne, an Army veteran. A quick turn to the internment shelter and the team exits the van. They try to arrive before the funeral procession, one of the squad members is in radio contact with Fort Snelling National Cemetery personnel who inform them that the family is approaching.

The color guard, with five flags – the United States as well as the colors of four branches of the military service – lines up outside the shelter. Ceremonial guards are posted on either side of the colors.

On this day, a five-man rifle squad stands at parade rest. Several members of the rifle squad help direct traffic.

Stephan Landgraf, a former Marine, and Squad Commander Selden come forward to accept the cremated remains of Howard Payne and a folded American flag and place them solemnly before the now reunited family. Selden explains aspects of the ceremony to family members and warns them of the loud noise that accompanies the three-gun volley.

Standing among the rows of tombstones, Collova and Mullon perform echo taps – two buglers stand at a distance and achieve a haunting echo effect while playing taps. Every flag except that of the United States is lowered and guns are presented. Members of the rifle squad who are not wearing colors or rifles return a salute.

After some patting, Landgraf steps forward, slowly and ceremoniously picks up the folded American flag and, with a deliberate step, presents it to the designated next of kin.

As they reach for the flag, he gently cradles their hands in his, a heartwarming gesture learned from his mentor and legendary team member Charlie Korlath, who passed away earlier this year.

Landgraf then repeats the words he has spoken hundreds of times:

Sometimes Landraf and Selden perform a flag-folding ceremony prior to the presentation, where they unfold a folded flag and refold it or, in the case of a flag-draped casket, fold that flag.

With the presentation, the MRS ceremony is over. First the color guard withdraws, then the rifle platoon. Then, several MRS members pick up the shell casings, take three and place them in a small purple bag, and hand it to a family member. The team will collect approximately 8,000 used cases in one year.

UP TO 15 CEREMONIES PER DAY

Then it’s on to the next ceremony, 11 more today.

The Fort Snelling Memorial Rifle Squad can host up to 15 ceremonies a day, running from one to the next, but volunteers don’t mind busy schedules because there’s nowhere they’d rather be .

“I can’t wait to be there every Friday,” Plunta said. “The camaraderie between the guys, rubbing shoulders with veterans, doing our duty here.”

Poppoff says, “These guys are amazing. It’s just great to be here and be a part of it.

The community keeps this group of veterans together, but their paths to the team are as diverse as its members.

Or sometimes it’s personal, as John Lacina, who served in the Air Force, explains.

A former Marine has literally found his way to the team.

“I came here on Memorial Day and got lost,” said Steven Rada. “I ended up here (in the MSR building). Mike (Plunta) was on the sidewalk, only 12 people showed up that day, Mike asked if I was a Marine, something about how I behaved, I said yes, then he told me asked if I had ever thought of joining a rifle team… And the rest is history. It’s been four and a half years. »

For one person, his mission, his reason for being a member of the Memorial Rifle Squad is to honor veterans.

Selden, the squad commander, summarizes: “It is our honor to honor.