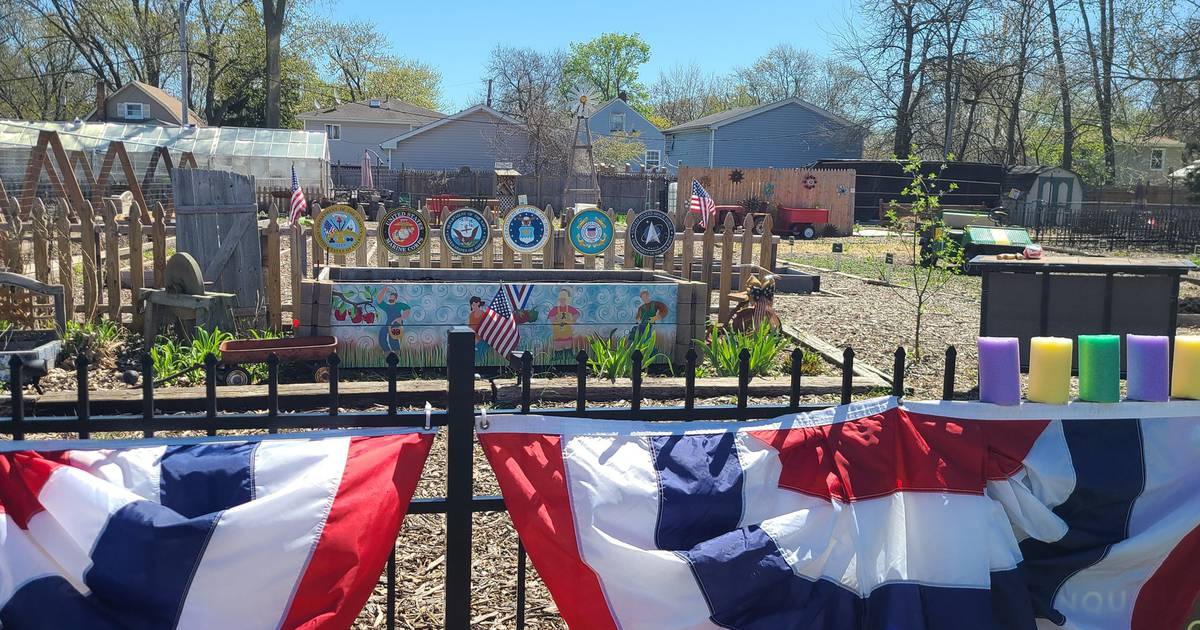 The Marie Wilkinson Pantry in Aurora Saturday morning dedicated a special area in its garden to honor those who served in the military, in hopes that more veterans will come to plant and grow at the site.

Starting at 11 a.m., staff and visitors to the pantry at 835 Highland Ave. gathered to celebrate the recent passage of Illinois House Bill 2894, which designates the first Saturday in May as Veterans Garden Day.

Pantry manager Diane Renner said the genesis for Saturday’s event came during a meeting weeks ago, when one of the gardening staff mentioned reading the news legislation.

“We had a meeting of gardeners and one of them mentioned that he was reading all the new bills from the Illinois House for some reason and found out that they passed a new bill this year for the first Saturday in May, called Veterans Gardening. Day,” Renner said. “We thought we should do something about it. We have a place in our garden that we dedicate to veterans. They can come and garden it – garden the whole garden if they want. We just want to promote that we support our local veterans.

Illinois Department of Veterans Affairs Director Terry Prince attended the event in Aurora and said the new legislation “is another great opportunity to celebrate veterans.”

Along with the grand opening of the Veterans Victory Garden, the seals of the U.S. military branches will also be displayed on the grounds of the garden at the Pantry.

Virtually everyone who was interviewed about the initiative spoke of the therapeutic benefits of gardening, especially for veterans who might be suffering from some sort of trauma.

Aurora’s Lisa Garcia, who works as a veterans advocate, wore a shirt with the new Illinois House Bill number 2894 printed directly on the sleeve.

“I heard about this House bill, and then we developed this event,” Garcia said just before the ceremony on Saturday.

“I think it’s great that we have this for veterans,” she said. “Gardening brings peace, it brings comfort and I think a lot of veterans who have PTSD or mental issues will find it good. Planting something helps somehow. You are one with the Earth.

Aurora’s Neil Potter, who is a veteran himself, said he started gardening at the pantry site three years ago “since my family became interested in gardening and we land here”.

“I got involved in the activity in the garden and I think it’s great to have this day aside. I wasn’t aware of it before, but I think it’s a good thing,” he said. “I hope it inspires more veterans to do it. I think it’s very therapeutic. It’s a very calming and relaxing thing to do and to see things actually happen through your efforts. is very rewarding.

In addition to honoring veterans, Saturday’s event also celebrated Aurora’s late food pantry founder and civil rights activist, Marie Wilkinson, on what would have been her 113th birthday.

David Sharos is a freelance journalist for The Beacon-News.