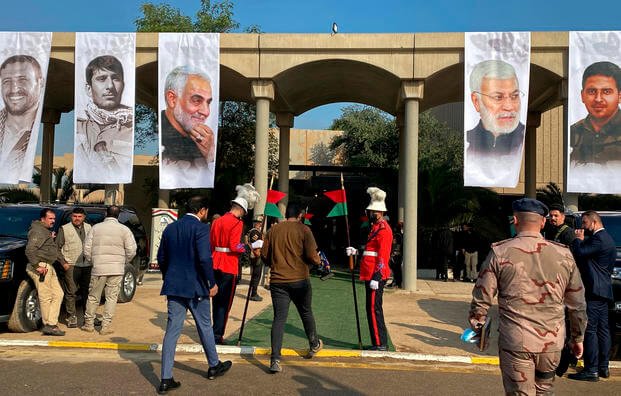 BAGHDAD – Katyusha rocket struck an Iraqi military base housing US troops at Baghdad International Airport on Wednesday while in Syria eight rounds of indirect fire hit a base with members of the US-led coalition , announced the Iraqi and American soldiers.

No damage or casualties were reported in the attack in Iraq, the third in as many days. The attacks began on Monday, the anniversary of a US airstrike that killed Iranian General Qassim Soleimani in Baghdad two years ago.

The attack in eastern Syria hit a US-backed Syrian Democratic Forces-led base with a small advisory coalition presence. It also claimed no casualties but several shells landed inside the base, causing minor damage, the coalition said in a statement.

Coalition forces, acting on the intelligence base, responded quickly and fired six artillery shells at the point of origin of the attack just outside the eastern town of Mayadeen, a stronghold of fighters supported by Iran, the statement said.

The statement said that “malicious actors backed by Iran fired (…) from inside civilian infrastructure without any regard for civil security.”

â€œThe Coalition reserves the right to defend itself and to join forces against any threat, and will continue to do everything in its power to protect these forces,â€ said Brennan.

Earlier on Wednesday, the Iraqi military said a rocket launcher with a rocket was located in a residential area in western Baghdad, an area used in the past by Iran-backed militias to fire rockets. on the airport.

On Monday, two armed drones were shot down on their way to a facility housing US advisers at Baghdad airport. Two drones loaded with explosives targeting an Iraqi military base housing US troops in western Anbar province were destroyed on Tuesday.

The 2020 US drone strike at Baghdad airport killed Soleimani, who was the leader of Iran’s elite Quds force, and Abu Mahdi al-Muhandis, deputy commander of Iranian-backed militias in Iraq, known under the name of Popular Mobilization Forces.

Pro-Iranian Shiite factions in Iraq have vowed revenge for the murder and conditioned an end to the attacks on the US presence in Iraq on the complete exit of US troops from the country.

Senior US Navy Commander General Frank McKenzie warned in an interview with The Associated Press last month that he expects attacks on US and Iraqi personnel by militias to increase. supported by Iran and determined to bring out the American forces.

Â© Copyright 2022 Associated Press. All rights reserved. This material may not be published, broadcast, rewritten or redistributed.