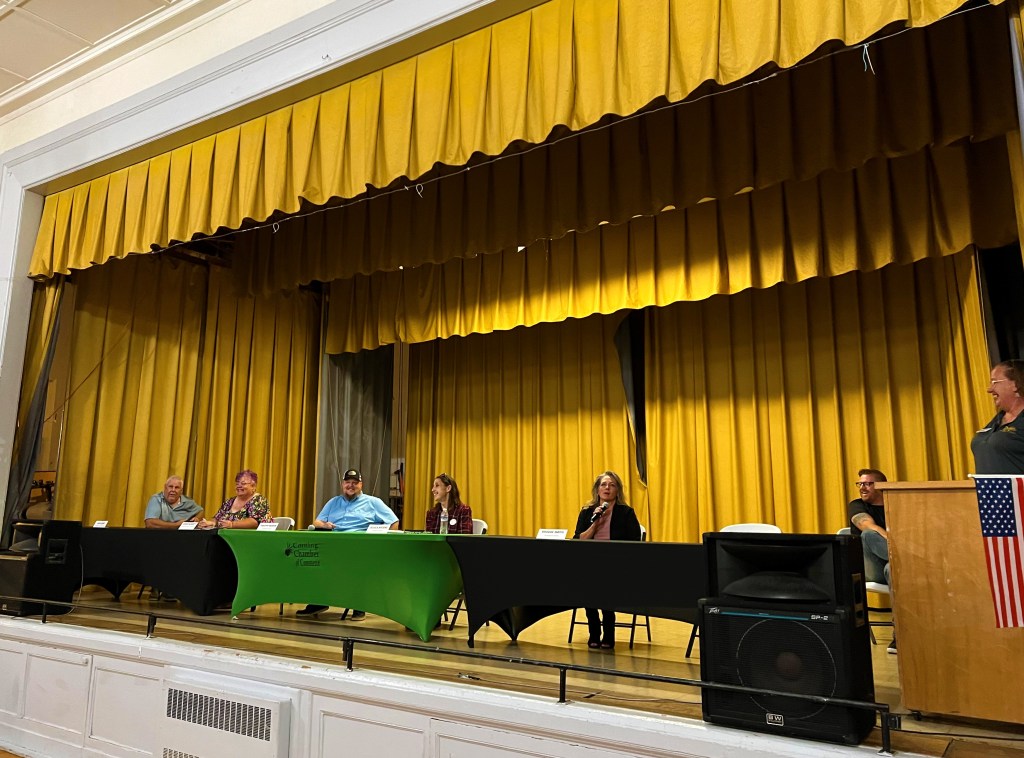 CORNING — Candidates for City Council headed to Veterans Memorial Hall on Tuesday for a Candidates Night hosted by the Corning Chamber of Commerce.

The two seats up for grabs are Jessica Brooke, Lisa “Chata” Lomeli, Timothy Morgan, Brooke Smith, and incumbents Dave Demo and Karen Burnett. All candidates except Lomeli were present for the event.

The first question of the night was why the candidates live in Corning and why they are running for city council. Most applicants answered the first part of the question by saying they are native or have lived in the city for many years.

Smith said she decided to run because she cares deeply about Corning, is passionate about business, and wants the city to continue to have strong economic development.

Brooke said she wanted to help solve the problems and help the town grow.

Morgan said he was running because the city needs someone who is passionate about Corning like him and about making the community safer.

Burnett said she wants to continue serving on the board because she thinks the city is moving in the right direction.

“We’re cleaning up downtown,” Burnett said. “We’re moving forward with a bunch of ideas that we’ve had for a long time.”

Downtown is one of the reasons Demo said he wants to run for council again. He said he wanted to help bring business back to town and see through the good the council has done for the town.

When asked what committees, boards or councils the nominees previously sat on, some spoke of their lack of experience. At the same time, Demo and Burnett have gone through their long history of serving local government.

Another question of the night concerned the implementation of Measure A, the sales tax measure approved by voters in 2016.

Smith said the measure, for the most part, has been positive, but expressed frustration about where the funds are being distributed, such as more going to law enforcement. Brooke and Morgan had similar feelings to Smith about funds for law enforcement and first responders.

With the onset of electric cars, Burnett said Corning could lose some of those funds, so it might become necessary for the city to look for other ways to recoup those losses. The demo kinda echoes everything everyone has been saying about the positive benefits of the measure and finding other sources of revenue for the city in the future.

A final question of the evening was about one thing changing at Corning.

It would be Smith’s lack of business and out-of-town notoriety. Brooke would like to see more ways for people to be brought to town like they do for things like the Corning Olive Festival. Morgan said he wanted to see something that shows Corning is the olive capital of the world and is an attraction for the city.

Burnett said the city is already putting programs and projects in place to keep moving forward. She added that families are coming back to Corning and settling down.

Mayor Robert Snow is running unopposed this election cycle. He had a brief opening remark before spending the night in Hale.

Here’s what you need to know