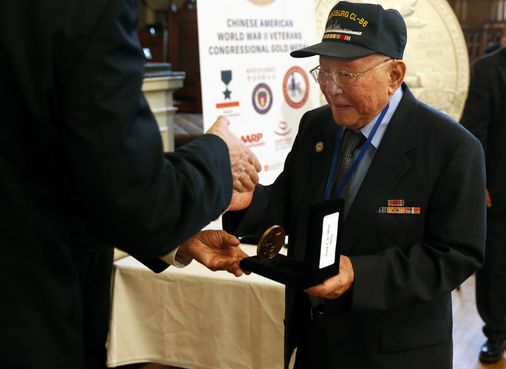 â€œI think it’s a great honor to receive the medal,â€ said Lum, 94, a former Marine. When it was her turn to accept the award, a member of the audience shouted “Semper Fi,” the motto of the United States Marine Corps.

Lum, Gee, and Moy were the only living former soldiers to receive the honor at the ceremony, during which officials presented 115 more medals to survivors of Chinese-American veterans who served in World War II. Bronze Star Medals were also awarded posthumously to the children of Thomas Shee Fun Chin, who helped liberate Dachau Concentration Camp, and Way Horn Jee, who fought with the 24th Division of army infantry in the Philippines.

The Congressional Gold Medals were awarded under a 2018 law that established the Recognition Program to honor Chinese-American veterans, or their survivors, for serving in World War II. By law, about a quarter of the country’s 78,000 Chinese Americans served in the armed forces during the conflict.

Of those soldiers, about 40 percent were not U.S. citizens due to laws that denied citizenship to people of Chinese descent, U.S. Representative Stephen Lynchof South Boston said.

“They put on the uniform of the United States, went into battle to defend the ideals of this country at a time when this country and our government were not living up to those same ideals,” he said. declared. “It is a profound gift that the Chinese Americans have given to this country.”

Moy, 97, a Navy veteran, was born in Fall River, said his son, Marty, then returned to China with his mother when he was 4. Moy’s mother died of tuberculosis and he stayed in her village for a decade until the Japanese invaded China, then he returned to the United States.

â€œHe returned to Fall River, not knowing English at all and had to assimilate,â€ said Marty Moy, who lives in Manchester, NH.

Moy tried to enlist in the military, his son said, but was rejected.

â€œThey looked at him and they said his equipment weighed more than him,â€ said Marty Moy. “So he went right over to the Navy and joined the Navy.”

Moy attended the ceremony wearing a baseball cap in honor of the USS Vicksburg (CL-86), his former ship.

The ship visited Iwo Jima and Okinawa, and Moy was in Tokyo Bay when the Japanese government surrendered to Allied forces in 1945, his son said.

Moy remembers scenes from his service vividly, including the Higgins ships that carried the Marines ashore.

â€œHe remembers all those details, every detail of all the battles he fought in,â€ his son said.

Gee was born in China and moved to the United States when he was 10, said his son, Marvin Gee, who lives in Westwood.

He joined the U.S. Army, was certified as a High Speed â€‹â€‹Radio Operator, and was deployed to Yokohama, Japan, according to a biography.

â€œEven in the face of discrimination, they raised their hands and volunteered to serve their country,â€ he said.

Retired Army General William S. Chen helped present the Bronze Star medals to Chin’s daughter and Jee’s son. Chen, the first Chinese-American to become a two-star general, said that while the military determines eligibility for Congressional gold medals, it is re-examining the combat records of Chinese-American soldiers in an effort to recognize the heroism that had not been announced.

Chin was born in China and moved to Brookline when he was around 13, said his daughter, Betty Chin, a Wakefield resident.

He joined the military and served as a sniper in the 42nd Infantry Division in Europe, where he looked small compared to some of his fellow soldiers, she said.

â€œHe was a little guy who carried all kinds of artillery and military machine guns,â€ Betty Chin said. “You look at the rest of the guys, and they were big, big guys.”

Chin’s division entered Dachau in April 1945. He never spoke of what he saw, his daughter said.

After the war, Chin worked in laundry and catering businesses and eventually opened his own restaurant in Wellesley. He died in 1992 at the age of 72.

â€œHe truly operated with honor and wanted to support his family and be a part of American society,â€ said Betty Chin.

Jee left China at the age of 20 to join his father, who ran a grocery store in Ruleville, Mississippi, said son Melvin Jee.

He was drafted into the military, his son said, and deployed to the Philippines.

The experience “made him want to be at peace with people,” said Melvin Jee, who lives in Whitinsville.

â€œAlways be nice to people. Always be respectful. Always be at peace with them, â€said his father.

â€œIt was he who saw the horrors of war. He was the one who sacrificed himself for this country, â€he declared. â€œI am just his son. I am the beneficiary of his survival in the war.