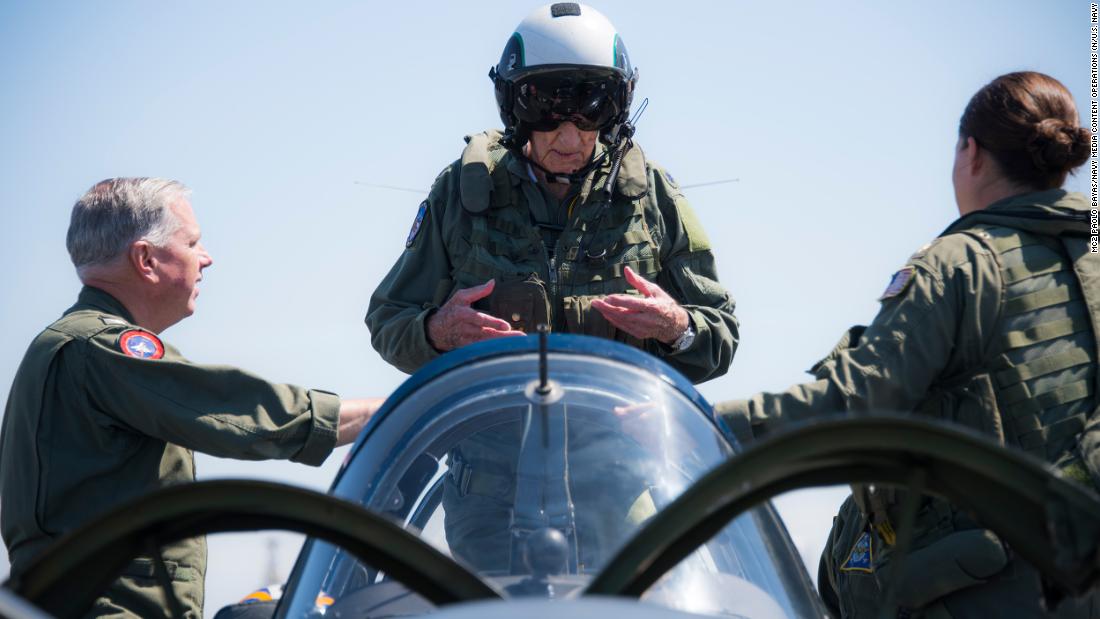 Andrea Laird said her father died alongside her in Walnut Creek, California on August 10.

In June, according to his daughter, Laird made his last flight with the help of Dream Flights, a Nevada company that “is dedicated to honoring military veterans and seniors with the adventure of a lifetime,” according to the company website.

He was joined by fellow fighter pilot Clarence “Bud” Anderson, who is expected to turn 101 in January.

“He and Bud got together, and we also had a bottle of champagne for them. For them to each toast after their flights,” Andrea Laird told CNN.

On his 90th birthday, Laird parachuted out of a plane, according to the San Diego Air and Space Museum, which described him as the “quintessential fighter pilot”.

“I think he had a love of flying and already had a pilot’s license,” she said.

“He remembered seeing film footage of biplanes landing on decks of boats that had been converted into aircraft carriers. […] and he thought that sounded like a lot of fun. I would like to do that.”

His career began in the European theater, according to a biography on the USS Hornet Sea, Air and Space Museum. Flying a Grumman Wildcat, he shot down two German planes – a bomber and a seaplane – during an operation off Norway in 1943. He went to the Pacific in 1944 and shot down several Japanese planes, according to the museum.

In total, Laird shot down six or seven planes, according to the museum, although his official total is 5.75 planes, due to the way shots are shared among members of a squadron. The title of “ace” is given to fighter pilots credited with shooting down five or more enemy aircraft.

After World War II, Laird flew in the Korean War and the Vietnam War, during which he made a total of 32 transpacific flights, his daughter said.

In 2013, Laird was inducted into the International Air and Space Hall of Fame and is considered the only United States Navy ace to achieve combat victories in the Pacific and European theaters. of World War II, according to the San Diego Air and Space Museum.

“He truly embodied the spirit of aviation and space exploration, earning him a place of honor in the prestigious International Air & Space Hall of Fame,” said Jim Kidrick, President and CEO. management of the museum.

Laird has also received several accolades, including the Distinguished Flying Cross and the Congressional Gold Medal.

When asked how she would remember her father, Andrea Laird replied: “He had an extremely dry and funny sense of humor.”

“And he was a really generous guy,” she said, adding that he tried to help people when he could.