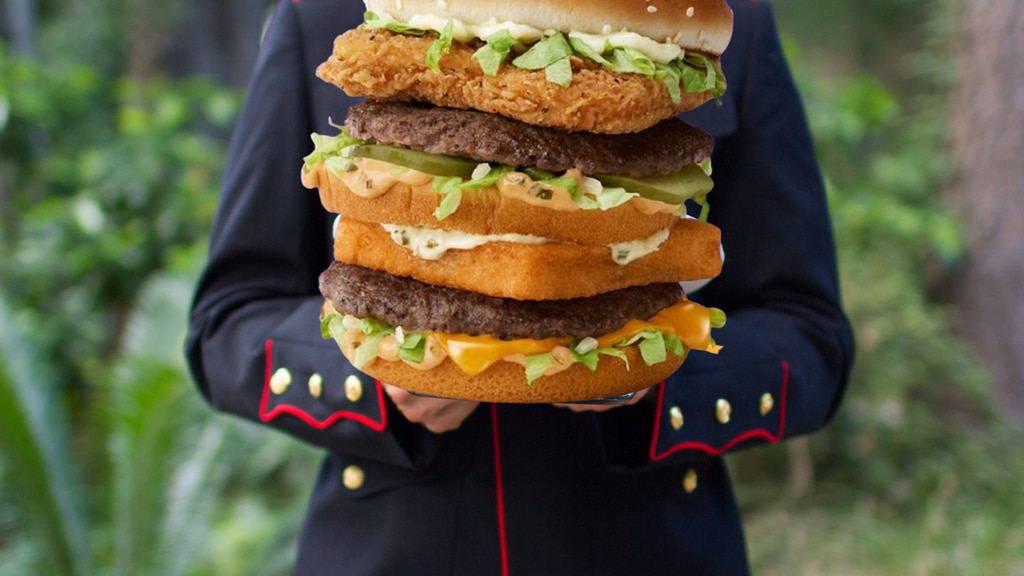 From free meals on Veterans Day to military discounts and luxurious front-row parking, businesses that clamor for the patriotic appearance have long used special offers to show how much they appreciate veterans.

McDonalds, the mother of all fast food, has, albeit unwittingly, finally found a way to honor America’s most neglected branch of service in a way that will leave you wondering if its marketing team was too preoccupied. by whether she could or not, that they didn’t stop to think whether they should.

On January 31st, the “Land, Air and Sea” will take over the beaches of McDonald’s… and will probably clog our veins, for a limited time only.

This 1,330-calorie monstrosity combines a Big Mac with a McChicken and Filet-o-Fish to create a delicious combination taste that’s just what drunken Marines need to recover from a night of revelry in time for that test of hangover physical condition.

“From hip-hop icons to Christmas queens, everyone has a unique McDonald’s order, including our everyday customers,” said Jennifer Healan, McDonald’s vice president of US marketing, content. brand and engagement, in a statement about the new menu item. . “This campaign shows it was never ‘our menu’ – the menu belongs to our fans.”

Before the Marines get too excited and run to the nearest McDonalds, there’s a little challenge with the new Land, Air, and Sea sandwich. McDonald’s plans to supply all the materials, but assembly isn’t. included.

Obviously, the components will be sold separately, and those brave enough to order this diabetic delicacy will have to unbox and build them themselves – which overall is not unlike the Corps with all its gear from bad quality.

So, evil dogs, don’t forget to invite a logistics officer and a combat engineer with you as you embark on this culinary journey that’s sure to be as big as raising the flag on Iwo Jima.

Observation Post is the Military Times‘ one-stop-shop for everything off-duty. Stories may reflect the author’s observations.

Sarah Sicard is an editor at the Military Times. Previously, she served as digital editor of the Military Times and editor-in-chief of the Army Times. Other work can be found in National Defense Magazine, Task & Purpose and Defense News.