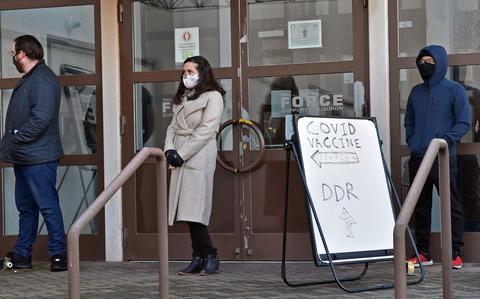 Stars and Stripes is making stories about the coronavirus pandemic available for free. See more stories here. Sign up for our daily coronavirus newsletter here. Please support our journalism with a subscription.

The Army and Air Force did not prioritize overseas service members and dependents who did not have other COVID-19 vaccination options, which led to lengthy distribution delays at many US bases last year, according to a report by the Pentagon’s inspector general.

The report confirmed what many countries like Germany and Japan already knew after waiting months longer for snaps than their counterparts based elsewhere.

The first in line included healthcare workers, first responders, troop deployment and special operations personnel, among others, said the report released Thursday, which examined the challenges faced by DHA between February and May 2021. .

At the time, the coronavirus vaccination was not required for military or DOD civilians, and supply was limited. But shooting has become increasingly available off-base in the United States for a wider portion of the population over the same period, unlike most countries in Europe and Asia.

The Navy told IG it is prioritizing vaccine distribution overseas, including in Europe, while Army and Air Force officials said no. , according to the report.

Sailors and their families in Naples were among the first people in Europe to receive the vaccine, when the command opened up eligibility for recipients aged 18 and over in January 2021. The naval base in Sicily soon followed suit. .

Meanwhile, some commands had difficulty identifying vaccine-eligible civilians and DOD contractors in their treatment area because they typically did not receive military health care. And a lot of people were confused by the system.

In a COVID-19 survey conducted by the IG, 67.44% did not know which tier they belonged to, according to the report.

As a result, “an individual might not know when they were eligible … which could delay them from getting the vaccine,” he said.

The shortage, particularly in Europe, has caused widespread frustration among staff and families waiting months to get their turn for a first shot amid soaring coronavirus infections and lockdowns across the continent.

Officials overseas told IG listeners they had not received enough vaccine doses for their recipients, who relied almost exclusively on the US military for vaccinations.

In March 2021, the military was still only vaccinating people in the highest priority groups.

A month later, an official at an unidentified military treatment center overseas said the clinic needed more than 20,000 doses to fully vaccinate those in the two main priority categories, but was only receiving 1,000 doses per week, according to the report.

Vaccine supplies have stagnated even in some overseas Navy communities. An official at Naval Base Yokosuka in Japan said people were frustrated because they had no choice but to wait for the vaccine through the DOD.

Yokosuka was one of five overseas sites visited by the IG team. The others were Naples and Caserma Ederle, Italy; Ramstein Air Base, Germany; and Kadena Air Base in Okinawa.

As of May 10, it had provided enough vaccines for 80% of the eligible population to receive their first vaccine, according to the report.

But the delays caused widespread discontent in many military communities at the time.

“I feel like we’ve been let down by the Ministry of Defence,” a military wife in Belgium told Stars and Stripes in March 2021 on condition of anonymity due to fears of repercussions for her family.

The IG recommended that the Director of DHA review the issues encountered during the distribution of the COVID-19 vaccine and determine ways to better support future responses to the pandemic.

The DHA disagreed with the recommendation, noting that it had already prepared an after-action report. He said he meets weekly with various agencies to review and improve vaccine distribution.

Jennifer reports on the U.S. military from Kaiserslautern, Germany, where she writes about Air Force, Army, and DODEA schools. She has previously had assignments for Stars and Stripes in Japan, reporting from air bases in Yokota and Misawa. Prior to Stripes, she worked for daily newspapers in Wyoming and Colorado. She graduated from the College of William and Mary in Virginia.