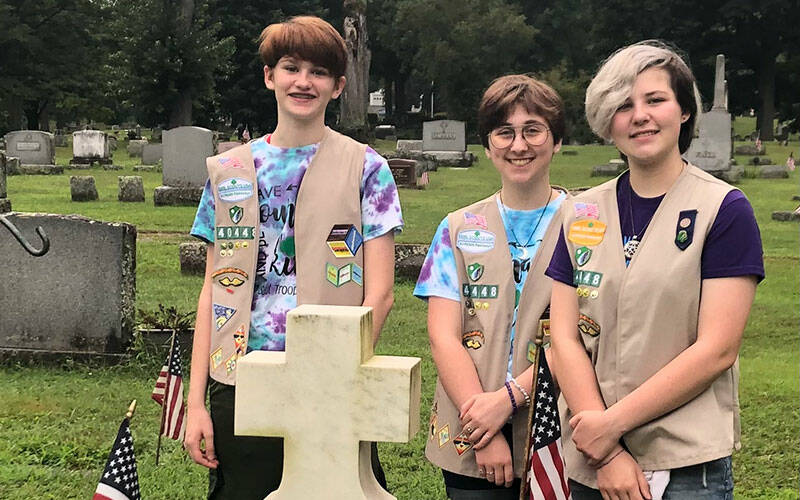 Recognition and honor for deceased veterans. One prize for three local Girl Scouts. An invaluable database boost for a Catholic parish.

All of these things were born from a chance encounter in a Palmyra cemetery two years ago. Shortly before Memorial Day in 2019, Girl Scouts River Sirianno, Morgan Adamson and Audrey Wimer and their troop leader, Sarah Wimer, were helping local Boy Scouts place flags next to Veterans’ graves in Palmyra Cemetery. This cemetery adjoins the Roman Catholic cemetery of Sainte-Anne, and the Girl Scouts inadvertently stopped by Sainte-Anne and continued their work there.

They quickly encountered St. Anne’s keeper, Dan Wilkins, who told them they had moved away from Palmyra cemetery, and noted that he and his wife, Kathy Wilkins, usually placed flags next to the Veterans’ graves in the Catholic cemetery, but had not done so yet. River, Morgan and Audrey decided they wanted to share this tribute work to the deceased veterans, especially as they were looking for a project to complete in order to win the Girl Scout Silver Award, which is the second most raised in Girl Scouts. While the highest award – the Gold Award – recognizes the individual achievements of Girl Scouts and is roughly equivalent to the Eagle Scout Award in Boy Scouts, the Silver Award is given to a team of college girls who identify and complete a project that benefits the community.

“The Silver Award is just as much work, but it’s split between several girls,” Wimer explained.

Audrey, River, and Morgan decided to focus their project on St. Anne’s Cemetery, where they not only put flags on veterans’ graves, but also purchased and installed special stands for these flags. These brackets raise the flags several inches, making them more visible, and also protect the flags from mower damage and normal deterioration that results from being in the ground, extending the life of each flag. , said Wimer.

The Boy Scouts’ project ran into a problem almost immediately, however, when they tried to figure out how many standard bearers they needed to buy and realized the cemetery had no record of how many veterans are buried there. nor the location of these graves. They performed a physical audit of the entire cemetery and recorded relevant information on each of the nearly 2,500 graves, Wimer said.

“We had to go to the cemetery at least 10 times to do everything. It took two years because of the pandemic, ”Morgan recalled.

“We realized there were a lot more veterans in the cemetery than we thought. There were almost 200, ”added Wimer. “It was bigger than the girls thought, but they did it. We were on a one-year hiatus due to the pandemic. The fact that they picked it up and continued was awesome.

Wimer and the Boy Scouts compiled all the information into an Excel spreadsheet, then began to evaluate the flag bearers, which were more expensive than they had expected. They organized a fundraiser for cans and bottles and received grants from several civic organizations, but the majority of the costs were covered by the money the troop made from selling Girl Scout cookies at the over the years, Wimer said.

Audrey, Morgan and River, who are now 14, bought the flag bearers and installed the flag bearers and flags over the summer. The Boy Scouts bought plastic bins to store the racks during the winter months when not in use. However, they took their project to the next level by providing their electronic database to St. Katharine Drexel Parish, which operates St. Anne’s Cemetery, said Kathy Wilkins. The girls also printed hard copies of the information, organized it in binders, and gave the binders to the Wilkins so they could help anyone who might come to the cemetery looking for specific graves.

“In fact, they printed every person in our cemetery by last name or by section. They have maiden names in there, nicknames, date of birth, date of death, ”Wilkins said. “I don’t know how to thank these three young women. It is truly an incredible gift that they have given us.

The desire of the three daughters, none of whom is Catholic, to help the parish honor its veterans is inspiring, said Mary Capone, financial director for Catholic parishes in Wayne County.

The girls, meanwhile, said it was gratifying to know that parishioners and community members appreciate their hard work.

“It was good, because you hear stories on the news about how kids make a difference and everything, but being one of those kids was really good,” Audrey said.

South Korea, US quietly hold joint air exercises amid calls for talks with the North