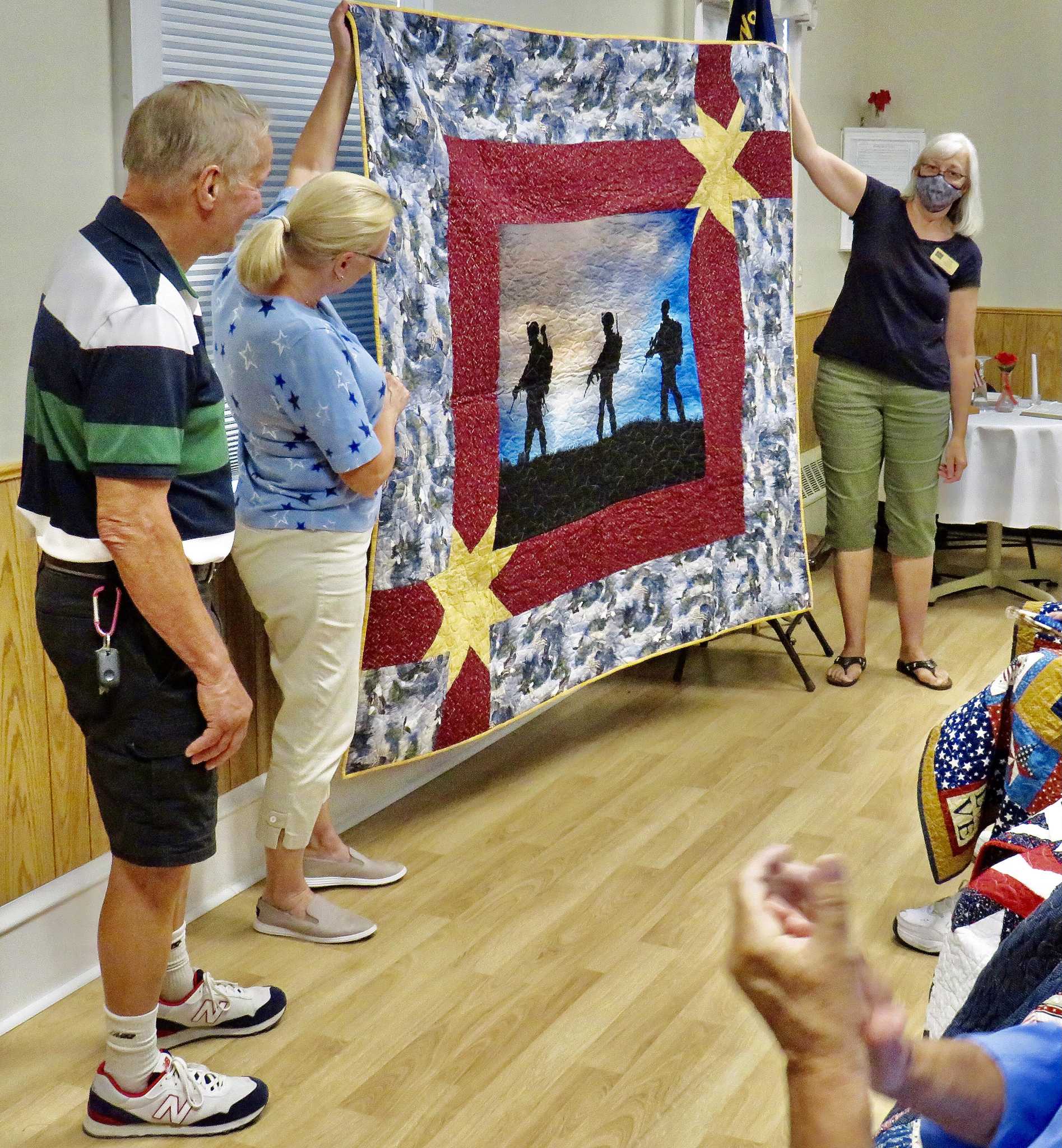 By the time Ronald Miller and his wife Noreen showed up for the Quilts of Bravery Ceremony at the American Legion in Clinton, an hour late, nine military veterans were milling around the main room, wrapped in vibrant quilts and accepting the congratulations from family and friends.

It was then that host Jane Dougherty’s voice rose above the hubbub.

Dougherty, along with Nancy Burns of Old Saybrook, represented the Quilts of Valor Foundation, which blankets war-affected military and veterans with ‘healing quilts’, as she put it, made by teams of volunteers .

“Everyone,” Dougherty said, “Ronald Miller was able to come, he and his wife came from Norwalk and got lost and they’re here and we’re going to honor him pretty much the same way we honored everybody. “

Everyone applauded. Many of the 75 people present remained, including Charlie Miller, who had been awaiting the arrival of his older brother and sister-in-law since the presentation began.

There was also Joe Rand from Clinton, who served in the Navy during Vietnam.

“It’s a work of art,” he said after the ceremony, of his quilt, which was intricately patterned with squares of white and red stripes, as well as white stars on a blue background. . “These are all works of art.”

Beside him was Robert Crum of Branford, an Army security officer stationed in Japan and Turkey from 1962 to 1964.

“The quality is just amazing,” he said.

“I was between the wars, but when you consider the troops coming back from Korea and Vietnam, it has nothing to do with WWII. There were no parades for those guys. There was nothing. For these people to do this for us, it’s unbelievable, really unbelievable,” Crum said.

Robert Nettleton, a member of the 101st Airborne who served the Army from 1962 to 1965, uttered a similar refrain.

“It’s time for something to come back to us,” he said, as most of the attendees returned to their seats, with Ronald Miller and the Miller family in front of the room.

For Charlie Miller, it’s no wonder so many people stayed.

Their father died in 1962, he said. Charlie was 5 years old. Ronald was 20. “I’m 65 and he’s 80,” Charlie said. “There are 15 years and seven days that separate us, but we talk to each other, we look alike.” Among seven children, Ronald was the eldest. “He helped our mother buy a house and helped her raise the rest of us.”

It’s one of the reasons, Charlie said, “he was always the person I looked up to.”

When Ronald was in Vietnam, serving in Cam Ranh Bay as part of the Army’s Fifth Cavalry Regiment Quartermaster Corps, “it was a big deal for me to have a brother in service”, said Charlie, who was going to join the Navy. from 1975 to 1979. “I used to show pictures to all my friends and all my teachers.”

There was that too. “Before he went to war, he took some of his tools and he put together a toolbox for me,” he said. “I wasn’t much older than 7 and it was my first toolbox and I just retired as a Subaru mechanic after 42 years.”

A few months ago, he was working on the Subaru of Bobbi Racette, a Branford resident involved in several military and veteran support initiatives.

“My husband and Charlie started talking, and we had just gone to a [quilts of valor] ceremony, and he was telling Charlie about it,” Racette said, watching Dougherty wrap Miller in a blue and yellow plaid quilt. “That’s when we heard about his brother Ron.”

Soon Miller, along with his wife Noreen and Charlie, was posing for pictures.

“I’m glad you made it,” Dougherty said.

“Me too,” Noreen replied. “What a privilege. It made me cry.”

If you know a veteran you would like to honor, visit www.qovf.org, find the “take action” tab and click on “request a quilt”.