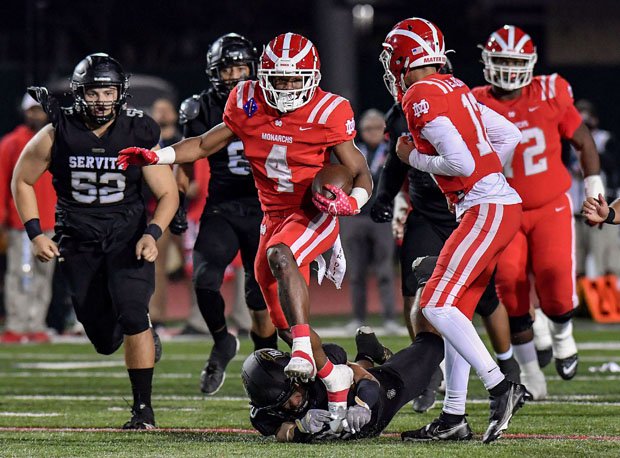 Rushed attack, the defense clears the way for the Monarchs to participate in the CIF Open Division Championship game.

Quincy Craig, Raleek Brown and Ajon Bryant each rushed for touchdowns as the Monarchs (11-0) beat the Friars for the second time this season and the 11th time in a row while qualifying for the Championship game of the open division CIF against a future – decided the enemy of northern California on December 11. It was the third crown of the southern section of Mater Dei since 2017.
In that one, Raleek Brown rushed for 163 yards, Craig added four rushing touchdowns and sophomore quarterback Elijah Brown threw for 247 yards to make up for a huge night from Servite’s Noah Fifita, who has pitched for over 300 yards and two touchdowns, both off Oregon. Tetairoa McMillan.

Mater Dei senior runner Raleek Brown ran for 162 yards and a touchdown in 24 carries as the Monarchs beat Servite 27-7 on Friday.

This one did not look like that at all. Only the winner.

Servite took over at Monarchs 28 and a few games later Fifita found McMillan on a 3-yard touchdown pass, making it 7-0. The two had connected 15 times for 163 yards and two scores in the first meeting.

Craig equalized the game at the end of the first quarter on a 3-yard run, then landed a big third-down reception for a first down on Mater Dei’s next possession, setting up a long run from Raleek Brown. That, in turn, set up another long, 27-yard touchdown from Bryant, giving Mater Dei a 14-7 advantage midway through the second quarter.

Servite appeared to be attempting the equalizer, but Craig succeeded again, this time on the defensive end. He forced a fumble recovered by Cameron Sidney at Mater Dei 15. The Monarchs ran out of time to finish the half.

When Raleek Brown scored on a one-yard run late in the third quarter to move up 21-7, the Monarchs then relied on their stingy defense which included an interception by Jeilani Davis deep into Mater Dei’s territory and two David Bailey bags.

The Monarchs have gone to Raleek Brown often and the Oklahoma-linked four-star fullback delivered, rushing 24 times for 162 yards. Elijah Brown finally sealed the game with two minutes left on a 27-yard touchdown to receiver CJ Williams to Notre Dame, making it 27-7.
In addition to playing the role of frontrunner, Mater Dei played most of the week with extra weight after the Orange County Register reported an alleged hazing incident last spring. This made regional and then national news. Instead of talking about the game for the title, a lot focused on the allegations.
The Monarchs put everything aside and now face an unknown foe after Central Coast section favorite Saint Francis (Mountain View) was upset by Serra (San Mateo) 16-12 in the game for the Division I title and that Rocklin was beaten 20-3 by Folsom in the Sac-Joaquin sectional division championship contest. Now Serra or De La Salle (Concord) appear to be the favorites to be the Monarchs handpicked opponent. This decision will come from the 10 CIF commissioners on Sunday.

Hoi Hansen (45) was pierced by Quincy Craig forcing a fumble at the end of the second quarter. 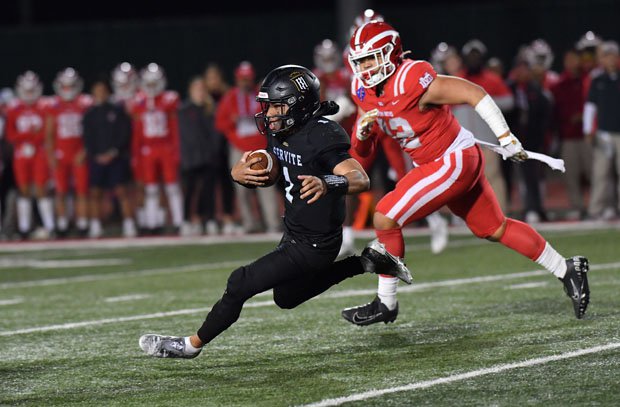 Quincy Craig with a touchdown in the first quarter for Mater Dei.