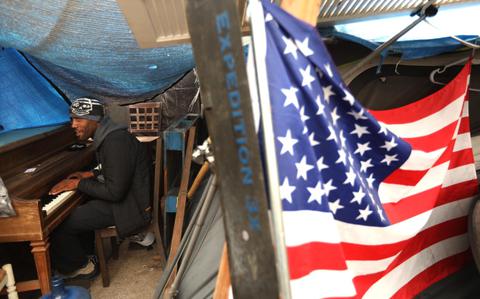 Veterans Affairs Secretary Denis McDonough, who visited the encampment in October, said last week that all 40 or so veterans on Veterans Row would be housed. by November.”/>

Iraq War veteran Lavon Johnson, 35, plays the piano inside his tent along Veterans Row along San Vicente Boulevard in an unincorporated area near Brentwood on October 30, 2021. Johnson was stationed at Fort Hood and deployed to Iraq in 2006 and 2007 and has been living homeless on Veterans Row for about a year. When asked why he thought it took him so long to get help from the veterans, Johnson was quick to respond, â€œPride. Money. No one wants to admit that. a mistake has been made. ” He will be transferred to an individual tent on the Virginia campus before the camp clean-up begins on November 1. Veterans Affairs Secretary Denis McDonough, who visited the encampment in October, said last week that all 40 or so veterans on Veterans Row would be housed. by November. (Genaro Molina, Los Angeles Times / TNS)

LOS ANGELES (Tribune News Service) – Two days before the impending move and Lavon Johnson had yet to pack his bags.

But the Iraq war veteran didn’t seem too worried as he sat at the piano he had retrieved from the trash two blocks away. He started playing Beethoven’s “FÃ¼r Elise” along San Vicente Boulevard near Brentwood. His American flag – held on one side by a hanger attached to his tent – fluttered in the breeze.

Johnson was planning to be the last to leave the Veterans Row encampment, where he has been living for about a year. His way of making sure the nearly two dozen remaining unhoused veterans are safe before a cleanup scheduled for Monday.

“It never takes me long to prepare myself,” said the 35-year-old with a quick smile.

Veterans Affairs Secretary Denis McDonough, who visited the camp in October, said last week that the 40 or so veterans on Veterans Row would be housed by November.

Already on Saturday, 14 people had moved off the sidewalk into tents on the sprawling VA campus, said Robert Reynolds, a senior AMVETS lawyer. Three more have registered to enter, but have not yet moved.

â€œIt’s very frustrating that it has taken so long,â€ said Reynolds, an army veteran. â€œThis is all a disservice to the veterans and a disservice to the taxpayer community because these guys are supposed to have benefits. This property is intended for them. They should be accommodated here. There is no reason for them to be all over the streets.

All Johnson has known throughout his life is the military.

Born in Germany to parents in the military, Johnson enlisted in the same branch in June 2004. He was stationed at Fort. Hood and deployed to Iraq in 2006 and 2007.

If you ask him when and how he got to California, he’ll tell you he doesn’t remember. But he can remember what has happened since he’s been here. Especially the year he spent living in the Veterans Row camp.

â€œIt’s like I’ve been sent here,â€ Johnson said, looking at the 20 remaining tents along the sidewalk.

When asked why he thought it took him so long to get help from the veterans, Johnson was quick to respond, â€œPride. Money. No one wants to admit that a mistake was made.

At around 11 a.m., Johnson cycled past the tents, poking his head to check in with some of the veterans. He passed over a dozen flags and a few signs informing everyone of the planned cleanup.

For those who find themselves along the line, Johnson is seen as the protector. He often stays up at night to make sure everyone is safe. A reminder of the danger is scrawled in blue on a wall: RIP Andre.

This site has been linked to two homicides in six months this year. In April, Pedro Flores, 34, was arrested for murder and assault with a deadly weapon after crushing a person living in the encampment, allegedly dragging the man’s body 200 meters under his vehicle. In September, the camp was the scene of a stabbing that killed a homeless veteran.

Reynolds has had more of a nightmare about veterans killed on the streets. The Iraq War veteran once slept in a sleeping bag along the street after not being allowed to participate in a VA program in 2018 because of his service dog.

“I saw veterans all over the sidewalk, no awareness was coming out, the police would come by and take them away every two weeks,” said the 33-year-old. â€œI grew up in a large military family and have always learned to respect veterans. And so, seeing it struck the deepest chord. I just couldn’t believe I was seeing people who were going to fight sleeping on the sidewalk and die here. “

Outside the tents, signs were posted about the plight of homeless veterans: â€œWe fought for you, please fight for usâ€. Black storage bins were placed outside the tents with a sheet to document the inventory for the move.

Reynolds helped set up 20 tents on the VA campus, including new beds, blankets and towels for those moving from Veterans Row. A U-Haul will arrive on Monday to help load everyone’s belongings for storage, if needed.

Ronald Estrada-Ortiz, a Marine Corps veteran, transferred to the VA campus two days ago. He was able to bring clothes and two backpacks with him.

Estrada-Ortiz enlisted at the age of 18 – he graduated from high school on Wednesday and was a Marine on Friday – motivated by the events of September 11.

â€œI’m bleeding in red, white and blue,â€ he said. “I like this country.”

But he expressed frustration at the time it took for veterans to get help, calling it a “money problem.” He also questioned the misperceptions that community members might have about homeless people.

When asked when he was supposed to move, Johnson said he winged it. He no longer likes to make plans.

â€œEveryone wants me to be in there,â€ he said, from his place at the piano. He doesn’t really want to move, but he would still go because, as he jokes, “these guys can’t take care of themselves.”

He only plans to take â€œwhat is strictly necessaryâ€ with him. This includes the piano he saved six months ago.

He points to an information booth on the VA campus. The new home of his piano.