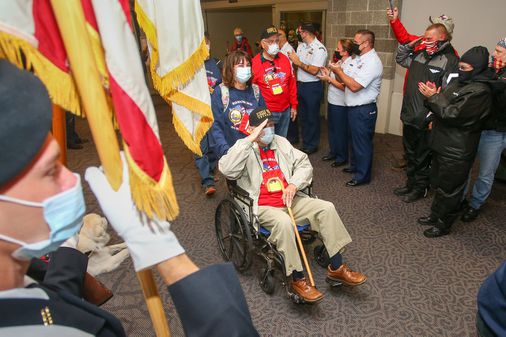 WARWICK, RI – They were once young soldiers, called up from small towns in Southeastern New England to serve decades ago during World War II, the Korean War, and Vietnam.

On Saturday, these 65 veterans, now elderly and some too fragile to walk, gathered for their last military tour.

They are members of the Honor Flight Zulu, organized by the Rhode Island Fire Chiefs Association, and when they arrived at Rhode Island TF Green International Airport before dawn, crowds of loved ones and strangers alike. were waiting.

As professional Rhode Island bagpipes and drummers played, honor guards from the police and fire departments, as well as young members of the military stood and saluted. They said “thank you” over and over to the elderly veterans who passed by. Some of the veterans, even those curled up in their wheelchairs, raised their hands in greeting.

There was Peter Ricci, 101, who had been a Navy minesweeper on the USS Superior (AM311) in the Pacific. They were 100 miles from Japan by the end of the war, and when they heard the news, Ricci said, he recalled how â€œthe sky looked like July 4th. We were so happy.

Now great-grandfather, the man from West Warwick has said he has been looking forward to this honor robbery for years. He will be joined by his son, who served as a submariner during the Vietnam War.

Father and son don’t talk about wars. But they would finally see the memorials built to honor their sacrifices. They would be with other men and women who understood what they had been through.

â€œI’ll be proud of them all,â€ Ricci said of his fellow Honor Flight veterans.

Honor flights bring veterans and their guardians to Washington, DC, to tour war memorials and tour Arlington Cemetery, then take the time to make a special “mail call,” where they receive cards and letters from relatives.

â€œI’m frankly thrilled,â€ said retired Providence Fire Chief George Farrell, who directs the honor flights. â€œYou can see a day that will change the lives of so many people, veterans and their familiesâ€¦ It’s hard to describe it to people. “

It was the first honor flight to take off from Rhode Island since the start of the pandemic. Some of those scheduled to fly in March 2020 have since died, and others have become too fragile for the 5-hour trip.

They made adjustments for the pandemic. All veterans, their guardians, doctors and all accompanying staff are vaccinated. The buses have been disinfected. The flights were booked just for them.

There are 14 WWII veterans, including two 101-year-olds, 24 Korean War veterans in the 80s and 90s, and 22 Vietnam War veterans. Each of the veterans has their own â€œguardian,â€ usually a relative or friend, to accompany them on the journey. As of Saturday, 20 of the guards were also veterans or serving military personnel, including three who served in Vietnam.

Air Force veteran Peter Barilla, 87, of East Providence, had joined the service in 1952 and traveled to Korea, and had spent four difficult years away from his family. “He had most missed not being able to return home,” said his wife, Sandra.

Barilla was excited about the steal of honor, but almost felt like he had to give way to another veteran who had been in the war, his wife said. His family convinced him otherwise. His son-in-law Tom Guthlein, who had served in the Coast Guard, had accompanied his own father, a World War II veteran, on another honor flight years ago. â€œIt was one of the best experiences he has ever had,â€ said Guthlein.