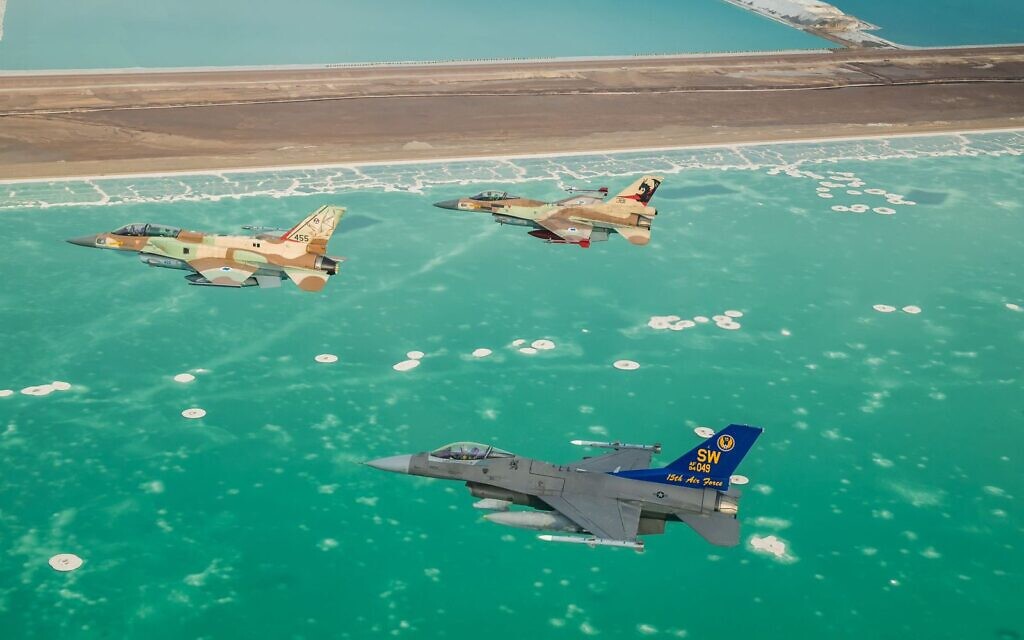 The exercise, dubbed “Desert Falcon”, was the last organized by the IDF and the Middle East-based CENTCOM, after Israel officially entered the latter’s area of ​​responsibility last year. Previously, the IDF worked primarily with the US European Command, as Washington feared that Arab countries in the region would oppose cooperation with CENTCOM if Israel did too.

“Israeli air crews flew ‘side-by-side’ with US crews and simulated joint responses to air threats and strikes on targets, through education, cooperation and mutual growth,” the IDF said.

“The exercise represents an important step in strengthening international strategic cooperation between Israel and the US Air Force, and it contributes to the preparation of our troops,” the Israeli military said.

Although partly symbolic, Israel’s inclusion in CENTCOM is meant to allow easier direct communications between the Israeli military and US troops in the region and, through the US, other armies as well.

In November, for example, the Israeli Navy took part in a major CENTCOM maritime exercise led by the US 5th Fleet, alongside the United Arab Emirates and Bahrain.

Two Israeli F-16 fighter jets and an American fly side by side during a joint exercise in southern Israel in January 2022. (Israel Defense Forces)

In the immediate term, this is largely aimed at improving the IDF’s ability to cooperate with the United States and other Middle Eastern countries to counter Iran.

CENTCOM officially assumed responsibility for military-Israeli relations last September, although Israel has continued to hold exercises with US European Command.

Are you serious. We appreciate that!

We’re really glad you read X Articles from The Times of Israel over the past month.

That’s why we come to work every day – to provide discerning readers like you with unmissable coverage of Israel and the Jewish world.

So now we have a request. Unlike other media, we don’t have a paywall in place. But since the journalism we do is expensive, we invite readers to whom The Times of Israel has become important to help support our work by joining The Times of Israel community.

For just $6 a month, you can help support our quality journalism while benefiting from The Times of Israel WITHOUT ADVERTISING, as well as access to exclusive content available only to members of the Times of Israel community.

We will not forget our fallen soldiers, abandon veterans, says Sanwo-Olu