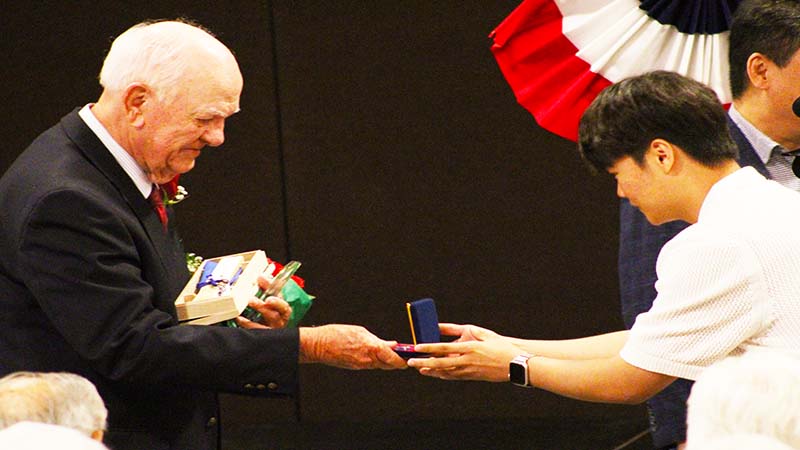 OPELIKA — Eight Chambers County veterans who served in the U.S. armed forces during the Korean War were honored Saturday at a ceremony at the Bottling Event Center in Opelika.

The event was organized by Ajin USA, a local Kia supplier. After two years without holding the ceremony due to COVID-19, the company celebrated its eighth year of honoring local veterans who served in the Korean War.

The keynote speaker for the ceremony was Debbie Wood, who represents District 39 in the Alabama House of Representatives.

Wood began her speech by explaining how grateful she was to Ajin USA and how they created jobs in Chambers County after the textile mills closed.

“We had basically lived 100 years as textile manufacturers in Chambers County and when they closed we lost a lot of jobs in our community,” she said. “When Ajin arrived, it revitalized the labor market and greatly developed our county.”

Wood went on to thank the veterans and their wives for their sacrifices, noting that they were protecting both the United States and South Korea.

“You have all sacrificed so much not only for our country but also for their country,” Wood said, pointing to Ajin’s representatives. “I thank you all for your sacrifice, for what you have given and for allowing me to be here today.”

Following Wood’s speech, attendees watched as members of the Korean Cultural Center in Atlanta gave several performances reflecting Korean culture, including two dances, a drum set and a song on the gayageum, a traditional Korean string instrument. They were followed by students from Daegun High School in Korea, who sang several songs in honor of veterans.

The program ended with a speech by Jung Ho Sea, CEO and President of Ajin USA. Sea expressed his gratitude for the veterans and their dedication to democracy.

“More than five decades ago, people present at this ceremony who had never heard of South Korea went there to protect South Korean democracy. For that, I am eternally grateful,” did he declare.

Sea, along with students from Daegun High, presented an award to Lanny Bledsoe, who accepted it on behalf of all veterans in attendance. Sea said he hoped to see them all again next year and gave them each a gift bag from Ajin.