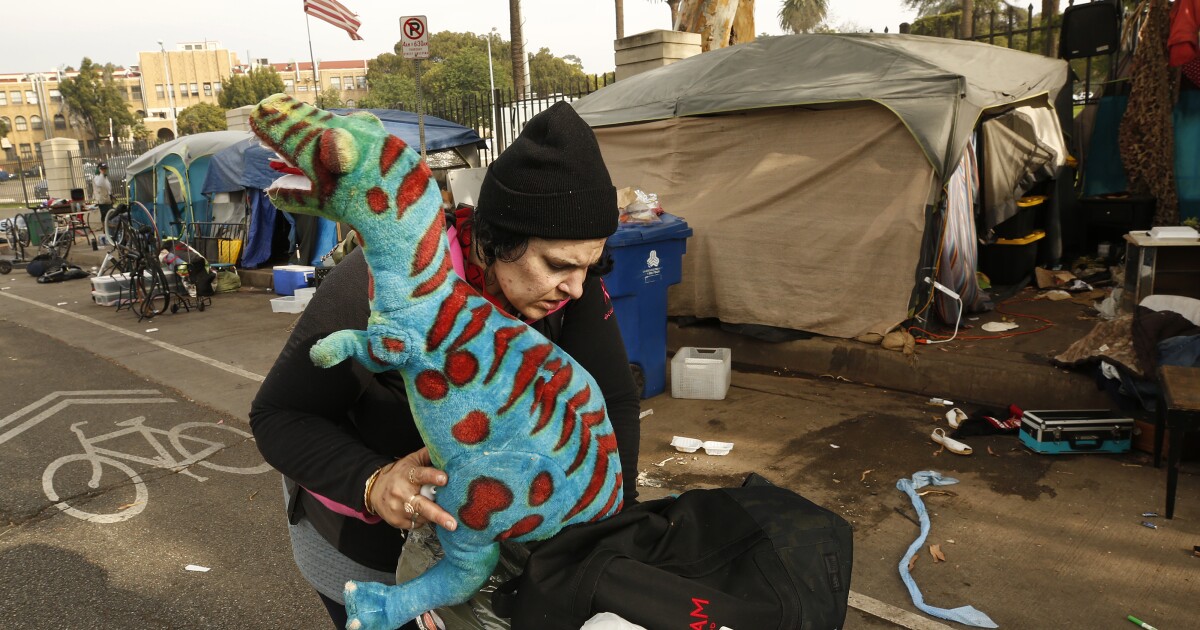 A bulldozer roared outside GemBob Brookhyser’s tent on Monday morning as he pulled on an extension cord caught in a tangle of his belongings. Half a dozen veterans from the Veterans Row homeless settlement along San Vicente Boulevard rushed to put their belongings in trash cans and in moving vans driven by volunteers.

Tensions were high on move day at the camp, which sits along the perimeter of the historic Veterans Affairs campus near Brentwood. About 4,000 county veterans are homeless and about 40 have been living at Veterans Row camp for several months.

The effort was the byproduct of several months of raising awareness in the homeless veteran community, said Robert Reynolds, an advocate for AMVETS, the veterans services organization. Advocates say they have met veterans on the streets to prepare them to leave the encampment and move into a temporary tent village on the VA campus itself. The process could be shocking.

“You get one veteran on the inside, another appears,” Reynolds said. The lack of resources offered by the federal Department of Veterans Affairs has resulted in a steady increase in the homeless veteran population, he said, resulting in encampment off campus.

Volunteers say the next step is to hold the VA accountable for its promise to find veterans housing and ensure that the tent village on campus doesn’t become another forgotten Veterans Row. The VA intends to move the veterans to a small village on campus once it is completed. Several mini-houses are already occupied by veterans, but dozens more need to be developed.

“It’s maddening and heartbreaking because for so long these veterans have been forgotten,” said Diego Garcia, an outreach volunteer and military veteran working with AMVETS.

“I think one of the things we’re really trying to do is focus on focused awareness with individuals,” VA Medical Center director Dr. Steven Braverman said after the camp was cleaned up. “We try to understand that sometimes people have to be treated as comrades, as part of a community, and try to keep people comfortable as they transition and work with them.”

The number of veterans at the San Vicente encampment has fluctuated, but a count last month estimated it at around 40. As of Monday morning, only six veterans remained at the Veterans Row encampment.

Brookhyser, a U.S. Army veteran, was quick to move his items before an LA County bulldozer came and scratched the tent he lived in last year.

“It was surreal,” said Brookhyser, 52, describing his time at the site. “All these people have this fantasy [homes] and they don’t want us here. Even if this property belongs to us. This is why we have to endure what we always endure. They threw me water, beer. These people honk their horns, they harass us. Without reason.”

As the bulldozer crushed furniture and a metal shed, Rick Reeves Jr., another Army veteran, paced the tent where he had lived for two years.

“It could have been a lot worse,” he said. “Most of my stuff is already ready for storage. I am ready to go from here. It was a real mess down the line.

Volunteers have helped veterans load their belongings onto moving trucks and some will be able to use the storage space on the VA campus, Reynolds said.

Douglas Bue, 65, went through the cleaning in a wheelchair. He laughed at the scene around him, where he lived last month.

“Look at this. No human being deserves to live like this,” said the military veteran. “They have good clean property. They can give three meals a day. They deserve better. It’s a lack of care for war People don’t love veterans the way they should, they don’t love each other the way they should.

More than 40 veterans were living on Veterans Row when LA County Sheriff Alex Villanueva announced plans to clear the camp earlier this year. Since then, volunteer groups and advocates have met with the veterans to facilitate their move to the VA campus, which dates back to 1888 and covers some 400 acres. More than 20 tents have been set up on campus, as well as the small village of mini-houses.

The goal is to find more permanent housing for the veterans who are now in the makeshift camp on campus, said Sheriff Lt. Geff Deedrick. Much of the work has been focused on outreach and relationship building with veterans.

“It’s about compassion and understanding,” said Deedrick, who heads the department’s homelessness services.

Surrounded by the drone of the bulldozer and sheriff’s deputies, Villanueva said, “Camping people on the street is not an option. “

During the cleanup, several veterans became emotional, calling the lack of support they received from the larger VA organization overwhelming. A veteran, who said he would leave when he was ready, shouted that he was being left for dead by his country. He grabbed her head and arms, not asking anyone in particular to make room for her.

Members of Parliament and volunteers watched the veteran come out of his tent, asking what they were watching. He stood outside his tent as the bulldozer descended the line and cleaned up the adjacent tents. Shortly after 2 p.m., he gave in and went out with his things. Volunteers helped him pick up several items on the VA campus.