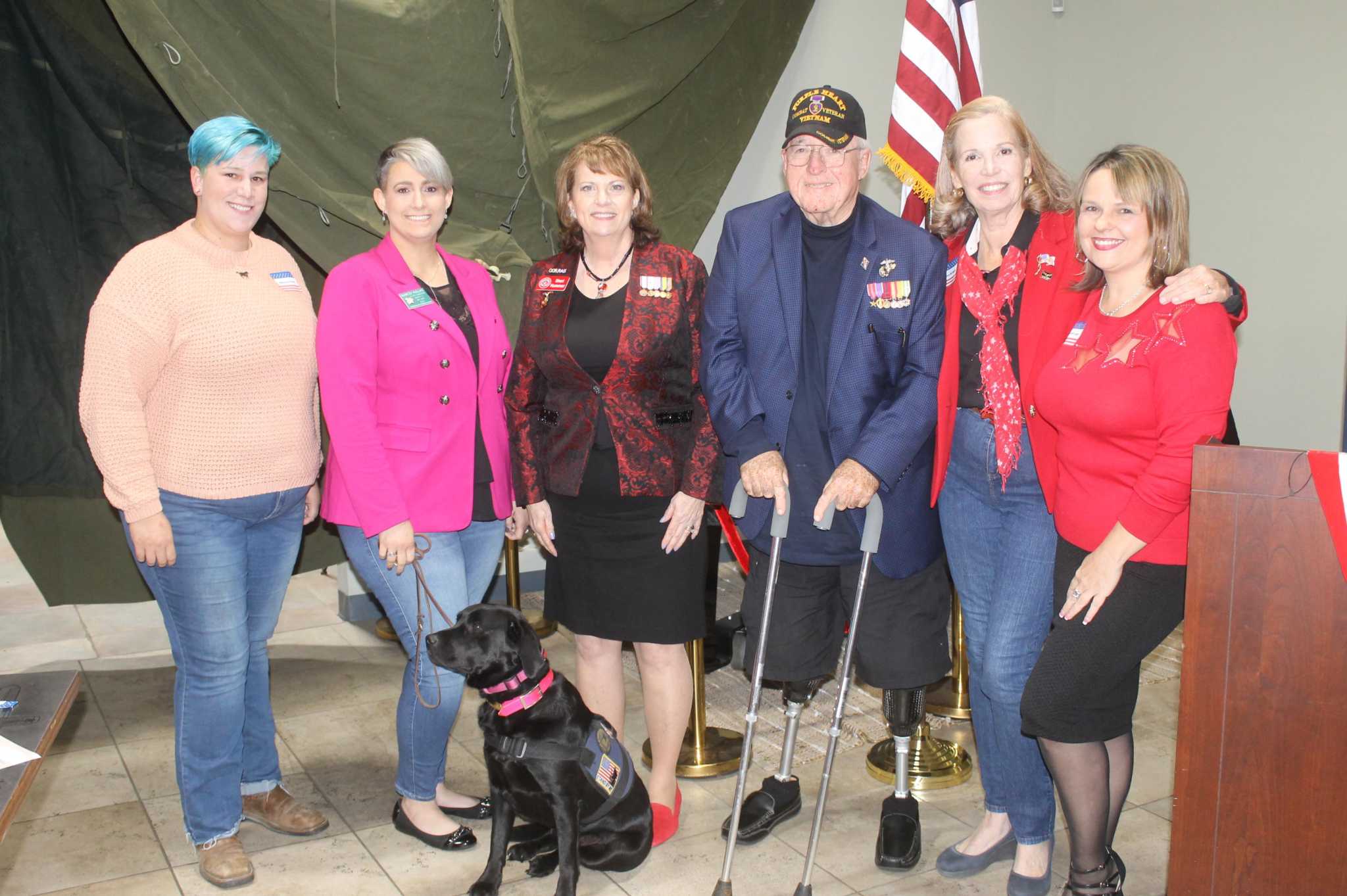 The recent Lake Conroe Area Republican Women Reunion not only shed light on some very special people, veteran trailblazers and veteran organizations in Montgomery County, but also held at a very special place, the Honor Cafe owned and operated by veterans.

Following the U.S. and Texas flag pledges, LCARW Vice President Brandie Lopez introduced the evening’s inaugural winner, Marcey Phillips, a U.S. Army veteran who fought in Operation Iraqi Freedom with a mastery of secure and non-secure communications. Since completing her service, Marcey has discovered that her passion is to continue to serve her community through volunteerism.

Although she is involved in 10 organizations, her passion is serving veterans through veterans of foreign wars. Since joining VFW in 2006, Marcey has served 18 elected and appointed positions and is currently the junior vice-commander of Texas VFW Post 4709 at Conroe. Marcey is also a strong supporter of service dogs which are used to help veterans return to their new normal, and she has one herself, Donut. Marcey is also married to a veteran, Scott, who also has a service dog.

Marcey shared with us that Veterans of Foreign Wars, originally founded in 1899 as the American Veterans of Foreign Service, continues to be a voice for veterans, currently deployed members of our military, and their families. . VFW’s mission is to foster camaraderie among American veterans of conflicts overseas and to serve our Veterans, the military and our communities and to advocate for the interests of all Veterans. For more information, call VFW Post 4709 at 936-703-3316 or go to [email protected]

Next to be honored was retired Brigadier General Connie McNabb, who served in the US Air Force and the Texas Air National Guard in various roles; Texas Military Department Adjutant General Chief of Staff, Medical Planner, and Texas State Guard / Medical Battalion Commander to name a few. Connie also holds a doctorate in veterinary medicine from Ohio State University and a graduate certificate in nonprofit management from the Bush School of Texas A&M.

Connie then spoke about her favorite nonprofit, Lone Survivor Foundation, whose mission is to provide veterans and families with a way to heal from their invisible wounds. According to Marcus Luttrell, â€œWe have to make sure that the hell the veterans come back from is not the hell they come home to. This is what was promised and this is what is deserved. Period. â€For more information, call 936-755-6075 or go to [email protected]

The next honored veteran was Captain Sheri Hummer, who served as the United States Navy and is currently Military Co-Chair / Marine Corps Scholarship Foundation-Lone Star College. Sheri supports many community and service organizations and among them is the Marine Corp Scholarship Foundation, a national organization. But one of his favorites is the Texas Marines Medal of Honor and Combined Arms.

Next, Brandi introduced Maureen Friedly, a United States Marine Corps veteran and current member of Sunny Creek Ranch, an equine therapy ranch that offers therapy and counseling by licensed and certified professionals at no cost to veterans. the United States.

Sunny Creek Ranch, Horses for Heros, is a 501v3 veteran-run nonprofit that understands the unique needs of our heroes and their families. This program is run by licensed and certified professionals and is not just about time with the horses. He offers therapy that makes a real difference in the lives of these veteran heroes. According to Maureen, â€œThey care. They understand. They went that way. For more information, call 281-229-3633.

And finally, Judge Jimmie Edwards. As they say, “Once a Marine, always a Marine. And once a judge, always a judge! But before he was a sailor, Jimmie worked on Capitol Hill as a page of Congress in the United States House, in the Senate American, then to the Supreme Court under President Lyndon Johnson. In 1968, after witnessing the riots in Washington DC, he decided to join the Marines. In just a few months, he found himself in the middle of the war of Vietnam, was injured and lost both legs in 1969. He went on to serve as the State Representative and our County Judge here in Montgomery County. Justice Jimmie continues to help our community in many ways and l One such initiative is as president of the Veterans Memorial Park.

MCVMC’s Vision: To honor United States military veterans and their families, who, along with their allies, sacrificed themselves and served in the cause of liberty, liberty and justice. Their Mission Statement: The Montgomery County Veterans Memorial Commission is a non-profit organization dedicated to educating, enlightening and enriching our youth, families and communities in this state and this nation to the services, experiences and sacrifices of our United States veterans and first responders.

What a wonderful and inspiring program. For more information on Republican women in the Lake Conroe region, contact President Lorena Garcia [email protected]