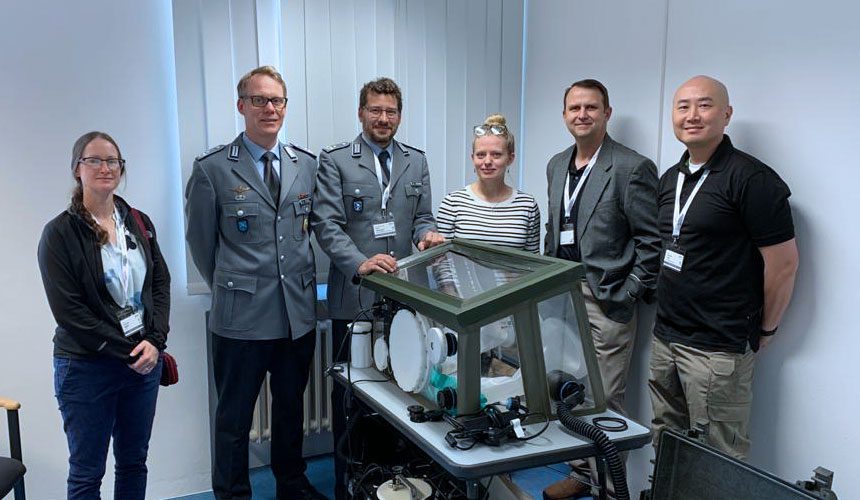 The 17th Medical Biodefense Conference was held this month at the Bundeswehr Institute for Microbiology in Munich, covering topics such as epidemic management, biosafety and dual-use research of concern.

More than 450 guests, including military science officers and scientists from 41 different countries, attended the conference in hybrid format with both in-person and virtual attendance.

The conference focused on a wide variety of medical topics, ranging from epidemic response and management to vector-borne diseases and zoonoses.

Lee said 1st AML leaders discussed future training opportunities with the US Army’s Europe-Africa Surgery Cell. The command is also coordinated with the institute where the biodefense conference was held.

“The 1st AML and the German Institute for Microbiology of the Bundeswehr are already coordinating bilateral training opportunities in the near future,” said Lee.

Maj.Christine Hulseberg, PhD, Senior Science Officer at the U.S. Army’s Directorate of Medical Research – Georgia in Tbilisi, Georgia, met with leaders of the 1st AML during the conference.

Hulseberg has served with the 1st AML before and knows the value command can bring to any area of â€‹â€‹operations.

The senior science officer said the first AML biological threat assessment team can help allies detect and identify a long list of pathogens of concern in the region. Hulseberg deployed with the 1st AML at Camp Humphreys, South Korea, in support of the COVID-19 response in 2020.

“One of the most important but underestimated strengths of the Biological Threat Assessment Team is the team-based approach it relies on to develop test plan strategies and interpret results,” said Hulseberg said. “It’s really powerful and adaptive and draws on the multidisciplinary backgrounds of the infectious disease physicians, microbiologists, lab technicians and veterinary pathologists who make up this team.”

The US military‘s unique laboratory has often deployed to support military operations, including the 2014-2015 effort to contain the Ebola outbreak in West Africa. Soldiers from the 1st AML also served in seven different locations overseas to support the response to COVID-19, including US military hospitals in Germany, South Korea and Japan.

The 1st AML is part of the 44th Medical Brigade based out of Fort Bragg, North Carolina, and the 20th Chemical, Biological, Radiological, Nuclear and Explosives Command (CBRNE).

â€œThe German biodefense conference was a great opportunity to forge stronger partnerships across the region,â€ said Col. Matt Grieser, commander of 1 AML. â€œWe look forward to future exercises to support the US Army Europe-Africa, as well as continued collaboration and training with the German Microbiology Institute of the Bundeswehr and other partners in the region. By leveraging our collective expertise, we can better protect our common interests.