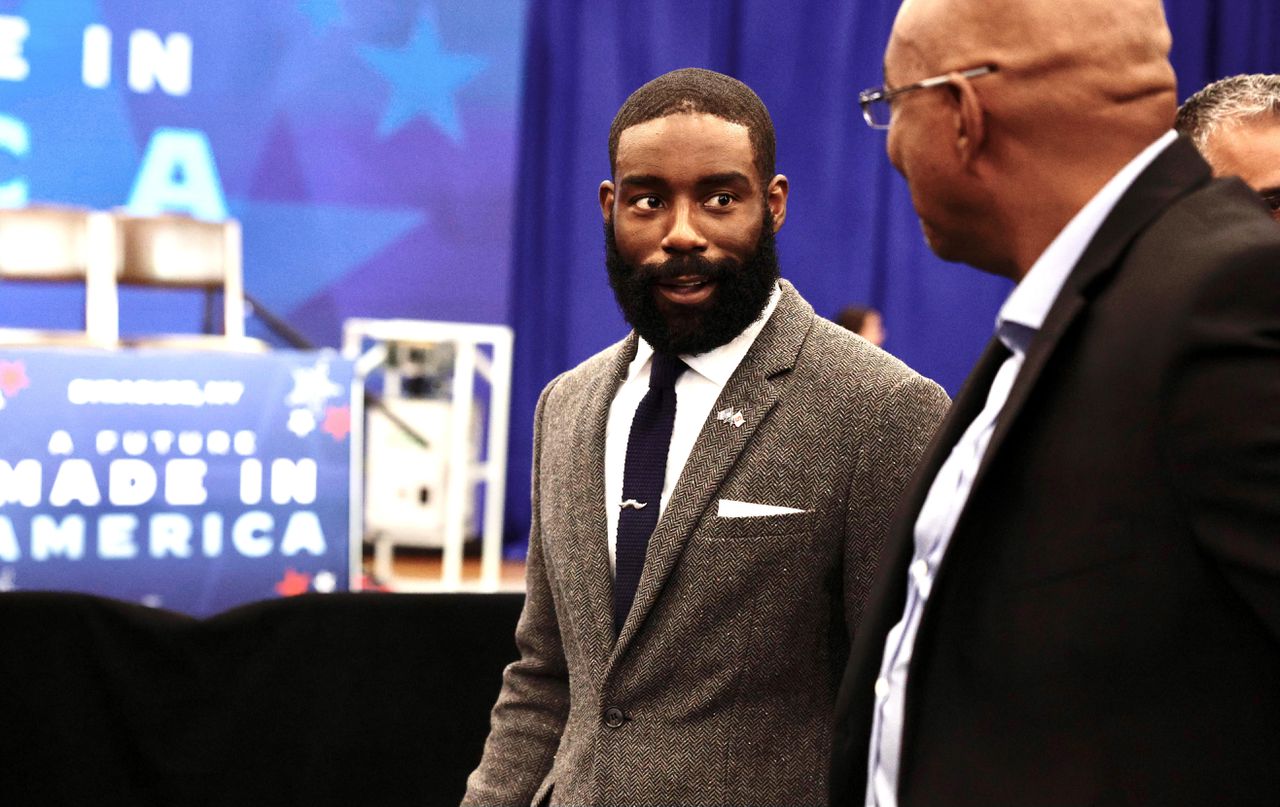 He told them about Savion Pollard, a 30-year-old student who worked as an engineer on the Navy’s nuclear submarines. He is now studying electrical engineering. In his spare time, he is a big brother to a boy through a Syracuse organization.

Haynie, founder of SU’s D’Aniello Institute for Veterans and Military Families, thought the meeting — along with other local leaders — was just a chance to get the attention of Micron executives. . But when they asked to see Pollard’s resume, he proudly agreed.

Pollard is now Micron’s first hire for its massive computer chip complex to be built in Clay. Micron has pledged to invest $100 billion over 20 years in the project which would eventually employ 9,000 people at its plants and create another 40,000 jobs in Onondaga County.

Pollard and hundreds of others gathered Thursday at Onondaga Community College to celebrate the historic deal with top Micron officials and President Joe Biden. Pollard was honored by a Micron executive as the first of thousands of hires to come.

Pollard, who currently lives with his wife Enesa in Camillus, is a sophomore at Syracuse University. He brought his “little brother” and the boy’s twin to meet the president on Thursday.

Pollard and Haynie already had a strong relationship before the SU administrator brought his name to Micron. The two men had met earlier at the SU veteran student lounge and Pollard reached out to him to continue fostering their relationship, Haynie said.

Haynie told Pollard he wanted to see his resume but didn’t mention what it was for. Before he knew it, Pollard had been contacted by Micron’s head recruiter in North America.

When Haynie and Pollard met in SU’s football game against North Carolina State, Pollard shared the good news that they offered him a paid intern position as an electrical engineer, Haynie said.

While in the Navy, Pollard’s work as an engineer on nuclear submarines gave him years of experience with the skills Micron says he needs in his new workforce.

Pollard also represents the type of candidate Micron has committed to hire for their massive effort. They plan to hire more than 1,500 military veterans by working with the D’Aniello Institute for SU Military Veterans and Families.

Pollard grew up in the Richmond Hill neighborhood of Queens. For much of his life he said he felt like a “little fish in a big pond”.

When he was in high school, Pollard said he actually dreamed of studying in the SU architecture program, but ended up studying accounting at CUNY City College.

He reached his first year but still couldn’t get rid of the feeling that he wanted to do something bigger with his life.

“I had no real work experience and nothing up to that point in my life had really set me apart from the 8.3 million other people residing in the city at the time,” Pollard said. “I wanted a change, I wanted to feel like I was doing something with my life and contributing positively to the world.”

His father suggested he join the navy, and Pollard never looked back.

Once enlisted, Pollard said he was encouraged to become a nuclear engineer after performing strongly on a standardized placement test.

He trained in South Carolina for two years, then moved to Upstate New York for his first stint as a marine engineer. He spent two years there before going to Virginia to work on submarines.

Pollard left the Navy in 2021. He considers his time in the military to be one of the best things that has happened in his life.

“I think it really changed the trajectory I was on,” Pollard said.

When he decided to return to school, Pollard was drawn to the League because of the programs in place for veterans.

He was incredibly grateful to have the opportunity to study again and said being a student gave him time to give back to the community he was now part of.

He achieved this in particular by becoming a big brother thanks to the Big Brothers Big Sisters program of PEACE Inc. in Syracuse.

Pollard said he had a very happy childhood and was extremely lucky to come from a family with two loving parents and an older sister.

“I realize now that a lot of kids aren’t as lucky as me,” Pollard said. “Many grow up in broken homes with no role model of what is possible for their lives. I want to be that role model.

Latasha Wilson, senior community mentor manager for the PEACE program, said Pollard was a much-needed addition to the program. Currently, there is a huge shortage of men applying to be big brothers and a long waiting list of kids looking for mentors.

Pollard became the “big brother” to a fourth-grader from Baldwinsville named Kenorie. Wilson said that in just four months of mentorship, Pollard was an outstanding role model and asked to take on Kenorie’s twin brother, Kenare, as his second “little brother”. Kenare has her own mentor, but as a student Pollard has more time, she said.

Wilson said it’s unusual for mentors to be approved to take on another mentee before they’ve been with the program for more than six months, but they can make an exception for Pollard.

There is also a dearth of people of color applying to be mentors for the PEACE program. Pollard works to recruit people and help find mentors for boys who were expecting one, Wilson said.

Although currently only mentoring one of the brothers, Pollard asked Wilson if he could get the two brothers to meet with the OCC president. She happily accepted.

The two brothers had the opportunity to take a selfie and talk to the president. Pollard said he didn’t even get a chance to take a photo with Biden, but he was so excited the boys got the chance.

Biden approached Pollard, shook his hand, and said he owed the boys ice cream for behaving so well.

Pollard and Wilson both stressed how important it is for black kids to see people like them succeed and be celebrated by the president.

Pollard said he sees his opportunity with Micron and his big brother role as hope.

As Micron builds his “megafab” in Clay, Pollard will spend his summers interning at his Virginia factories learning the ropes, but he sees his future in central New York.

He and his wife, who works for Chase, have just purchased a duplex in Eastwood and will be moving there in about a month, he said. His wife’s family is from Watertown but lives in the Syracuse area, which was another factor that drew them to Syracuse.

He said the house is a huge commitment for them and he is excited to start their life here.

“I think I’ll definitely be here long term,” Pollard said. “I am happy to be able to start early and to be able to work with them for the next two years and progress in the company while I am still in training at school.”

Biden en route to OCC in Syracuse, where attendees want to know what he will say about Micron

Micron jobs: The tech giant would need engineers – and an army of HVAC, assembly and machinery workers

Full coverage of the Micron project by Syracuse.com

Editor Anne Hayes covers breaking news, crime and public safety. Any advice, an idea for an article, a question or a comment? You can reach her at [email protected].