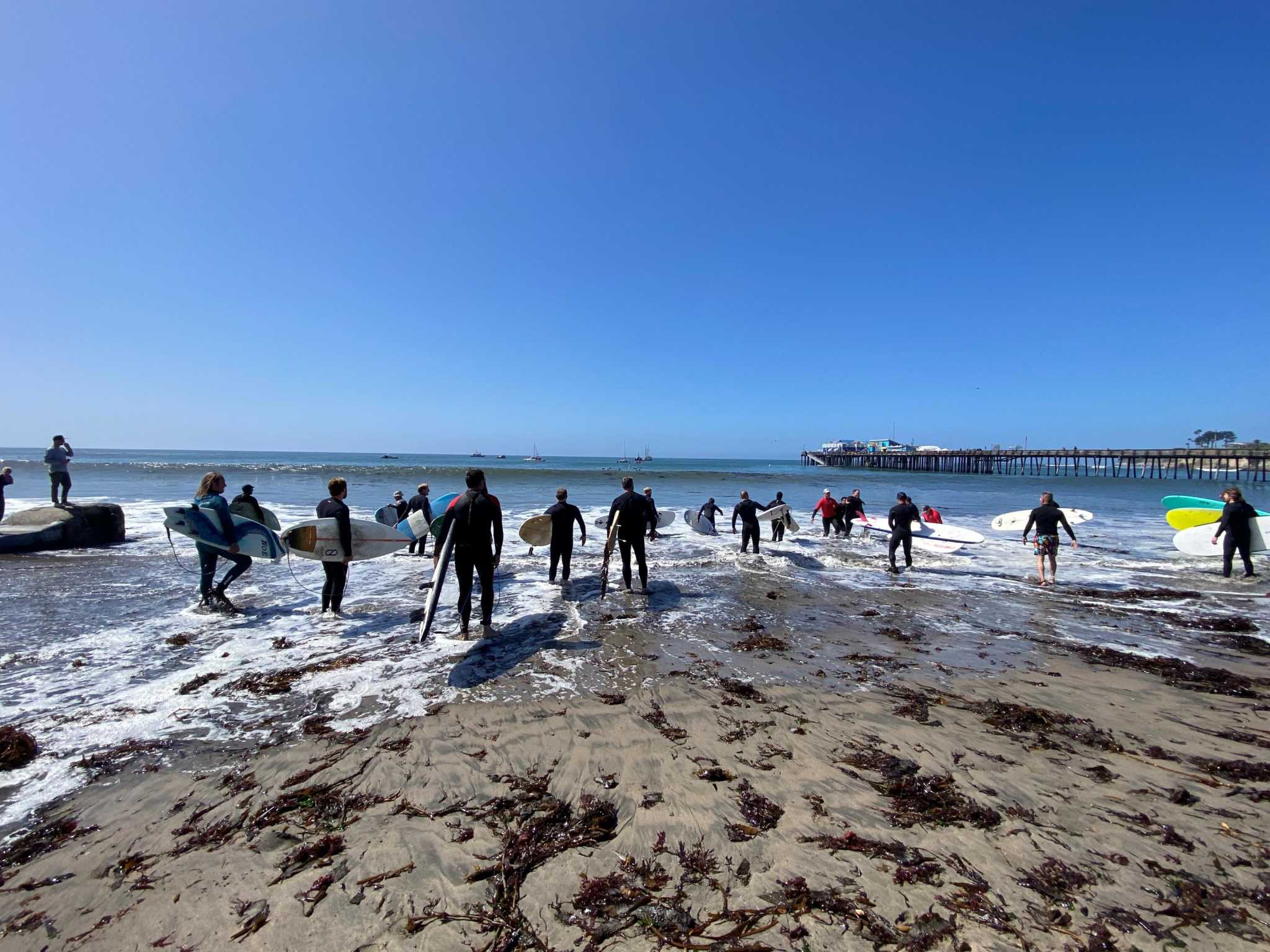 On a memorial day when somber ceremonies took place at Bay Area cemeteries and former military bases, a very different tribute unfolded at a coastal beach near Santa Cruz.

In the bright morning sun at Capitola, James Gmachowski and three dozen other members of the Veteran Surf Alliance zipped up their wetsuits and peered out at the freezing turquoise ocean. They hit the water just as a helicopter hovered overhead towing a gigantic American flag.

Monday marked the fourth time that Gmachowski, a 35-year-old who served a decade in the military, joined other veterans from the Bay Area, Central Coast and Central Valley for a surf of the Memorial Day. They remember friends who didn’t come home scattering flowers at sea.

It was one of many events held in and around the Bay Area to mark the annual holiday, from a wreath ceremony aboard an aircraft carrier in Alameda to a program at the Presidio in San Francisco and remarks at the cemetery in San Jose by former Secretary of Defense Leon Panette.

Gmachowski is no stranger to the toll of the war. Before paddling out on Monday, he read the names of 14 soldiers from his infantry division who were killed while deployed in Iraq from 2006 to 2007. He still remembers details like how one One of these friends always told other soldiers to “heal themselves,” taking care of their physical and mental health away from the trauma of the front lines.

A similar philosophy is at the heart of the Veteran Surf Alliance, a 150-member volunteer-run group founded by Santa Cruz Army veteran Sean Meyer in 2018 that uses surfing to ease the transition to civilian life. Members regularly host group surfs, barbecues and camping trips around the Central Coast and Bay Area.

Dan Redmon, a Marine Corps veteran who grew up surfing the East Coast and is now the Aptos-based alliance president, cites preliminary research that has shown a reduction in PTSD symptoms in veterans who experience a “state of flux” when in the water. . The stress of an unpredictable natural environment, he said, becomes a unifying experience for people all looking to build a new life outside of the military.

“A lot of veterans come out, and they have PTSD, they have stress, they have anxiety, they feel isolated,” Redmon said. “Other people can kind of guide you through navigating what to do in the world, how to find a job, how to live.”

On Monday, about 100 veterans, volunteers and their family members gathered at Capitola with brightly colored surfboards, American flag cowboy hats and all sorts of camouflage paraphernalia for the paddle-out and lunch hosted by the Veteran Surf Alliance. Before entering, local dance instructor and hula school owner Lorraine Kinnamon presented a wreath of yellow flowers to remember the dead and vibrant red roses to honor the veterans still there.

“The fact that they’re taking these youngsters out in the water,” Kinnamon said, “I can’t think of anything more healing.”

Healing took different forms in other parts of the region.

In the Presidio of San Francisco, where 26,000 graves had small flags placed on them by volunteers, speakers honoring veterans included House Speaker Nancy Pelosi and Sen. Alex Padilla. Across Alameda Bay, about 150 people gathered on the USS Hornet to hear from service members who served on the carrier in World War II.

“This is a pivotal moment in our history,” Panetta told about 200 people gathered at Oakhill Memorial Park, where hundreds of small flags lined the graves of veterans. “In many ways, everything we fought for and died for is at stake in this war: the freedom of people to decide how they will be governed.”

Among those gathered at Oakhill was former Navy foreman Adam Martinez, 44, who drove his 1960 Buick LeSabre to the ceremony. He and other members of the Rod & Wheelers Car Club of San Jose lined the street with their vintage pickups, hot rods and roadsters dating back to the 1920s.

Martinez grew up in a strong military family — his aunts and uncles served in World War II and his father in the Korean War — so Memorial Day has always had a special meaning. This year, he has also felt the brunt of recent tragedies closer to home: deadly mass shootings in Southern California, Buffalo and Uvalde, Texas.

“It’s important that people come together today in these times to remember those American citizens who were victims of violence, not just war,” Martinez said. “It seems like we have our own personal war on gun violence.”

Back on Capitola Beach, while long-weekend tourists rolled around in their coolers and kicked off beach volleyball matches, Gmachowski returned to shore to change boards.

Being in the water helps him focus on new priorities, like his four kids and a career change to pursue psychology work with veterans — and to make the most of the time others he has. knew weren’t lucky enough to get.

“They wouldn’t want us moping around,” Gmachowski said. “We are here for a reason.”