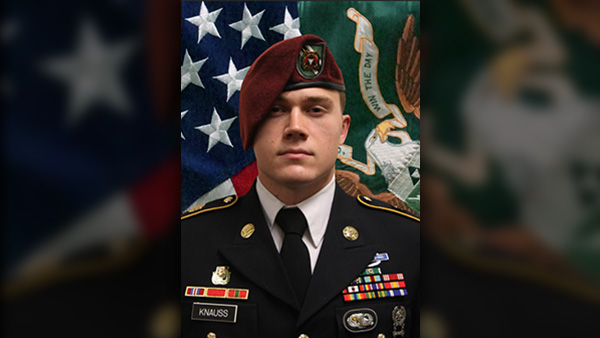 KNOXVILLE, Tenn. (WATE) — A memorial service and plaque dedication will be held next month in honor of Army Staff Sgt. Ryan Knauss, from eastern Tennessee, was one of 13 US servicemen killed by a suicide bomber in Afghanistan during the withdrawal of US forces last year.

The memorial will take place on Saturday April 9, two days after what would have been his 24th birthday. It will begin at 10 a.m. with a veteran-led procession beginning at the Foreign Wars Veterans Center at 734 N 4th Avenue and ending at Weigel’s location in Corryton next to a memorial site created in his honor. ‘last year.

The community of Gibbs is building a memorial for Staff Sgt. Ryan Knauss, 12 other fallen soldiers

There, the memorial service will host Gibbs High School’s ROTC honoring Ryan Knauss with a flag-raising ceremony. A memorial plaque will be dedicated to Ryan and will be placed permanently in the Weigel Memorial Garden.

“It’s such a meaningful way to honor our son and the twelve other selfless young soldiers who lost their lives serving our wonderful country,” said Paula Knauss Selph, Ryan’s mother. “Having the opportunity to celebrate him and this great community he loved with so many of his friends, family and other veterans provides a tremendous outlet of love and support for all who cared. him. We feel immensely blessed to have Ryan honored in this way.”

The memorial dedication is scheduled to end at 1 p.m. and will be followed by an anniversary celebration at Corryton Weigel’s, located at 740 Tazewell Pike.

The weekend will conclude with a community hike at House Mountain at 2 p.m. on Sunday, April 10.

“It’s because of young soldiers like Ryan who gave their lives in service to our great country that we can live in the land of the free,” said Bill Weigel, president of Weigel’s. “It is with deep gratitude that we honor him with this permanent plaque, signifying his sacrifice. It is a small gesture for us in a much bigger picture to honor those who sacrificed themselves so selflessly for all of us.

In the event of rain, Saturday’s memorial will move to the Clear Springs Baptist Church at 7350 Tazewell Pike.