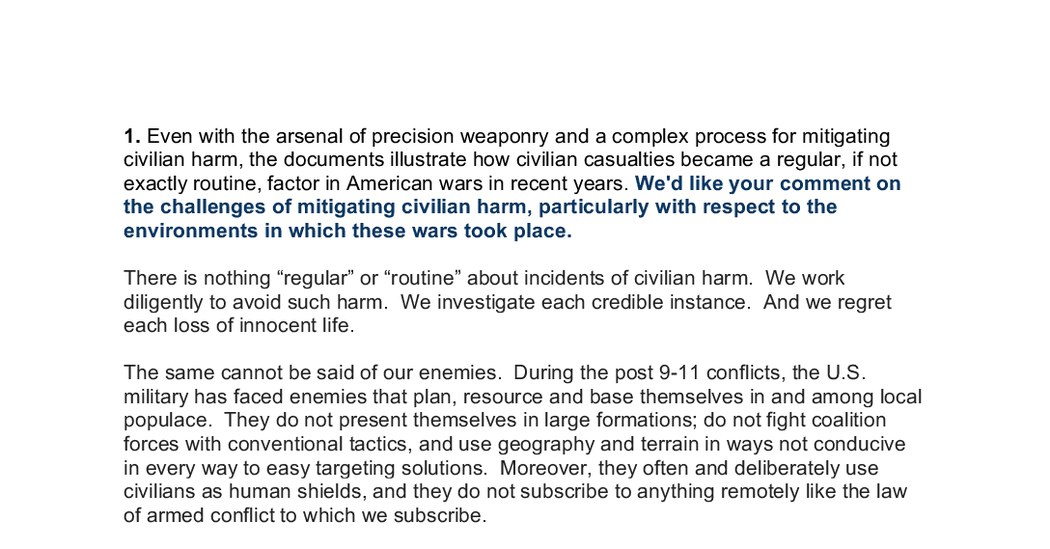 Military answers to questions about US airstrikes

1. Even with the arsenal of precision weapons and a complex civilian damage mitigation process, the documents illustrate how civilian casualties have become a regular, if not routine, factor in American wars in recent years. We would love to hear from you on the challenges of civilian damage mitigation, particularly with regard to the environments in which these wars took place. There is nothing “regular” or “routine” about incidents of civilian damage. We are working diligently to avoid such damage. We investigate every credible instance. And we regret every loss of innocent life. The same cannot be said of our enemies. In the conflicts that followed September 11, the US military faced enemies who plan, procure, and base themselves in and among the local population. They do not appear in large formations; do not fight coalition forces with conventional tactics and use geography and terrain in a way that is not at all conducive to easy targeting solutions. Moreover, they often and deliberately use civilians as human shields, and they do not subscribe to anything comparable to the law of armed conflict to which we subscribe. Indeed, the potential for accidental civilian damage to fuel the ideological hatred embraced by our enemies in post 9-11 conflicts and stimulate the recruitment of the next generation of violent extremists, has made the risk of harm minimized. civilians a strategic necessity because as well as a legal and moral imperative. 2. At the same time, the documents identify patterns, such as a recurring failure to detect the presence of civilians during the targeting process. They also reveal a lack of accountability for findings of wrongdoing or disciplinary action, few full investigations, few lessons learned or recommendations, and little effort to consider those findings as a whole. What is supposed to be a system of accountability seems rather to be a system of impunity. We would love your comment. We would dispute the assertion in the question that there is a “system of impunity”. The U.S. military continues to strive to reduce the risk of civilian damage during combat operations in a manner that exceeds the standards imposed by the law of armed conflict, both in terms of the strikes we have conducted and strikes that we have chosen not to undertake. . However, when strikes cause damage to civilians, the legality of a military strike is judged on the basis of information reasonably available to the strike forces at the time of the decision to strike. The United States Central Command maintains a policy of reviewing and evaluating all reports of civilian damage, regardless of their source, and when available information warrants, conducting formal investigations, applying essential lessons drawn and recognizing