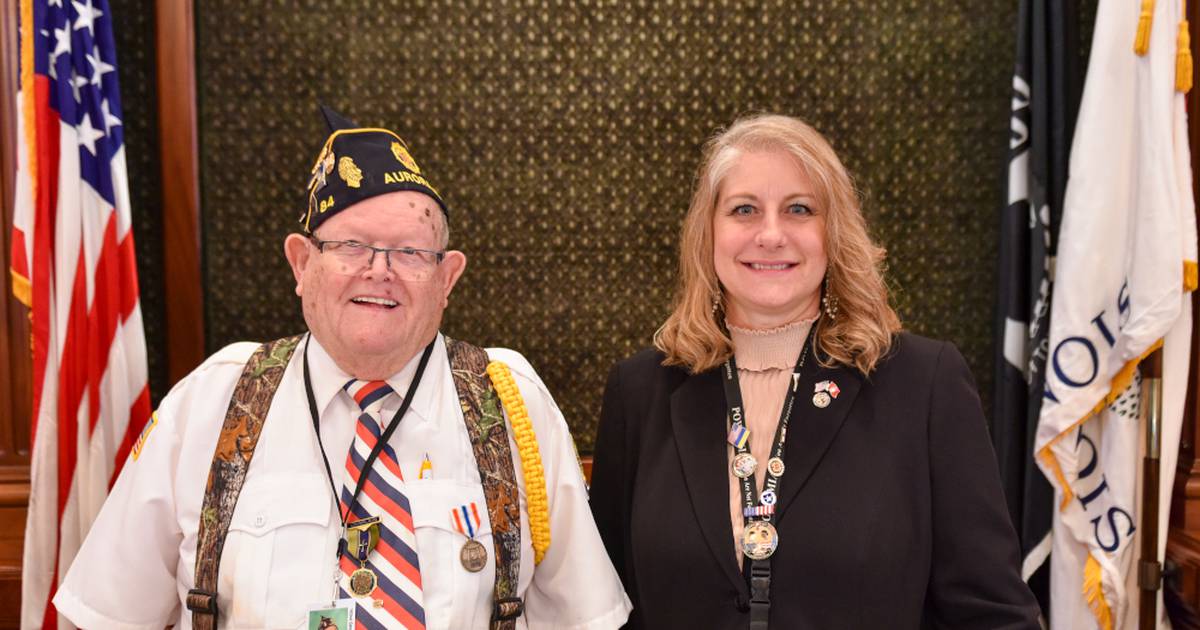 State Representative Stephanie Kifowit, D-Oswego, Chair of Veterans Affairs and a USMC veteran, had the honor of hosting Willard Fruits, a Korean War veteran and current resident of Newark, formerly of Montgomery, to deliver the invocation at the start of official business during the last week of the spring session of the Illinois House of Representatives in Springfield.

Fruits received a round of applause from members of the Chamber. Following his invocation, 90-year-old Fruits was asked to stay and be honored as the House held its annual memorial ceremony to honor those who have given so much.

“I lost many good friends in Korea and I will never forget them,” Fruits recalled before offering George Washington’s prayer as an invocation before the body.

“It was an honor to have Mr. Fruits, a person I’m proud to call a dear friend, to address the Illinois House of Representatives invocation,” Kifowit said in a press release. “We honored the service members who died that day, and Willard was on the front line and saw a lot of sacrifice, and we honored him that day as well,” Kifowit said. “Willard is a local and national treasure for his service in the Korean War. His thoughtful words, his recounting of his Korean War experience, his genuine appreciation for Illinois, and his infectious positivity showed members of the IL House of Representatives true patriotism.

US Army Sergeant Fruits was a demolitions expert and served on the USS Massey, a destroyer used for blockade and bombardment. It also saw heavy fighting just south of the 38th parallel on the Korean mainland. As for its service life, “14 months, 21 days and 22 minutes,” Fruits said. When his captain asked him how soon he might be ready to go home, he added: “2 seconds!

Major General Neely and Brigadier General Boyd of the Illinois National Guard were on hand to thank Fruits for his service before the annual memorial ceremony.

Kifowit invited Fruits to accompany him when the official copy of Joint Senate Resolution 34 was presented to Illinois Senator Tammy Duckworth (D-Illinois) and U.S. Congressman Bill Foster (D-Illinois) in hope to pass legislation in the US Congress this calendar year. .