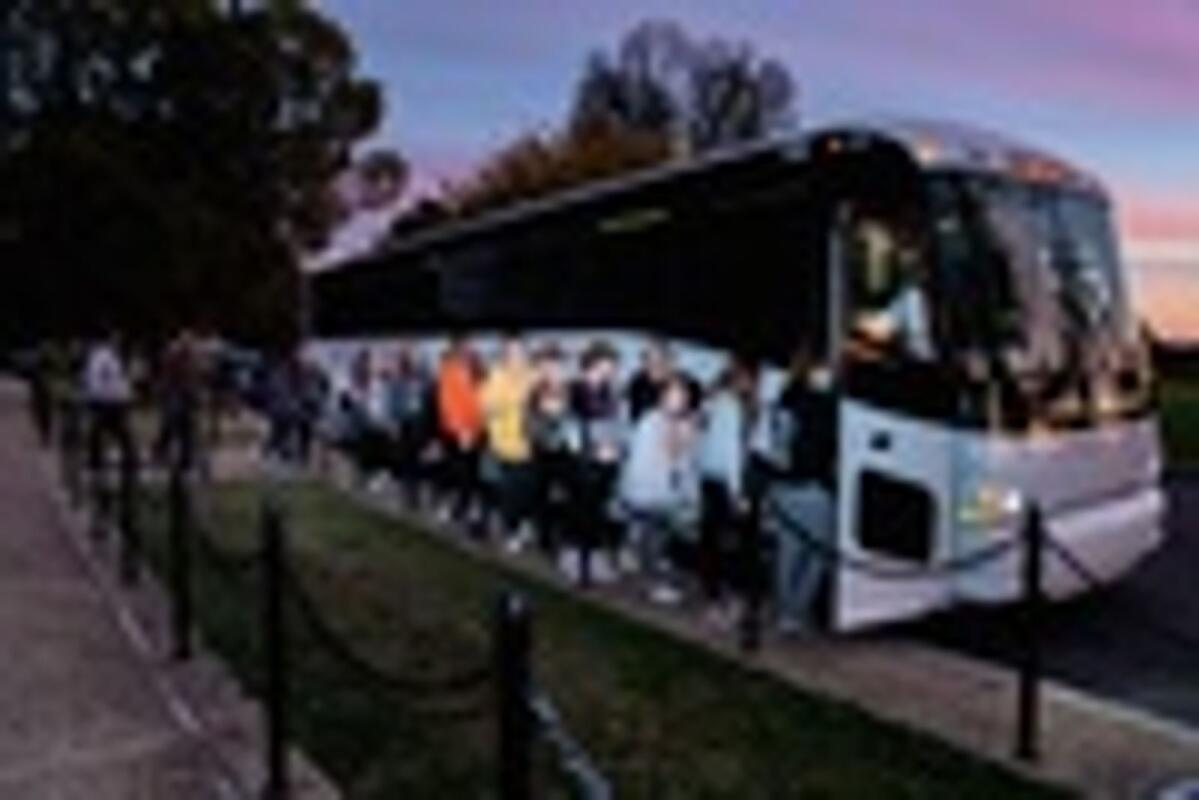 After a long day of traveling in Washington, DC, the ninth graders from Iowa return to a bus. (Shuran Huang / Washington Post)

On a cold November morning in Washington, DC, a group of Knoxville ninth grade students gathered on a shady path near the Vietnam Veterans Memorial to listen to Sandy Brooks, their EF Educational Tours guide.

The 37-degree forecast didn’t deter a handful of Iowa boys from wearing shorts. About 50 yards behind the guide, a group of similar-looking students wearing matching white shirts climbed the steps of the Lincoln Memorial.

“Everyone has to be having fun because it’s a working sidewalk,” said Brooks, bringing together the restless teens and the chaperones watching them from behind. A Southwest Airlines jet thundered overhead, nearly drowning out the guide’s request. She told the kids to get used to it. “It’s a flight path for Reagan National Airport,” she said, standing on a park bench so everyone can see and hear better. Moments later another jet roared.

Tourism is gradually returning to DC, a destination for visitors to discover the city’s history, architecture and network of free museums. The sight of Godzilla hoodies and neon cords on the National Mall spoke of another comeback: the return of the school trip to Washington.

As vaccination rates rise and coronavirus cases decline, life in Washington has started to look more like it was before the pandemic. This includes groups of middle school students wandering around the reopened museums and monuments, a welcome return for a local tourism industry devastated by the lack of visitors.

According to a study shared by Destination DC, visitor spending between March 2020 and March fell by $ 6.1 billion and the city lost $ 477 million in tax revenue. In 2020, DC lost around $ 370 million on canceled conferences alone.

For decades, countless students, teachers, and parents have come to DC from across the country to learn more about their nation’s beginnings. The pandemic removed this opportunity, but interest in the rite of passage has not waned. EF Educational Tours reports having recorded a record travel demand in 2023.

The approximately 40 Iowa students of the EF Tour Group from Brooks were originally scheduled to visit DC the year before, when they were in eighth grade. “COVID has hit my seventh year,” student Madi Day-Suhr said. “We weren’t sure what was going to happen. We kept procrastinating.”

Their journey began with an approximate calling time for flights from Iowa to Baltimore.

“I woke up at around 4:25 am because we had to be at the airport at 5:30 am and I still had some things to go,” Maasdam said. “I know some people get up early to play sports, but all of my workouts are after school, so I never really did that… It was definitely a slap in the face.”

Some people saw their flights delayed, while others made it to DC without any real drama. Brooks adjusted his route accordingly.

Improvisation is part of a seasoned tour guide’s job description, but the pandemic has added new hurdles. Brooks, who started guiding groups again in June, said the biggest problem was finding dining options to accommodate large groups when so many restaurants are closing earlier than before.

Brooks said she was also missing out on some touring opportunities that were still not being considered. The US Holocaust Memorial Museum does not accept large groups due to coronavirus concerns, and tours of the Capitol have been halted since the pro-Trump riot on January 6.

Students always find ways to have a good time at DC Maasdam, for example, enjoying two orders of fries and a Sugar Plum Fairy milkshake at Shake Shack, which “probably isn’t the best decision given that I am lactose intolerant, ”she said. noted.

“It’s really fun, it doesn’t really look like school,” said student Ezra Schmidt. “The only thing that looks like school is that you do it with your friends, which is a good thing.”

Like many visitors, Schmidt and his classmates were surprised at the size of the monuments in person compared to what they have in photos and films. “And you can see the symbolism in the details a lot better when you’re there in person,” he said.

Or as student Kyl Bauer summed it up, DC turned out to be “epic,” he said. “I was talking about how all of these memorials make it look like they’re made for giants, which I mean in theory I guess they are. The statues inside are big.”

At the Vietnam Veterans Memorial, some students observed the names of war victims. Some searched for family members and acquaintances they knew were set in black granite.

“Much of the affair is fun, but I think (the Vietnam Memorial) was probably the best time so far,” Day-Suhr said. “It gave us a lot of mixed emotions, like my heart was heavy.”

A group of grade nine students from Iowa pose for a portrait on November 5 in front of the Martin Luther King Jr. Memorial in Washington, DC (Shuran Huang / Washington Post)

Then it’s off to the Martin Luther King Jr. Memorial and around the Tidal Basin to the Franklin D. Roosevelt Memorial. After the teens rubbed the ears of Roosevelt Fala’s bronze dog sculpture for good luck, they walked to the Jefferson Memorial. They had managed to secure hard-to-obtain tickets to the National Museum of African American History and Culture and had no time to waste.

“The African American museum here – it’s phenomenal, so we’re not going to go through that next section, but we’re not going to indulge ourselves either,” Brooks told the group. “Remember we had the silly conversation last night?”

On the bus, the tour continued with teenage shenanigans.

“Elliott, your 17 girlfriends are calling you from the back of the bus,” one student said.

Shenanigans, of course, are part of a school trip package. Serious educational moments aside in memorials and inside museums, a school trip to Washington is memorable for the lightest parts, like the fun of staying in a hotel with your friends.

The in-person adventure was a welcome nod to the mostly virtual slump of the previous year.

“(The virtual school) was definitely depressing in its own way because… it made us all inactive, we pretty much wallowed in our own rooms,” Vinsick said. “Nobody did any homework, I hate to admit it. But doing it with Zoom is quite difficult.”