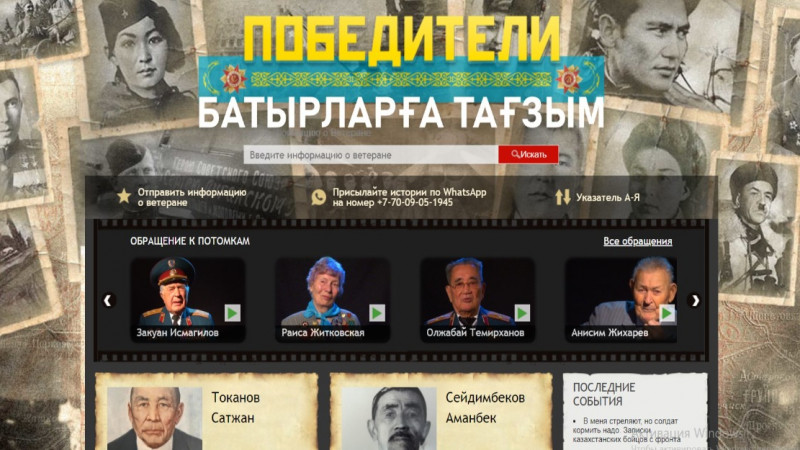 NUR-SULTAN – An online event dedicated to the memory of Kazakhstan’s World War II veterans and Victory Day will be held on May 9 on the agency’s website Tengrinews.kz, the press service reported of the akimat of Nur-Sultan (municipal administration).

The official platform, where people can share stories of their grandparents, who participated in World War II. Photo credit: Tengrinews.kz

Veterans’ stories and their exploits will be discussed by the soldiers’ friends and families. Since the project was launched in 2014, more than 3,500 stories about Great Patriotic War veterans and home front workers have been published to date.

The action is one of many events held across the country to honor not only fallen heroes, but also those who are still living and to share their stories of the hardships of war.

To date, 381 veterans and 97,758 people who contributed to the victory of the Great Patriotic War (as the Second World War was called in the former Soviet Union) live in Kazakhstan, the deputy labor minister said and Social Protection of the Population of Kazakhstan. Ruslan Sakeyev during a May 5 briefing at the Central Communications Service.

“Ninety-two residents of besieged Leningrad, 212 former minor prisoners of concentration camps, 3,221 wives (husbands) of deceased disabled veterans, six widows of those killed during the war, 74,116 front workers and 20,111 other people assimilated to participants in the war and people disabled because of the war are among them,” Sakeyev continued.

Overall, one in two Kazakhs took part in the war. Hundreds of thousands of Kazakhs received medals and orders for military service, while nearly 500 people were honored as Heroes of the Soviet Union. Four Kazakhs became heroes twice, and 110 Kazakhs received the Order of Glory in all three classes.

On May 6, President Kassym Jomart-Tokayev awarded the title of Hero of the People of Kazakhstan to three Kazakh soldiers posthumously. They were sniper Tulegali Abdybekov, rifle battalion commander Alexander Nesmiyanov and sniper Ibrahim Suleimenov.

In addition to rewarding these Kazakh soldiers, the government provides them with monthly social payments. The average amount of social benefits, including pensions, is 194,000 tenge ($400) for war participants, 202,000 tenge ($460) for people disabled as a result of the war, and 132,000 tenge ($302) for local workers.

In addition, local executive bodies should provide one-time financial support in the amount of 5.4 billion tenge ($12 million) to war participants.

“All participants in the war and people with disabilities as a result of the war will receive at least one million tenge ($2,000) in all regions and two million tenge ($4,500) in the Aktobe region. Former minor prisoners of concentration camps will receive no less than 100,000 tenge ($230), residents of besieged Leningrad and widows of soldiers who died during the war – no less than 60,000 tenge ($137),” Sakeyev added. .

This year, a military parade dedicated to the 77th anniversary of victory in World War II and the 30th anniversary of the Kazakh Armed Forces, which was marked by several eventswill not take place due to the unstable epidemiological situation, the Kazakh Defense Ministry reported.

Various festivities ranging from concerts to special performances in theaters will take place in all regions.

The traditional Zhauzhurek Polk (Brave Regiment or Immortal Regiment), a procession of civilians holding portraits of their grandparents and great-grandparents before the pandemic began, will be streamed online this year. Under the new format, people can share information about their relatives who participated in the war on the campaign information platform.

On May 5, representatives of the Consulate General of Kazakhstan in St. Petersburg laid flowers at the monument to Hero of the Soviet Union Aliya Moldagulova, which was installed in 2019.

According to the article published on the Polisia.kz news media website on May 6, the memorial complex of the Kazakh Interior Ministry dedicated to Victory Day and to the memory of employees of internal affairs agencies who recently demonstrated exceptional heroism in defending their homeland open in the capital.

“This memorial is dedicated to the exploits of our veterans, who served for the good of our country and were examples of bravery and honor,” Kazakhstan’s Interior Minister Marat Akhmetzhanov said at the ceremony. opening.

Earlier in March, Uralsk International Airport was renamed after Manshuk Mametovagunner and Hero of the Soviet Union, while an exhibition dedicated to the 100th anniversary of another war heroine Khiuaz Dospanova opened in May.