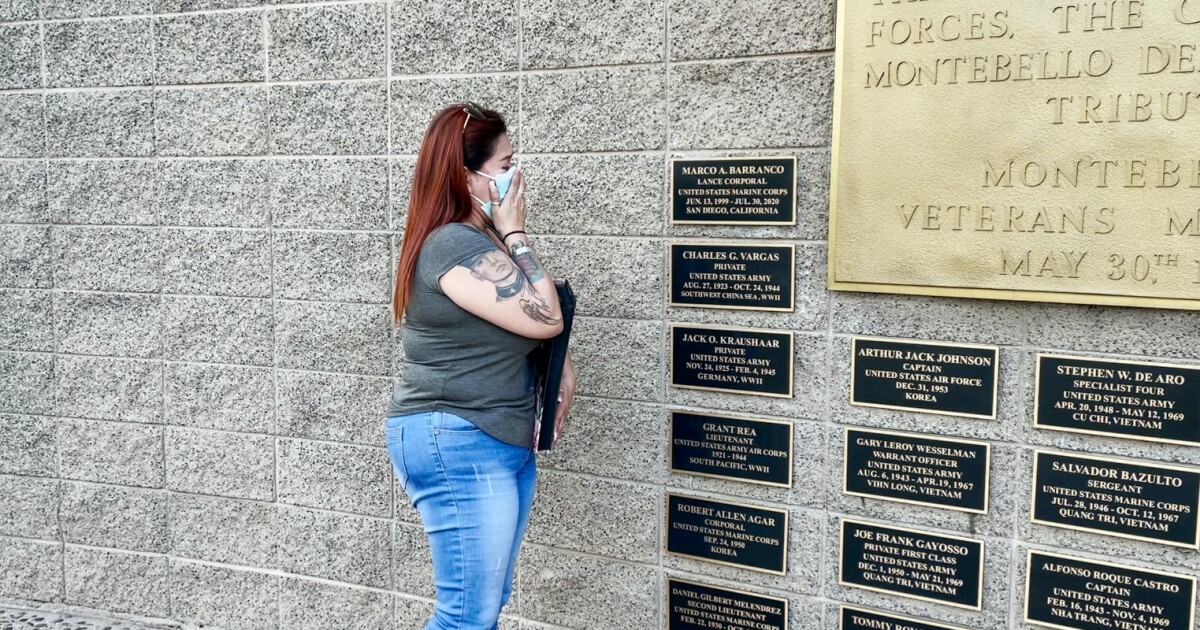 Parents of eight Marines and a sailor who drowned off the coast of California in 2020 say they are exhausted by a system that is slow to change.

After multiple reports, congressional testimony and a series of hearings at Camp Pendleton to determine whether leadership will remain in the Marines, Lupita Garcia said she doesn’t feel closer to justice.

It’s been over 18 months since Garcia’s son was killed in a practice accident. Barranco, 21, drowned along with eight other soldiers when their vehicle sank off the coast of Southern California in July 2020.

“I always thought the military was very organized,” Garcia said. “They know what they are doing. And so I feel a little guilty because I didn’t think about it more. Maybe if I had known there were all these flaws, all these accidents, I might have told my son about it.

Garcia wanted to meet at a park in Montebello, just east of Los Angeles.

This is where Barranco trained when he was still in high school. The young man trained with a group of Marines who helped him prepare to enlist. His name has since been added to a local veterans memorial across the park.

“I believe in God. I have Faith. Sometimes I think that’s exactly what God wanted, whatever,” Garcia said. “But I never accepted that in training. That’s what makes me really, really angry Why in training?

Garcia is among a group of parents who sat in the audience during a series of hearings at Camp Pendleton that began in January. At least six officers and enlisted leaders face hearings to determine whether any of the leaders involved that day will be expelled from the Corps.

“It doesn’t stop,” Garcia said. “Our wounds are still open and they are putting salt in them. To hear it all. But yeah, I didn’t feel anything like ‘oh, okay, I feel better now.’ Absolutely not.”

On July 30, 2020, eight Marines and one Sailor drowned while returning to USS Somerset from San Clemente Island in an Amphibious Assault Vehicle, AAV. Armored personnel carriers become boats in water. Some of the aging vehicles broke down. Their unit was so behind schedule that by the time they entered the water, their ship had pulled away for another exercise.

Three of the AAVs had to be left on the beach, due to mechanical problems. Another AAV broke down in the water and was towed to shore. Battalion Commander Lt. Col. Michael Regner was aboard one of the ships off the coast.

Regner testified during his hearing that in the confusion he did not realize another AAV was sinking, and 45 minutes later the runway with Garcia’s son sank, with troops fighting to get out.

“I don’t feel like we’re getting justice,” said Aleta Bath, the mother of Pfc, 19. Evan Barth from Wisconsin. “All I hear on these signs is that they’re going around pointing numbers at each other.”

Barth participated in nearly every Camp Pendelton hearing related to the crash.

At least three officers responsible that day were allowed to remain in the Corps. Each officer said they informed their command of the issues leading up to the exercise, but none of them stopped the exercise.

“They’re supposed to be Marines but no one took responsibility and no one is being held accountable,” Bath said. “So, me sitting in this chair. If nothing else, they must be looking at me.

The Marines and Navy produced several reports indicating serious shortcomings in training and equipment failures leading up to the exercise. The vehicles were removed from the so-called delay lot, which meant they were not in working order when handed over to the Battalion Landing Team, 1st Battalion, 4th Marine Regiment, 15th Marine Expeditionary Unit.

In May, Deputy Commander Gen. Gary Thomas told a House Armed Services subcommittee that the Marines were trying to address serious issues with their security culture.

“Honestly, I was worried they would sink, and that seemed to be the prevailing sentiment,” said Congressman Seth Moulton of Massachusetts, who sits on the committee.

Moulton is also a former Navy officer, who rode an AAV in combat.

His unit thought it would be safer to ride on the vehicle, as their vehicle crossed a river leading into Baghdad during the initial invasion.

“It comes down to culture,” Mouton said. “If I had that concern as a young second lieutenant 20 years ago, then you know why the Marine Corps hasn’t responded satisfactorily to that since then.”

Despite the problems highlighted in published reports by the Marines and Navy, it took nearly 18 months after the accident for the Marines to finally retire the aging AAVs from sea service.

Yet the Marines left open the possibility of using them in an emergency, potentially requiring Marines to operate them without training.

The Marines are rethinking the future, ditching tanks and other equipment and Moulton said they need to rethink that decision.

“If the Marine Corps decided in December that they would only use these vehicles in a crisis, I think we should ask ourselves what the likelihood is that these particular types of crises will actually occur,” Moulton said. .

The more difficult question is whether Marines can create a culture where officers are empowered to stop when they see a security concern, according to Moulton.

Their son was one of the soldiers allowed to take part in the exercise despite failing to pass his mandatory swim test.

Equipment used to train Marines on how to exit a sinking vehicle was broken in the run-up to the exercise. The Marines replaced a training device called the dunk chair, which does not require Marines to fight their way out of a submerged vehicle.

“The boys are in the dark,” said Peter Vienna. “A few of them swiped their cell phones, which they weren’t supposed to, but they’re using their cell phones for light. Try to try to see and it wouldn’t have mattered anyway, as they never had any evacuation training.

Hearings have been taking place since January at Camp Pendleton. This is the last opportunity for families to receive some sort of closure. So far, the process has not been what parents thought it would be.

It was an isolating experience for many parents, even after sitting in the audience.

Because their sons were killed in a training exercise in the United States, they technically aren’t even Gold Star families. Congress reserves this title for the families of those killed in action.

“I would rather he died in battle because I would have been prepared for that,” Nancy Vienna said. “I would accept him so much more, because it was his job and he is going to fight. Like that, people ask me why it’s been almost two years, why are you still grieving? I’m like because I can’t accept this, I can’t have an open casket. I don’t get justice, I never saw him, I couldn’t say “I love you” to him.