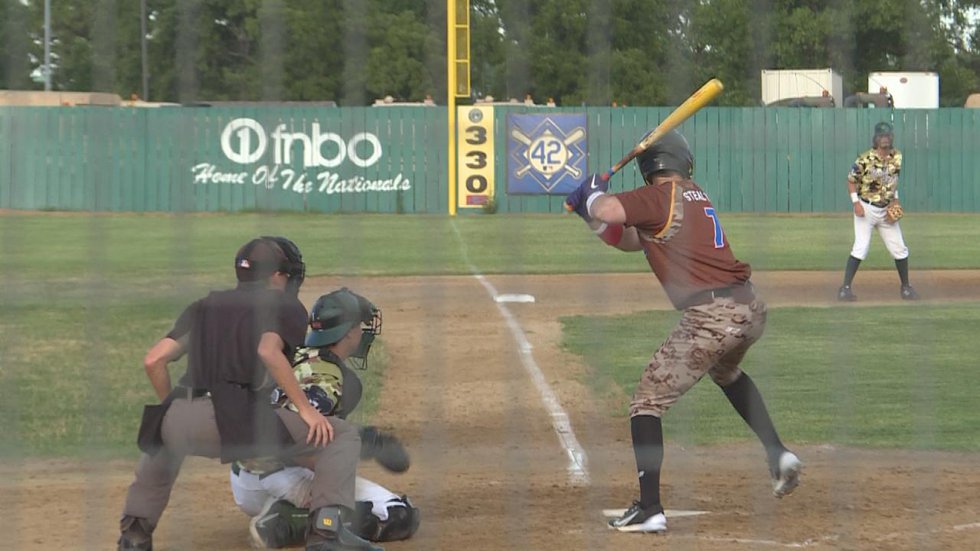 NORTH PLATTE, Neb. (KNOP) – The North Platte Plainsmen are hosting the U.S. Military All-Star Team in town for a game on the baseball field and to honor American heroes. Plainsmen owner and operator Chuck Heeman explains that the game isn’t just a game, it’s raising awareness for an even greater cause.

“Well, one of the main fundraisers we have tonight is for this Disabled American Veterans, the local chapter. Anyone who has been hit by a military member, or lost one, or had one injured, knows what a great cause that is. So it’s about awareness for the disabled American veteran and his awareness for these guys who play for the stars, they’re all active military. So a realization that all of these guys are all trying to help a cause together. You know, we had different causes in different legs of this tour, but with the DAV, we all work with them,” Heeman explains.

Prior to the start of the game, both teams took to the field to honor the local North Platte veterans.

Early in the game, the Plainsmen were going to get things going late in the first. Brock Hendrix comes on board with a single base at second. Then Carlton Perkins gets hit with a pitch to put two on the Plainsmen’s bases. With two out, Lucas Johnson gets up at bat and hits one to left field while driving in two runs. The Plainsmen would finish the first inning with a two-run lead.

The US Army All-Star Team would turn the bats on in the top of the third inning. To start the round, there would be two consecutive marches to put two for the US military stars. Then, to load the bases for the All-Stars, Cole Weaver hits a single substitute to the pitcher, but there would be a home plate on that play. Then Bryce Weidman would step in with the bases loaded. Weidman would deliver and his hit would score two runs to make it a two-run game. The

In the end, the Plainsmen would get the win over the US Military All-Star 7-5.