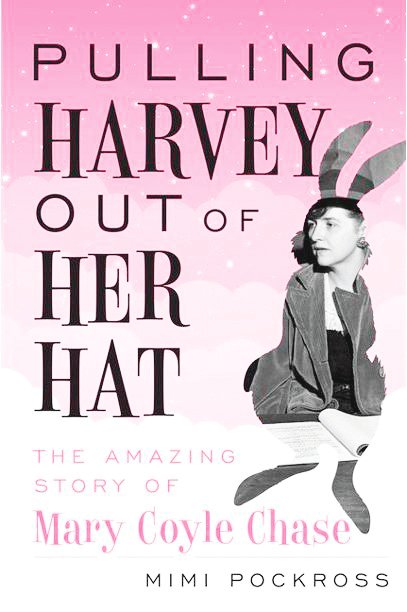 “I’m a former drama and drama teacher,” said Colorado author Mimi Pockross, who recently published a charming book on theater legend Mary Coyle Chase of Denver, including the Pulitzer Prize-winning play, “Harvey” made its Broadway debut in 1944, ran until 1949, and has been produced across the country and around the world since by professional theaters, high school theaters, and many community theater companies.

Pockross said that during the writing process of “Pulling Harvey Out of Her Hat: The Amazing Story of Mary Coyle Chase,” she researched Chase’s children and spoke with her recently deceased son Jerry, the younger brother. – and his wife.

Her parents were Irish immigrants who brought with them a storytelling tradition to the bustling western city of Denver, where a mixed population ranged from Mrs. Crawford Hill’s “holy 36” to middle-class people and rowdy miners and the like. whole world. (Pockross skillfully puts a mini-history of Denver and the nation between the lines here.)

Young Mary soaked up pooka stories, as her uncles and parents swapped stories after family dinners. Elwood P. Dowd’s 6 foot tall bunny friend is considered a pooka. Mary is described as a bright and restless child who graduated from West High in three years.

One spring day in 1918, she skipped school and headed for the theater district, Curtis and California Streets, where she was drawn to a sign in Denham: “The Wilkes Players Company presents the ‘Macbeth’. by Shakespeare. been “Hamlet” or another play at the Orpheum or Broadway – accounts are mixed, says the author. (Over 66 theaters existed in Denver at the time. By 1929, the few that remained became theaters.)

With the first scene, Mary got hooked … She found a copy of William Archer’s “Playmaking: A Manual of Craftsmanship” (1911) in the library, which dealt with crafts and practicalities and advised the reader to trust your own instincts. .

She enrolled at the University of Denver to study the classics, then became a reporter for “Rocky Mountain News” at a time when a few women were beginning to “find their way into journalism,” writes Pockross. She then returned to the University of the University of Colorado, Boulder, where she was not invited to join a sorority …

Social commentary entered her work – a first play was “Chi House”, which became “Sorority House”, finally a movie in 1939. Disenchanted with higher education, she left Boulder and was eventually hired by the Rocky Mountain News as a $ 15 per week corporate columnist. She dressed like a flapper in black, with pearls, and covered stories ranging from worldly events to shootings …

She met and married journalist Robert Chase, a strong, stable and supportive man who eventually rose to the rank of associate editor during a 47-year career with Rocky Mountain News. (Marie was fired after a prank.)

The couple had three sons between 1932 and 1936, living in rented houses, and money was tight. Bob gradually got up to the newspaper and Mary freelance wrote and charmed her boys with wonderful bedtime stories. Bob worked nights and she went to a typewriter on the dining room table to develop her ideas. A novel was rejected and she put together a little box scene and used reels as characters as she began to develop “Me Third,” a play about a social climber.

The Great Depression hit the country and theaters closed as they did today. The Federal Theater Project developed under the New Deal. In Denver, the University Civic Theater was formed on the campus of the University of Denver. Popular Broadway touring companies, Pockross says, have appeared in Central City in the summer and at the Elitch Stock Theater.

Mary Chase met Andy Slane, local director of the Federal Theater Project, who became her advocate and produced her “Me Third”. Mary played a role and decided to aim for Broadway, where rich coloradan Antoinette Perry lived and funded friend / producer Brock Pemberton. (The Tony Awards were nominated posthumously for her.) Chase sent her script “Me Third” to Pemberton, who invited her to come to New York and rewrite it five weeks after the birth of her third son. Chase’s husband looked after the children, sold their cars, and took out a loan to raise money for train tickets and living expenses in New York City. The title was changed to “Now You Did It” and it lasted 43 days …

Pemberton encouraged Chase to continue writing as she mournfully returned to Denver.

The next essay was with “Sorority House”, inspired by his unfortunate experience. It was made into a movie in 1939.

World War II began and Mary, affected by a sad time like the one we are living now, began to think about pookas and finished a lighter manuscript after two years. She had a nightmare about a psychiatrist being chased by a big white rabbit, which got her started.

A perfectly constructed “The White Rabbit” interested Pemberton, who raised funds to produce it and sought an actor for the lead role of Elwood P. Dowd, responding to a friend’s suggestion to hire the actor. Frank Fay, a reformed alcoholic, with a bit of Irish law. Fay was interested and Josephine Hull was perfect as Elwood’s sister, Veta.

This time, Mary had a cash advance to travel to New York, the rewrites were completed, the name was changed to “Harvey”, at Fay’s suggestion and after a trial run in Boston, “Harvey” opened its doors. doors at 48th Street Theater on November 1. 1944. The audience was delighted – and the rest is history.

He first played for four and a half years and Mary Chase became a millionaire. In May 1945, “Harvey” won the Pulitzer Prize for theater “because of the richness of its content and the new imaginative field it has entered; as well as in the plot and character that marked a departure from the usual Broadway play. (Other candidates: “Dark of the Moon”, “The Hasty Heart” and “The Glass Menagerie.”)

Mimi Pockross’ “Pulling Harvey Out of Her Hat” offers interesting ideas on what it takes to create a play, as well as a slice of local history – a perfect fare for a reader looking for fun and entertainment. for ideas on a winter night – or anytime. Posted by Rowman & Littlefield.