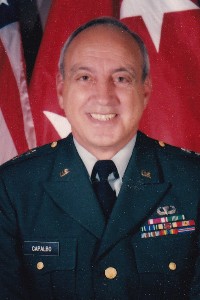 He was the husband of Shirley P. (Toledo) Capalbo. They had been married for 45 years.

Born in Westerly, son of the late Joseph and Christina (Terranova) Capalbo. He had lived in Smithfield for 44 years.

He was a graduate of Westerly High School and the University of Rhode Island. In 1960, he obtained a Bachelor of Science in Business Administration. He is also a graduate of the United States Command and Staff Colleges. His military career began at URI in the ROTC program where he was appointed an infantry second lieutenant and he retired from the US military in 1994 after more than 34 years of service.

Throughout his thirty-four year career, Major-General Capalbo was known for his training innovation and high standards. Immediately after his three-year active duty assignment at Fort Benning, Ga., He entered the Army Active Reserve. For thirty-one years, Major General Capalbo served in the most demanding military assignments while developing a hugely successful civilian career as Regional Director of Special Investigations for Allstate Insurance Company and Regional Director of Claims for the Fireman’s Fund insurance company.

After his retirement from the military in 1994, Major General Capalbo remained active in many organizations that support soldiers, their families and veterans. He was a member of the Military Order of Foreign Wars and was president of the Rhode Island Reserve Officer Association. He has been actively involved in developing a rehabilitation program for Rhode Island veterans with post-traumatic stress disorder, which involves the use of the Button Hole golf course for physical and mental rehabilitation. He was an active member of the URI Army ROTC Alumni Association section and was inducted into the URI ROTC Hall of Fame. He was also an early member of the Smithfield Veterans Memorial Committee.

Besides his wife, he leaves his son Jason Capalbo and his wife Donna of Smithfield, as well as his grandchildren, Nicholas and Valerie Capalbo. He leaves behind his siblings, Mary Stellitano of Westerly, Elizabeth Gervasini of Bradford, Nancy Mottola of Warwick and Louis Capalbo of Chapel Hill, North Carolina. He was the brother of the late Joseph Capalbo, Margaret Burdick and Susan Stefanski.

A Christian funeral mass will be held on Saturday August 28 at 10 am at St. Michael’s Church, 80 Farnum Pike, Smithfield.

The Entombment with Military Honors will take place at Highland Park, Johnston.