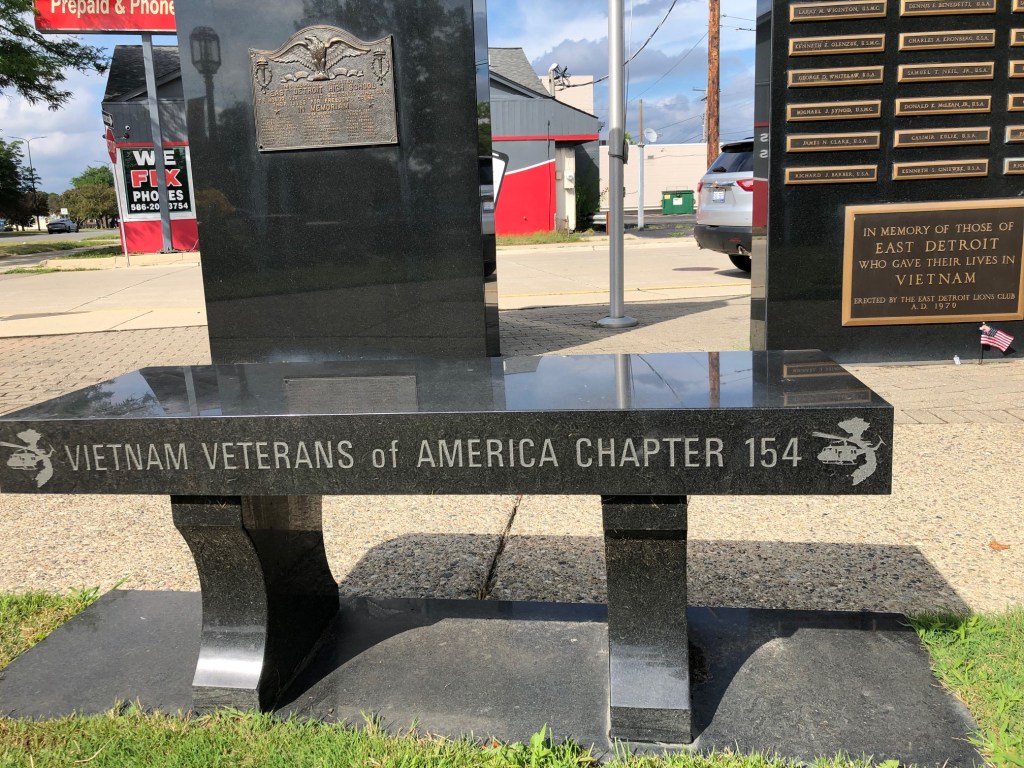 When the City of Eastpointe undertook city office renovations years ago, the plan was to relocate the existing Veterans Memorial.

Members of Vietnam Veterans of America Chapter 154 set out to raise funds to ensure that veterans of all conflicts in the town of Eastpointe would continue to be honored on a memorial on town property.

The memorial, originally established in 1970, bore the names of WWII and Vietnam casualties from the area. Later, the Eastpointe Veterans Memorial honored those who served in the Korean War and the Persian Gulf War, in Iraq and Afghanistan.

These tributes are very personal.

“It was built by the Eastpointe Lions Club,” former Chapter 154 president Patrick Daniels said. The new one was built when the city was going to rebuild the city hall and wanted to move it to the back of the building and we said no. Ken Theil, Greg Bowman and myself got involved with Suzanne Pixley and the city manager to keep it front. Greg coordinated all the construction.

Chapter 154 contributed $15,000 toward the cost of the new memorial, which is highly visible at the corner of northbound Gratiot Avenue and Aurora Street.

“The World War II plate was in a closet in the old one-room schoolhouse. I said we had to have it, and the school board agreed to give it to us. The Vietnam plates were out of the old memorial. Everyone grew up in East Detroit or still lives there today.

Genealogists Ruth and Charlie Babcock have conducted decades of research on Michigan veterans for various memorials.

“Ruth and Charlie did the research for us and we sold the bricks to help offset the cost,” Daniels said.

“The guys I grew up with were Ronnie Lee Obney who lived on Brittany Street and David Dell Graham who grew up in Tuscany about eight houses away from me. His family moved to Cass City when he was around 16. Ronnie’s brother, Gary, still lives in the family home in Brittany. Years ago, I used to stop by to see his father and visit him. He became my buddy and one year I picked him up and pushed him in a wheelchair for the city’s Memorial Day Parade. We just had a great day. Ronnie’s mother was a Sunday school teacher and we used to meet at his house to catch the bus to Sunday school,” Daniels said.

Ronnie Lee Obney is commemorated on both the Eastpointe monument and on Daniels’ Harley-Davidson motorcycle. At a Harley Owners Group meeting, a man presented Daniels with a set of government-issued dog tags bearing Obney’s name. Obney’s parents gave the tags to Daniels’ cousin, and they changed hands until they came to Daniels as a keepsake.

“Ronnie wore them when he was killed in Vietnam in 1968,” Daniels said.

An inscription on the memorial reads: “In memory of all veterans of the Korean War. They told us: we will have peace even if we have to fight for it. We fought in the mountains of Heartbreak Ridge and landed at Inchon. We froze in the winter and baked in the summer sun. At times we were vastly outnumbered, but we always fought and many of us gave our lives for freedom, justice and peace.

At least three victims whose recording house was East Detroit are identified as being from the Korean War.

Another inscription on the plaque reads: ‘In memory of all veterans of the Persian Gulf War.’There is no one more dedicated, more committed to the hard work of freedom, than every soldier and sailor, every marine, airman and coast guard, every man and woman now serves in the Persian Gulf.—President George Bush.Quote is from President George HW’s State of the Union Address Bush in 1991.

A plaque unveiling was held on November 15, 2014. VVA Chapter 154 is committed to the upkeep of the monument.

Realizing the importance of the memorial to local veterans, Brett Meyers of Boy Scout Troop 154 ​​decided that its repair would make a good Eagle Scout project.

“When he was looking for a project, I gave him the VVA 154 phone number and he contacted President Gary Purcell,” said Maria Myers, Brett’s mother. “Brett loves military history. It was his way of giving back.

When Brett Myers contacted VVA Chapter 154, he learned that many of the names carved into the brick pavers that support the memorial were nearly unreadable, but could be restored by painting them with a special black paint. He scheduled crews to work for two weekends and extra days.

Working in extreme heat, scouts and other volunteers knelt or lay down on the hard brick surface and began the painstaking work of making the names in the bricks dark and legible again. Passers-by stopped to inquire about their task. They heard about the memorial from the Boy Scouts.

Routine cleaning of the monument is supported by VVA Chapter 154. Member Dave Porter leads a team that maintains the memorials and grounds around the Eastpointe Memorial, and the Vietnam Memorials at Freedom Hill County Park in Sterling Heights. A new memorial is planned in the park for post-9/11 veterans.

Etched brick pavers from other veterans service organizations and service clubs support the maintenance and improvements of the Eastpointe monument. Veterans buy the bricks for themselves or with the names of comrades. Anyone can buy a brick just to say thank you for the vets service.

Applications are available at the memorial site or at the VVA Chapter 154 Veteran Support Center, 18025 15 Mile Road, Clinton Township. The brick pavers are 4 inches by 8 inches with three type lines and are available at $50 for individuals and $100 for nonprofit service organizations.

“We’re running brick money,” Purcell said. “Every time we take money and put bricks, we help maintain the monument. Over time the names faded away until you could barely read them. Brett puts the black paint back on to make them legible. We and the Catholic veterans offered to help with the costs, but Brett took care of everything.

Send news from service clubs and veterans organizations to Linda May at [email protected] or call the landline 586-791-8116.