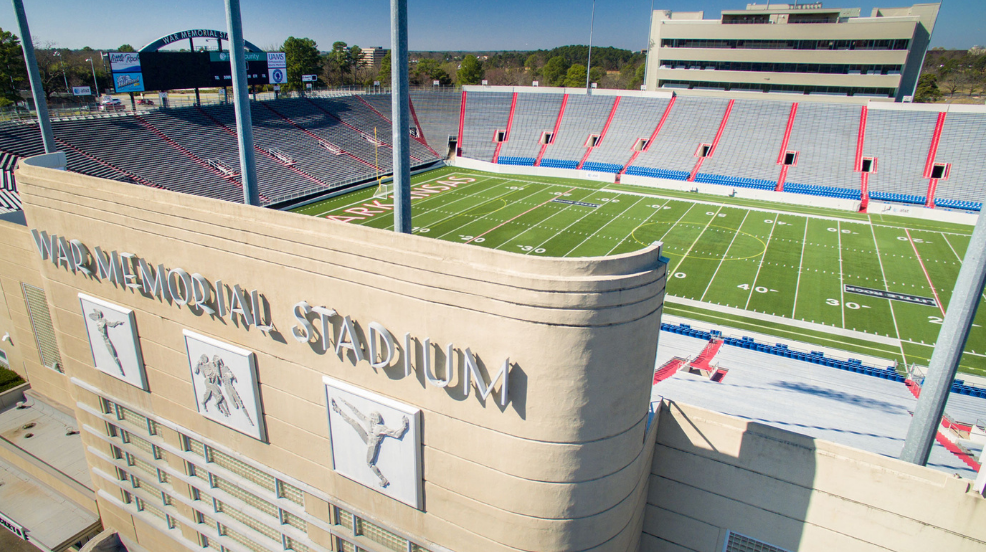 Simmons Bank announced Friday, October 22, that, as it continued negotiations on a title sponsorship deal with the city of Memphis, it had chosen Simmons Bank Liberty Stadium as the stadium’s new name. Earlier this month, negotiations to be the title sponsor of Liberty Bowl Memorial Stadium began between the city and Simmons.

The War Memorial Stadium was built in 1948 and pays homage to the Arkansans who gave their lives in the service of their country during WWI and WWII.

“Our partnership with the War Memorial Stadium Commission and the Arkansas Department of Parks, Heritage, and Tourism provides the opportunity to honor our veterans and make improvements to this historic stadium.” said George Makris, Jr. chairman and CEO of Simmons Bank. “It is an honor for Simmons Bank to be a part of the next chapter of War Memorial Stadium.”

“War Memorial Stadium has a rich history as a sports and entertainment venue that honors our state’s veterans,” said Stacy Hurst, director of the Arkansas Department of Parks, Heritage and Tourism. “With the support of Simmons Bank, we can ensure that the stadium remains a state treasure for many years to come.”

In Memphis, Makris said the name change from “Memorial” to “Liberty” was supported by the community.

Although history suggests the use of the original name, Memorial Stadium, the Memphians’ incredible support for the use of the word ‘Liberty’ in the stadium name has resulted in a new name for the stadium – Simmons Bank Liberty Stadium, “Makris said.” The feedback we received, especially from veterans, was that ‘Liberty’ more widely recognized the service and sacrifice of our veterans by remembering why they did. served so faithfully – to preserve our freedom. ”

Opened in 1965 as Memphis Memorial Stadium, the stadium honors veterans of WWI, WWII and the Korean War. It was renamed Liberty Bowl Stadium in 1975, the stadium is home to the University of Memphis football team, the Southern Heritage Classic and the AutoZone Liberty Bowl.

Simmons also announced a pledge of $ 110,000 to the Woody Williams Foundation, a nonprofit public outreach charity to honor, recognize and serve members of Gold Star families and their loved ones.

Hershel “Woody” Williams served in the Battle of Iwo Jima with the 21st Marines, 3rd Marine Division. Now 98, Williams is the only surviving WWII Marine to wear the Congressional Medal of Honor. To date, Williams and his foundation are responsible for creating 88 Gold Star family memorials across the United States, with over 79 additional monuments underway, spanning all 50 states and Guam.