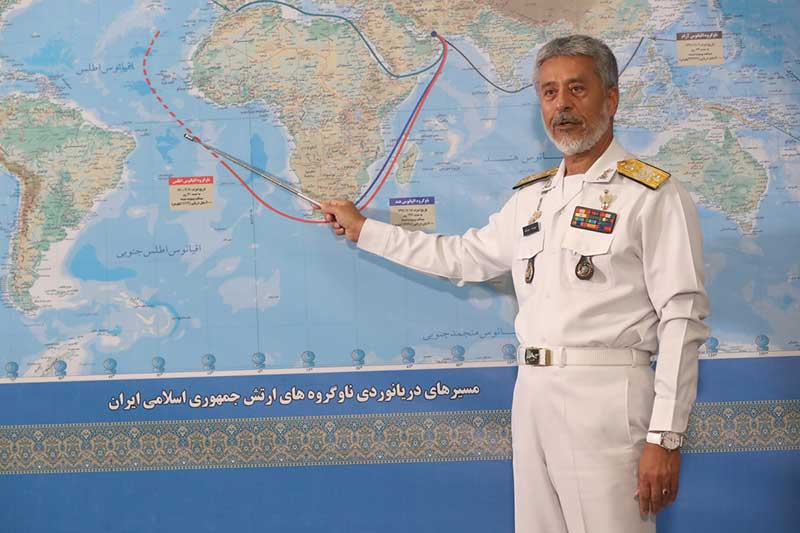 
The US military is closely monitoring the movements of two Iranian warships sent for the first time to the Atlantic Ocean on a mission to safeguard the interests of the Islamic Republic on the high seas.

“We are monitoring the deployment of these two ships,” Pentagon spokesman John Kirby said on Friday.

Amid speculation that the naval contingent of the Moudge-class destroyer Sahand and the intelligence vessel Makran was heading towards Venezuela, Kirby declined to discuss what the ships’ targets might be, but stressed that they would remain in the crosshairs of US forces.

“I think the leaders in Tehran should be asked questions about their intentions,” Kirby said. “So I’m not going to speculate on what they think they’re trying to achieve, but we are watching and keeping an eye on it.”

The mission was announced at a press conference held Thursday by the deputy coordinator of the Iranian military, Rear Admiral Habibollah Sayyari, the country’s former navy commander. He said that Sahand and Makran, who belong to the 77th Strategic Fleet of the Iranian Navy, began their journey on May 10 and have since “been able to enter the Atlantic Ocean for the first time without mooring in ports in other countries.”

Sayyari said the trip was undertaken during a period of inclement weather conditions at sea “to improve naval capability and prove the long-term sustainability” of Iran’s naval prowess. He claimed this came amid doubts from the United States, which Iranian officials sometimes call “global arrogance.”

“When we declared our intention to enter the Atlantic Ocean, some countries, including global arrogance, declared that the navy of the Islamic Republic of Iran was not able to do so,” said Sayyari, “but in practice they saw that we did it with force.”

The ultimate mission of the Iranian navy, he explained, “is to defend the maritime borders and protect the resources and interests of the Islamic Republic of Iran at sea, a mission which the navy has successfully accomplished until ‘now”.

The next day, as the United States issued its own warning, the leader of Iran’s other naval fleet, the Revolutionary Guards, said Tehran had its eyes on its enemies as well.

“Revolutionary Guard naval force cadres are carefully monitoring all enemy movements,” Commodore Alireza Tangsiri said on Friday during an inspection of the missile units in remarks shared via semi-official social media. , “and are fully prepared to preserve and safeguard the interests of the Islamic Republic in the Persian Gulf and distant seas.”

Ships carrying Iranian oil have already crossed the Atlantic Ocean to supply petroleum products to Venezuela, a partner country currently in the throes of economic and political turmoil. Tehran and Caracas are both facing sanctions from Washington, which ordered the seizure of some of these ships and their cargo.

The United States has also alleged that Iran and its elite Revolutionary Guards have developed other strategic ties.

Defense Secretary Lloyd Austin told lawmakers at a congressional hearing Thursday that he was “concerned” about the prospect of Iranian ships potentially transporting weapons to Latin America.

State Department spokesman Ned Price weighed in on the issue Thursday in response to questions from the press. While he, like Kirby, refused to speculate on the intentions of Iranian ships, he warned the United States was ready to take action.

“We are ready to take advantage of our competent authorities,” Price said, “including sanctions, against any actor who allows Iran to supply arms to violent partners and proxies.”

International sanctions against Iran’s oil sector stemming from the country’s nuclear program – which Tehran has always denied aimed to produce a weapon – were lifted by a 2015 nuclear deal with the United States alongside China, France, Germany, Russia and the United Kingdom. Former President Donald Trump then unilaterally abandoned the deal, doubling down on restrictions.

His successor, President Joe Biden, has tried to reinstate the deal, but is seeking further assurances from Iran that he will first roll back the steps he took in the deal in response to -respect of the western parts. Negotiations to this end are continuing in the Austrian capital of Vienna.

The Biden administration has yet to announce any re-engagement initiative with Venezuela, where President Nicolás Maduro remains in power despite severing US ties with him in early 2019 in favor of the head of the National Assembly of the opposition Juan Guaidó, who accused his socialist rival of electoral fraud.

This is news in development. More information will be added as it becomes available.

How safe is the US President’s “nuclear football”? Pentagon watchdog to find…