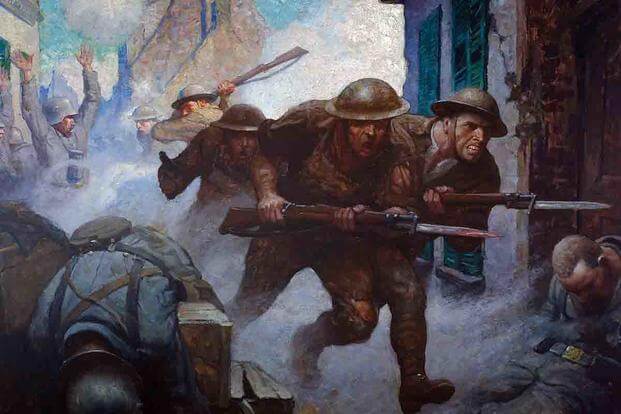 The U.S. military has worked actively to remove references to Confederacy and Confederate leaders in recent years, but that has not always been the case. Just over 50 years after the Civil War ended, parts of the United States were still embracing that troubled past.

Even so, the US military wanted to bring something uniquely American to the European trenches. The commander of a particular unit in the southern army wanted his men to use the Confederate rebel cry to “sow terror into the hearts of the enemy”. And they needed the help of Confederate Civil War veterans to do it.

Fort Gordon near Atlanta, Georgia (named after a Confederate general) was known as Camp Gordon during the build-up to World War I. It was used as a training camp for many of the 2.8 million men who were drafted to serve in the war.

It was first opened in July 1917 and became the training ground for the 82nd Division, later known as the 82nd Airborne Division, when soldiers could actually fly. The camp operated from 1917 to 1919 and trained many conscripts from Georgia.

The man installed to oversee the formation of the 82nd Division at Camp Gordon was General Eben Swift, a veteran of the Spanish–American War and the Pancho Villa expedition and former principal of the Army War College.

Swift wanted to surprise the Germans with a special surprise when the American army arrived and began to fight in the trenches. He wanted to teach the 82nd Division the “Rebel Yell”, a battle cry used by Confederate soldiers when charging Union lines during the Civil War.

He met with Federal Judge William T. Newman of Atlanta, a former Confederate soldier who was still in contact with a company of his fellow veterans in Georgia, to teach the battle cry to new soldiers of the 82nd.

“I want my men to teach the Rebel Yell for their use in France,” Swift told the Times-Dispatch, a newspaper in Richmond, Virginia, in 1917. “I met Judge Newman and suggested that the Rebel Yell not wouldn’t sound bad when we meet The Germans. Our boys will use it when they go over the top.”

Although there are no recordings of the shout used during the Civil War era, there are recordings of Confederate veterans performing the shout at meetings years later. The video below is from Smithsonian Magazine:

According to the article, Newman did all he could to round up the elderly veterans at Camp Gordon to teach the troops the “bloody” battle cry. Union veterans remarked that the Rebel Shout was effective on the battlefield, saying “if you pretend you heard it and weren’t scared, that means you didn’t. have never heard”.

Swift expected the use of the Rebel Yell to spread throughout the Army once the 82nd began using it, and the service adopted the Confederate tradition for the foreseeable future. Instead, he died with the last of the Confederacy’s remaining veterans.

— Blake Stilwell can be reached at [email protected] It can also be found on Twitter @blakestilwell or on Facebook.

Whether you’re considering joining the military, seeking a post-military career, or keeping up to date with military life and benefits, Military.com has you covered. Subscribe to Military.com to receive military news, updates and resources straight to your inbox.