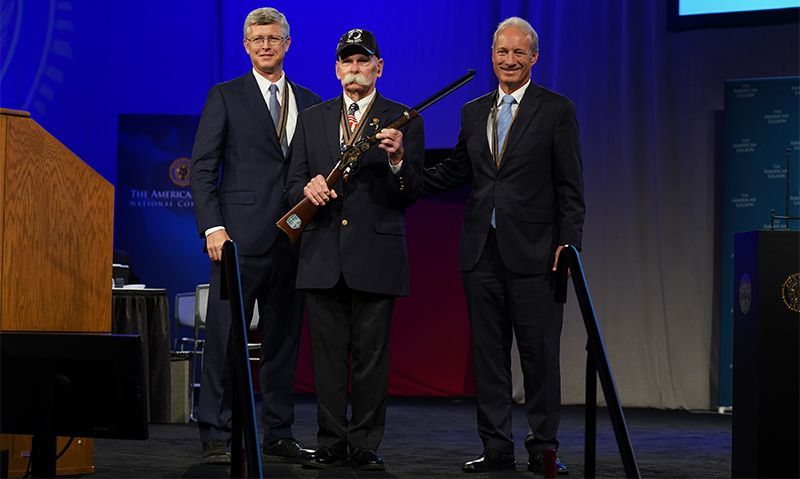 The Onderdonk Prize goes to the Northeast POW-MIA Network

First Liberty Institute President and CEO Kelly Shackleford returned two decades ago during his presentation at the American Legion National Convention in Phoenix on September 1.

“It was almost 20 years ago when we realized something was going on in the country,” Shackleford said. “There have been attacks on some of our monuments. First, these are the Ten Commandments. We realized that there would be attacks on our veterans memorials. It was just a sign of what was to come.

First Liberty contacted former national judge advocate Philip B. Onderdonk, who agreed and the two organizations worked together to protect several prominent veterans memorials from destruction. Among them:

• Mount Soledad: The Mount Soledad National Veterans Memorial was designed in 1952 by American Legion Post 275 of La Jolla, California to honor Korean War veterans. A 27-foot cross at the top of Soledad Natural Park in La Jolla was built in honor of the American servicemen who died during the two world wars and the Korean conflict. The case was the subject of various lower court decisions, but the memorial ultimately prevailed. “This memorial still stands,” Shackleford said. “And you can still see that memorial today.”

• Mojave Desert: The memorial was erected in 1934 by veterans of the First World War “who just wanted to put something in place to remember those who were lost in this war”. First Liberty and the American Legion won a case in the Supreme Court, which allowed the memorial to continue to exist, although the ruling revolved around technical issues.

• Bladensburg Peace Cross: Two years ago, the American Legion and First Liberty returned to the nation’s highest court in a case involving the 40-foot Bladensburg Veterans Memorial Cross of Peace. The memorial was erected in 1925 by Gold Star Mothers and the American Legion to honor 49 sons who made the ultimate sacrifice in World War I. The judges ruled for the American Legion, 7-2. “It wasn’t just a victory for the Bladensburg center,” Shackleford said. “It set a precedent. It was truly a historic victory that all memorials and monuments across our country were presumed constitutional and that these attacks were ended. It’s a huge change.

However, there are other pending cases, Shackleford pointed out.

One concerns a POW-MIA missing men table that was set up in a VA hospital by the Northeast POW-MIA network. Included on the table is a Bible. The lawsuit calls for the Bible to be removed from the exhibition.

“The man who donated the Bible was in a German POW camp for almost a year,” Shackleford said. “He said the Bible was what got him through that experience. He wanted to donate this Bible for this exhibit.

To honor the struggle of the POW-MIA Network, Shackleford presented the organization’s president, David Haskell, with the Philip B. Onderdonk Jr. Religious Freedom Award on the stage at the national convention. The prize is a gold-plated Henry Repeating rifle engraved with images of a bald eagle, the Statue of Liberty and the Liberty Bell.

The award is presented annually to someone who has done the most for religious freedom in the United States.

Haskell thanked North Conway Post 95 in New Hampshire for their help in setting up the table at the VA in Manchester, NH. He credited Bob Jones with starting the network from American Legion Post 49 in Vermont 34 years ago.

“The Manchester VA table is a symbol of what we will stand for forever, until all of our POWs and MIAs have returned home safely,” Haskell said.

Shackleford reminded attendees that the legal battle will continue.

“We are so proud to be with the American Legion,” he said. “We’re going to keep fighting until we win. These are the battles to come.