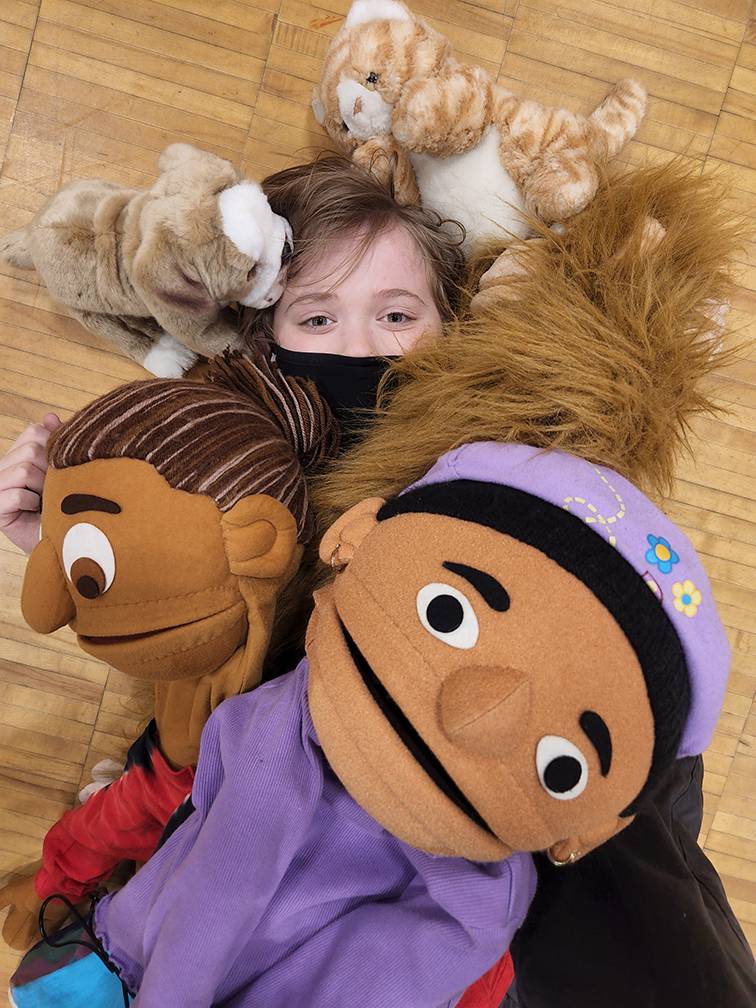 A few big things happened in 1982: The Commodore 64 was released, prompting Time magazine to nominate “the computer” as Person of the Year; the Vietnam Veterans Memorial was inaugurated; and Prince William was born. ET was the big movie of the year and Michael Jackson released Thriller. But the biggest thing to come out of 1982 was the Vermont Family Network’s Puppets in Education.

Puppets in Education (or PiE, as it is often called) began with just six puppets, four of which had disabilities, and had combined funding from the state Department of Education and the United parents/teachers. They focused on schools in the Burlington area and featured skits related to disability awareness and abuse prevention.

Slowly, word of PiE’s work grew, as did their stable of puppet characters, sketch subjects, staff and volunteers. Prior to the pandemic, PiE offered twenty different skits, including: Autism/Friend-2-Friend, Blindness, Bullying Prevention, Cultural Diversity, Cerebral Palsy, Healthy Habits, Friendship, and Feelings. We have almost as many puppets as skits, each with their own personality and representing the diversity children see in their schools and communities.

Over the decades, PiE has grown from a Burlington-focused program to one that offers programs across the state of Vermont, upstate New York, and even Connecticut and Massachusetts. In 1989, PiE reached 875 children and adults with its abuse prevention program. In the 2021-22 school year, we reached over 7,000 people in two states and hosted over 130 performances (virtual and in-person). Over the 40 years of PiE, we have had the honor and pleasure of reaching 300,000 people with nearly 5,000 performances.

There have been so many memorable experiences over the years. Here are a few :

“I’ll never forget the time a student asked (after the depression skit) if you ever felt like you had a hole in here (pointing to her heart). … Also when they asked Mark [puppet] if he had an atomic wheelchair, not just battery powered, but something more connected to space. —Mary K. Dennison, former board member of the Vermont Family Network and director of PiE

“When I talk to the folks at PiE, I often share the story of a time when you and the puppets presented the show about preventing sexual abuse. You asked the children to draw an outline of their bodies on a large sheet of paper and then you asked them to color it in. I remember one time you said that a young girl had colored her groin area red and it was a red flag that something at home may not be right, and you contacted the authorities. They found out she was sexually abused. This story has always struck me how powerful PiE shows are. —Rich Graham, former board member of Puppets in Education

“When I worked in public schools several years ago, I had a second grade student on the autism spectrum. I decided to contact Puppets in Education to introduce the ‘Friend 2 Friend’ program. to all students at this grade level. … During the presentation, the students were fully engaged and enjoyed holding the puppets and making them “talk.” The question-and-answer period reinforced common language and strategies to use, and allowed students to share their own experiences. The survey showed that children remembered several strategies for interacting with others in a more empathetic and supportive way, and that teachers were also more aware of their communications The family of the student on the spectrum was especially grateful to have had the opportunity to acknowledge their child’s difference in a positive way.—Carol Irish, educator

“I am proud to have been part of an organization dedicated solely to the education and protection of children in all aspects of their lives. … We no longer use puppets as another means of educating on a particular issue; the problem is the children and what they need. … We have established ourselves as a major partner in caring for Vermont’s children because we continually ask ourselves what children need and how we can better serve them. — Josiah Pearsall, former puppet educator in education

“I am from Vermont. When I was in elementary school, Puppets in Education came to my school and played. I remember they did a skit on disabilities. I think what you are doing is great. Your lessons are easy to understand and they are very memorable. The way you work with the puppets allows children and adults to really feel open to opening up. I hope if I end up staying in Vermont, I can get you to come to the school I work at. Your business is wonderful. —UVM 2009 student in education

“I just want to say that I really enjoyed your puppet show. I think people who have watched your show will really think twice about hurting someone outside or inside. Part that I really liked was Claire telling Eddie how to explain to Jason that bullying wasn’t funny or okay. And that’s when I think people really started to listen. Another part that I did really loved is when some kids came up and just improvised. Thanks for coming to our school. —From the Girl in the Green Sweatshirt (Children’s Letter, 2005)

Over the past 40 years, we have not only had the honor of teaching children empathy, respect and inclusion, but we have also been able to reach the children of children who have seen some of our first shows. . And while we take the time to honor the past and all the hard work that has been done, we also look to the future. We constantly ask ourselves, “What do children need right now? then straining to provide it.

In this fast-paced, tech-driven, and politically divided world we live in, it seems almost odd that something as simple as a puppet can still have a tangible impact on the lives of our children. And yet, we have seen that Puppets in Education remains a relevant and necessary program in the lives of the youngest members of our community.

VTDigger press releases are provided by the submitting organizations and may include mention of VTDigger staff, family and directors.

Use our self-service press release portal to promote it on VTDigger and reach our entire web and email readership.

How to Recover from Hurricane Ian and Hurricane Fiona