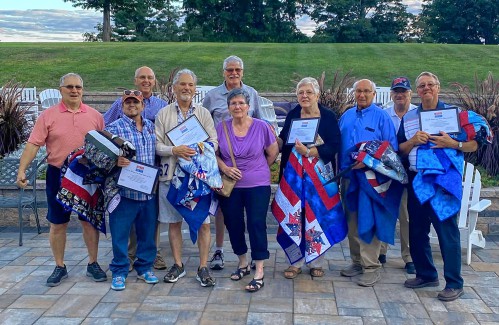 The Recorder – A warm and welcome surprise for veterans

“It was a huge surprise,” said Navy veteran Jim Tessier, who now lives in Eliot, Maine. “They did a great job keeping it a secret.”

Donna Adams-Argy, a member of the Millbury Freedom Quilters and organizer of the reunion, said she started working on quilts for veterans at a quilt retreat earlier this year. Each quilt, handmade with patriotic images and the nation’s colors, continues a tradition that has honored veterans nationwide since 2003, according to the Quilts of Valor Foundation.

“Anyone who served in the United States Armed Forces, I think deserves recognition,” Adams-Argy said.

Adams-Argy said she took extreme care to ensure veterans were not notified of the award until the quilts were presented to the union. With only a select few people involved in the ceremony knowing, the awarding of the quilts “came as a complete surprise to everyone from veterans to everyone who attended the Class of 1967,” Adams-Argy recalled.

“Another person I worked with said she was stunned,” she added.

“It blew my mind,” said Air Force veteran Robert Walker, who now lives in Gill. “It was so sudden and unexpected that this organization made this beautiful quilt. I was just blown away and… so honored to be in the company of my other classmates who received the same honor.

Tessier said he and the other veterans in attendance were “all very, very happy” when they were recognized. Gaining recognition about half a century into his service took on added importance, he added, given the lack of respect service members received while serving in the controversial Vietnam War period.

“It meant a lot to me — and I’m sure the other eight who received (a quilt) — because it meant people in our class felt it was important to recognize our service,” Tessier said.

“It’s hanging on my bedroom wall right now,” Walker said of her quilt. “I watch it when I wake up every day and will watch it every night before I go to bed for the rest of my life.”

Looking back on her time at Turners Falls High School, Tessier recalls having a “really great class” that shared a close bond. He particularly remembered the success of the football team in his senior year, as well as a school play where almost the whole class was involved. 55 years later, the bonds between classmates remain strong.

“There were a lot of people in the audience crying,” Tessier observed when receiving the quilts. “It made a great meeting even better.”