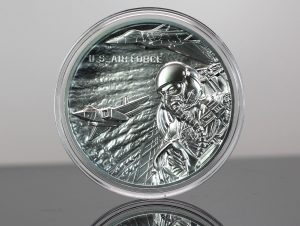 US Mint product subscriptions work much like a magazine subscription. When you sign up to receive a product family, they are automatically shipped to you as they become available.

The largest 2.5 ounce armed forces silver medals have ever been released

A registration option is and was not available for any of these larger medals.

The Mint’s listing page, found here, displays a prize of $65 and each with no mintage, product, or domestic order limit.

Listing information indicates that two will be issued each year, in accordance with the semi-annual release schedule of their larger 2.5 ounce medals.

Both sizes of medals are struck in 99.9% fine silver. The one ounce medals will have a diameter of 1.598 inches compared to 2 inches for the 2.5 ounce medals. Designs are shared between sizes