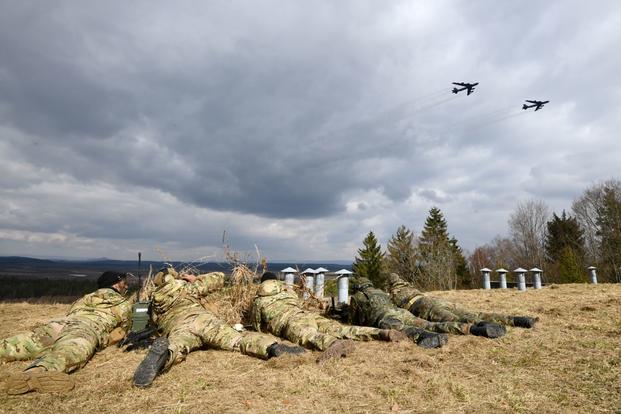 In February, US Marines teamed up with Navy SEALs and Army Green Berets in Japan to train in one of the most important but lesser-known combat skill sets: close air support.

According to the Department of Defense, close air support refers to strikes conducted by fixed or rotary wing aircraft against enemy targets that are close to friendly forces and which require detailed integration of these aircraft with the fire and movement of these ground forces.

The conduct of such strikes is a collaborative effort between the pilot and Joint Tactical Air Controllers, known as JTACs. A JTAC serves as the pilot’s eyes on the ground and is essential for directing ordnance to targets, often making the difference between a successful strike and a friendly fire incident.

The use of close air support “in medium to high threat environments” against priority targets “is extremely complex and requires extensive coordination to be executed successfully,” said a JTAC Green Beret assigned to 1st Task Force. special forces in a press release on the February exercise. .

Only the US Air Force has a dedicated career field for Joint Terminal Attack Controllers: the Tactical Air Control Team Operator. Depending on the Air Force squadron to which they are assigned, these operators may be attached to conventional or special operations units and, in the field, they support the field commander by coordinating air support close.

Many special ops units will also send their own commandos to take the same courses to qualify as JTACs, just as they would with specialties such as medic, sniper, or breaker.

Close air support continues to evolve. At a recent training event in Europe, the Air Force paired JTACs with B-52 bombers and conducted “beyond line of sight” target acquisition exercises, meaning the JTAC could not physically see the target they were calling an airstrike on.

B-52s can perform precision strikes with “smart bombs”, but it is rare to see the strategic bomber, some of which are capable of carrying nuclear weapons, tasked with close air support.

Other Air Force aircraft, such as advanced fighter aircraft, can perform close air support but are not well suited for it.

Only one fixed-wing aircraft, the A-10 Thunderbolt II, also known as the Warthog, was designed specifically for close air support, and after nearly 50 years in service, it is still considered the best in what he does.

Because close air support takes place very close to friendly forces, there is no room for error. The US military has a very strict checklist – called line 9 – that must be completed before a close air support mission can be approved.

The first three lines of the checklist cover the aircraft’s desired entry point, the heading it should run on, and the distance it should cover. Essentially, these lines tell the pilot which direction to fly and how far the attack should cover.

Rows four through six cover the target information, namely its altitude, description, and coordinates. For coordinates, a JTAC may use the U.S. Army Grid Reference System or standard longitude and latitude.

The last three lines cover the target mark, friendly troop position, and exit. Along these lines, the JTAC will inform the aircraft if the target has been marked and how – for example, with colored smoke, an infrared laser or an infrared strobe – where the friendly forces are (which is probably the hardest part). larger), and where the plane should go after it hits.

The process is not foolproof and fatal mistakes have been made. One of the best known took place at the very beginning of the war in Afghanistan.

At the time, US Army Green Berets linked up with future Afghan President Hamid Karzai in southern Afghanistan and fought the Taliban.

During one battle, an Air Force Tactical Air Control Group operator attached to the Green Berets team gave the wrong coordinates and called for an airstrike on his own position. Two Green Berets were killed and several others injured.

Close air support is an essential element of modern warfare, and the experience of the US military makes it a very effective fighting force, but it is also a very dangerous skill set that requires extensive training, attention to detail and a composure under pressure.

Stavros Atlamazoglou is a defense journalist specializing in special operations, a veteran of the Hellenic Army (national service with the 575th Marine Battalion and Army HQ) and a graduate of Johns Hopkins University.

© Copyright 2022 Business Insider. All rights reserved. This material may not be published, broadcast, rewritten or redistributed.