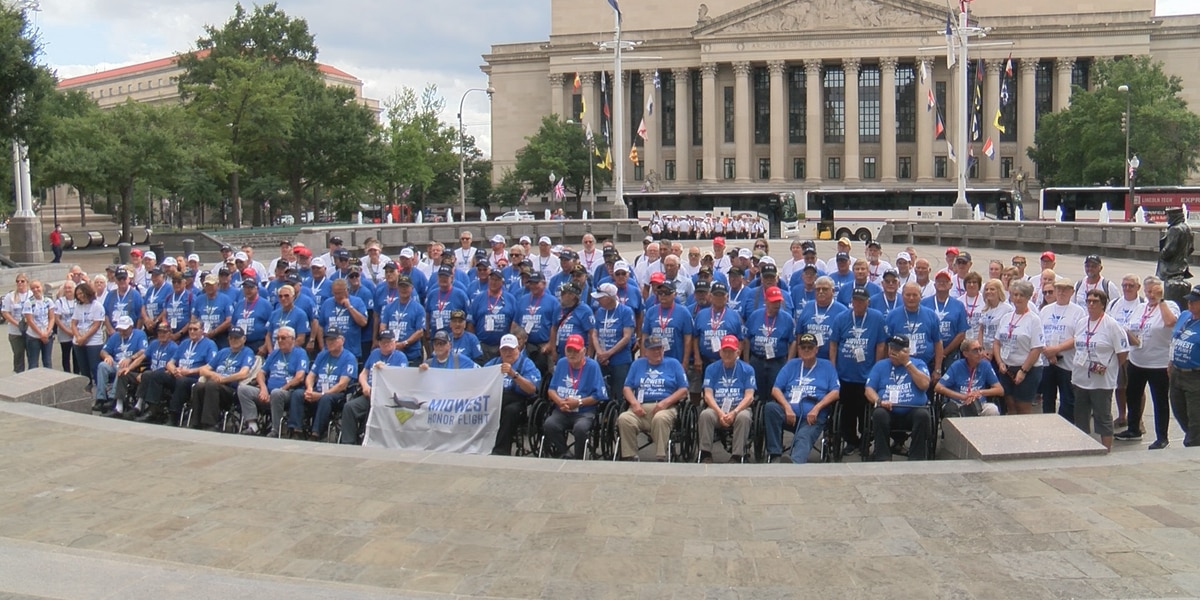 WASHINGTON DC (KTIV) — After disembarking from that charter plane, it was time for veterans to see those memorials and monuments. For many veterans, it was their first time to the nation’s capital.

Let’s start here at the US Navy Memorial in Washington DC The fountains are filled with water from the seven oceans and the Great Lakes. This type of confluence is something veterans have been talking about all day. A journey that brings together service members from every branch.

“Nowadays we are still all Americans when you stand here against the backdrop of the Air Force Memorial. It’s a special day. Happy to be here,” said Scott Ulrich, a volunteer and Air Force veteran.

The Korean War Memorial is one of the most walkable memorials we saw today. And this memorial has special meaning for a Sioux City veteran. Thomas DeWitte presented the Eagle Scout award to Aaron Van Beek years ago.

It turns out that Van Beek would launch this iteration of the Midwest Honor Flight, returning the favor to DeWitte, who got to see Washington DC for the first time.

“Well, I think it’s a really fitting way to honor veterans who have given some of their years to serve,” said Thomas DeWitte, a Korean War veteran.

The memorial visits did not stop there.

Veterans got a personal, up-close look at the Changing of the Guard at Arlington National Cemetery, a photo op at the Iwo Jima Memorial, a stop at the Air Force Memorial that includes a view of the Pentagon, the Washington Monument and the US Capitol building.

All of the stoppages had a real impact on WWII veteran Anthony Reidell. He had seen many memorials before, but not like this, surrounded by his military colleagues.

“I’ve seen a few before, but I see what’s happening now in this kind of renewal of new memories,” said Anthony Reidell, a World War II veteran from South Dakota.

And the majority of veterans in this edition of the Midwest Honor Flight were from the Vietnam War. And that made this last stop here at the Vietnam War Memorial all the more special.

Besides the Honor Flight staff, there was another group of volunteers who made the trip possible. They are known as guardians.

People who have paid their own way to join the mission and support a veteran, one-on-one, throughout the day. Many were related to the veteran they were supporting.

But, some joined on their own and were matched with a veteran they first met that day. Honor Flight officials say the flight would have been impossible without their help.

“If you have the chance, donate for sure. Maintain it. It’s really important to vets and if you have that, want to volunteer as a caretaker, do it,” said Midwest Honor Flight Caretaker Diane Miller.

If you’re interested in taking an honor flight, becoming a guardian, or making a donation to help the effort, go to www.midwesthonorflight.org. Your impact could be felt right away.

Another flight is scheduled to depart from Sioux Falls on October 1.

Cash Advance Apps vs Payday Loans: Which is Better?