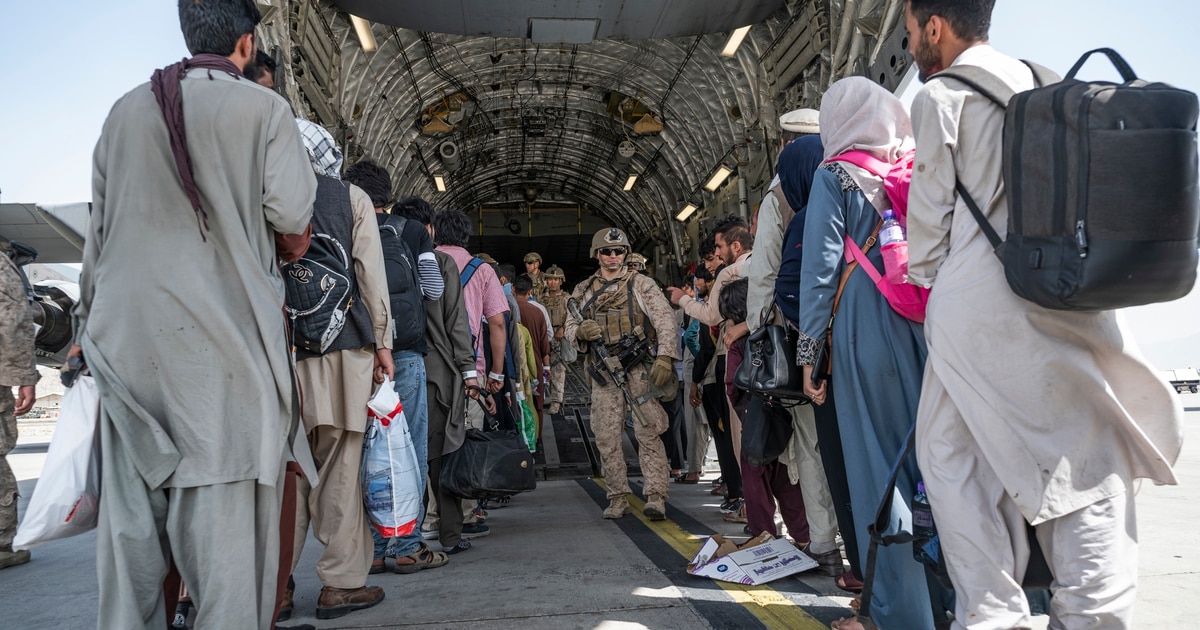 President Joe Biden on Sunday praised veterans groups and other outside advocates helping to evacuate thousands of refugees from Afghanistan as showing “America’s best” to the world.

But groups of U.S. veterans scrambling to save their foreign allies made it clear over the weekend that they expected White House officials to do more to prevent the humanitarian crisis from unfolding in the United States. other side of the world.

Monday a coalition of 46 ex-combatants and army-related organizations called for a meeting with administration officials on the next steps in Afghanistan and on “respecting our commitment to our Afghan allies” by removing them from the country.

â€œFailure to meet our obligations to these Afghans would not only be a risk to national security – damaging America’s reputation abroad and eroding confidence in our armed forces which is essential for future operations – it would also doom veterans and survivors of the conflict in Afghanistan to a life of moral injury, â€the group wrote in its request to senior White House officials.

Those involved include well-known advocacy organizations such as AMVETS and Vietnam Veterans of America as well as groups with close ties to the Democratic Party (and Biden White House) like VoteVets and High Ground Veterans Advocacy.

Many of the signatories have been working for weeks to help Afghan nationals, organizing online fundraisers, helping state and Department of Defense officials locate people in difficulty and deal with paperwork issues for families. Afghan women forced to flee their homes.

Register for the early bird

Receive the most comprehensive army news and information every morning

By providing us with your e-mail, you are signing up for the Early Bird Brief.

Earlier in the weekend, in a separate letter to Congress and the White House, a coalition of 16 military and veteran organizations (some included in Monday’s letter) said the disorderly evacuation of thousands Americans and refugees from Kabul in recent weeks suggest that “we have failed as a country to honor our commitments” to our foreign allies.

“Fix this now,” the letter said. “We are all committed to making the transition for these fellow combatants as smooth and welcoming as possible, and we stand ready to assist the US government and these [Special Immigrant Visa] applicants and families now. Please put us to work.

According to White House figures released on Monday, around 42,000 people have been evacuated since the end of July. The total includes a mix of Americans working in Afghanistan and Afghan citizens seeking safety as Taliban fighters regain control of that country.

On Sunday, Biden announced plans to mobilize civilian planes from U.S. airlines to help move refugees from overseas out of Afghanistan to areas where they can be treated and their immigration claims can be better processed. .

But almost all of this work has focused on the immediate evacuation effort, not on the long-term housing and welfare of the refugees.

Saturday’s letter from the group of 18 organizations – which includes the Independence Fund, the United States National Guard Enlisted Association and No One Left Behind, an advocacy group specifically focused on allied relocation foreign US military forces – also called for funding for support programs to help displaced Afghans.

“A general SIV-specific grant program that community organizations could apply to can be a good first start,” the group wrote.

The broader ex-combatant community also hopes to bring up such topics in a meeting with senior administration officials. The group of 46 organizations said it also wants the White House to address the issue of “confronting those who politicize the issue of refugee resettlement and condemn those who slander our Afghan allies.”

White House officials have yet to respond to that call for a meeting. Biden and his senior officials have pledged to contact foreign and domestic allies on the issues in the coming weeks.

The US evacuation effort in Afghanistan is scheduled to end on August 31. Biden left open the possibility of extending that deadline, but a Taliban spokesman said on Monday they would not agree to it.

Staggering costs – US military equipment left behind in Afghanistan