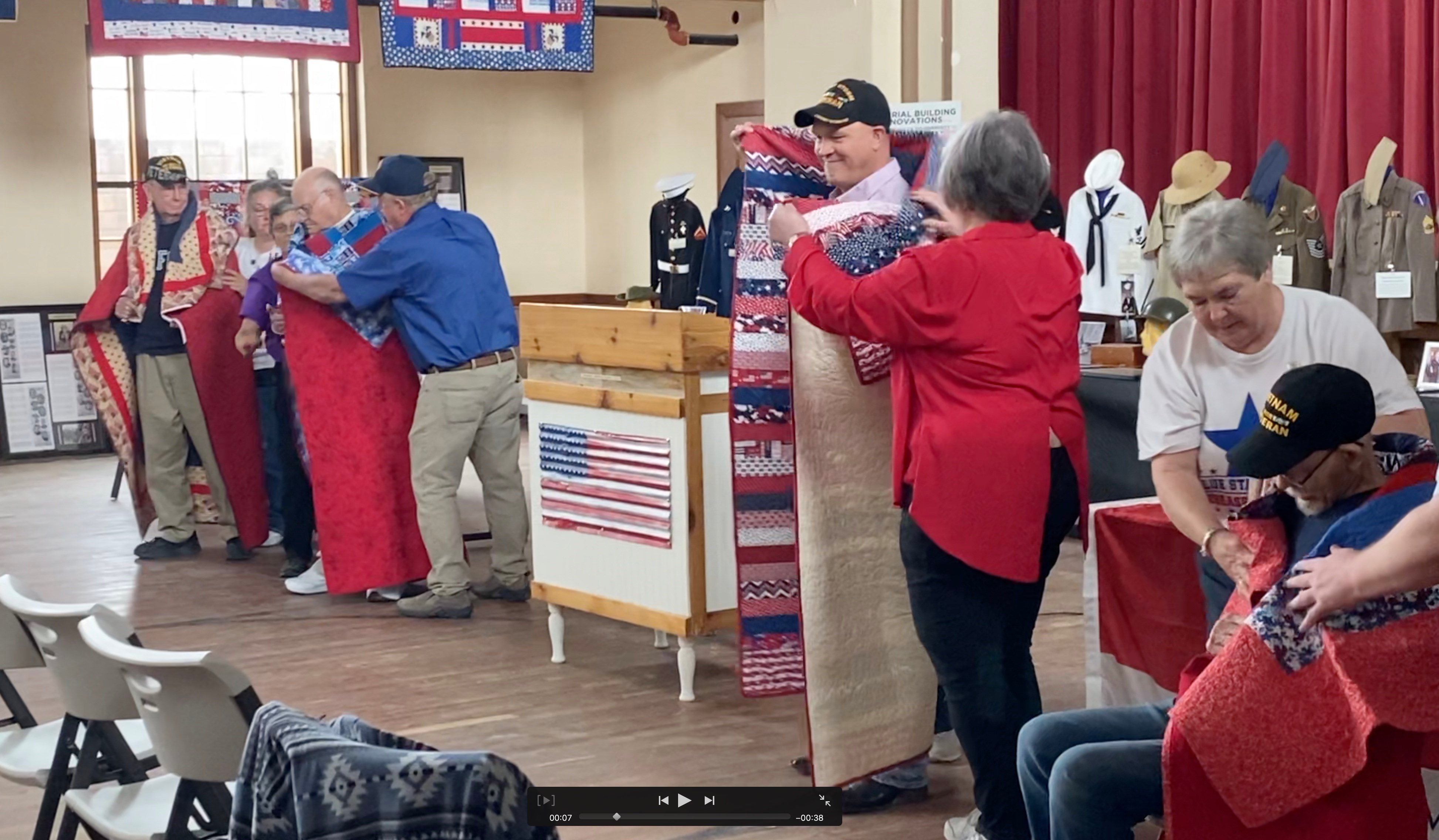 NEBRASKA CITY – A preview of the renovations to the Veterans Memorial Building in Nebraska City was offered over Memorial Day weekend, where valuable quilts were presented to veterans.

Blue Star Mothers Chapter 1 of Nebraska City has awarded more than 100 quilts to the men and women of military service in the area and the national chapters will award 13 quilts over Memorial Day weekend. The Blue Star Mothers of America has 200 chapters and has awarded over 212,000 quilts.

Drever was in the US Marine Corps during Desert Storm, serving in Kuwait for over three months, on and off the aircraft carrier USS Saipan. The Nebraska City High School graduate and Union resident said it was an honor to receive the Bravery Quilt.

Drever: “It kind of brings it all together because I know in the Vietnam era, say, guys weren’t welcome at all at home, so it feels good. I’ll probably put it in a ghost box with this and some of the medals and ribbons. “

Blue Star: “Our founder Catherine Roberts describes a Quilt of Valor as the civilian equivalent of a Purple Heart award. Our quilts are award winning, not just handed out like a magazine or video. This Valor Quilt unequivocally says thank you for your service, your sacrifice and your courage in the service of our nation. “

Here is the Saturday program as given by Tammy Chase.

The first veteran we are honoring right now is: Elisha Aaron Allen. Would you like to introduce yourself, please? Elisha, you will be ‘Al’ today.

Al Allen enlisted in the US Air Force on February 1, 1961; he spent twenty years in the service of his country. As Al prepared his fact sheet for us, the list of his missions goes on and on; hardly any place on this globe he hasn’t been to. Al received basic training at Lackland AFB, Texas. He was assigned to several units, including Strategic Air Command, Tactical Air Command, and Air Defense Command. Not only has he served in several Air Force bases in the United States, but also in several deployments in foreign countries, including the Philippines, Viet Nam, England, Thailand and Kadana.

Our second veteran at the moment is Allan Mark Behrends. Allan, could you come up front, please?

After the end of World War II, it was in the peace treaty between the United States and Germany that the American forces would occupy and train the Germans while they built an army. Allan’s service to his country and to the German people lasted six years, five months and 22 days.

Allan is from Nebraska City; he received his early education at a one-class school in Otoe County, District 30. Allan currently resides in Nebr. City.

The third veteran we are honoring right now is Matthew James Drever.

Matt enlisted in the United States Marine Corps on September 7, 1989. He served four years in the Marines, reaching the rank of Corporal E-4. Matt was sent for basic training in San Diego, Calif., And for additional training at Camp LeJeune, North Carolina. He was assigned to service in the LSB Landing Support Battalion.

Matt lists his hometown as Nebraska City; he graduated from Nebraska City High School. He and his wife, Tina, currently reside in Union, NE.

The fourth veteran we are honoring today is Robert Spevak.

Robert Spevak enlisted in the United States Army in August 1966; he was sent for basic training at Fort Polk, Louisiana. He was assigned to the 556th Transportation Company.

Robert was deployed to Vietnam with the 410th Transport Unit in 1967 and 1968; then sent to the service of the 579th Ordinance Company in Germany in 1968 where he remained until 1969. Robert received a marksman medal and a service medal in Vietnam.

Robert’s hometown is Nebraska City; he graduated from Nebr. City High School in 1966. He and his wife, Sandra, currently reside in Dunbar, NE.

Ladies and family members, you can now wrap your veterans!

Our founder Catherine Roberts describes a Quilt of Valor as the civilian equivalent of a Purple Heart award. Our quilts are award winning, not just handed out like a magazine or video. This quilt of valor unequivocally says thank you for your service, your sacrifice and your courage in the service of our nation. This is not a charity quilt; it is not a blanket.

If you are a quilter, you know that a quilt is made up of three layers held together by its quilt stitches. We like to think of layers this way:

The top of the quilt with its many colors, shapes and fabrics, represents the communities and the many individuals that we are.

The fleece, or fill, is the center of the quilt, its warmth. It represents our hope that this quilt will bring warmth, comfort, peace and healing to the recipient.

Support is the force that sustains the other layers. It represents the strength of the recipient, the support of their family, our communities and our nation.

Each stitch that holds the layers together represents the love, gratitude, and sometimes tears of the Creator.

On each quilt is a Quilt of Valor label that will tell you a little more about that quilt. From today, the story of this quilt becomes your story.

Veterans, we hope you will keep this quilt with you as a reminder that there are thousands of women and men across this country who are eternally indebted to you, and it is our pleasure to honor YOU with a Valor quilt.

US to hand over control of Bagram to Afghans

As the growing season gets off to a slow start, watch the farmers markets in the Twin…