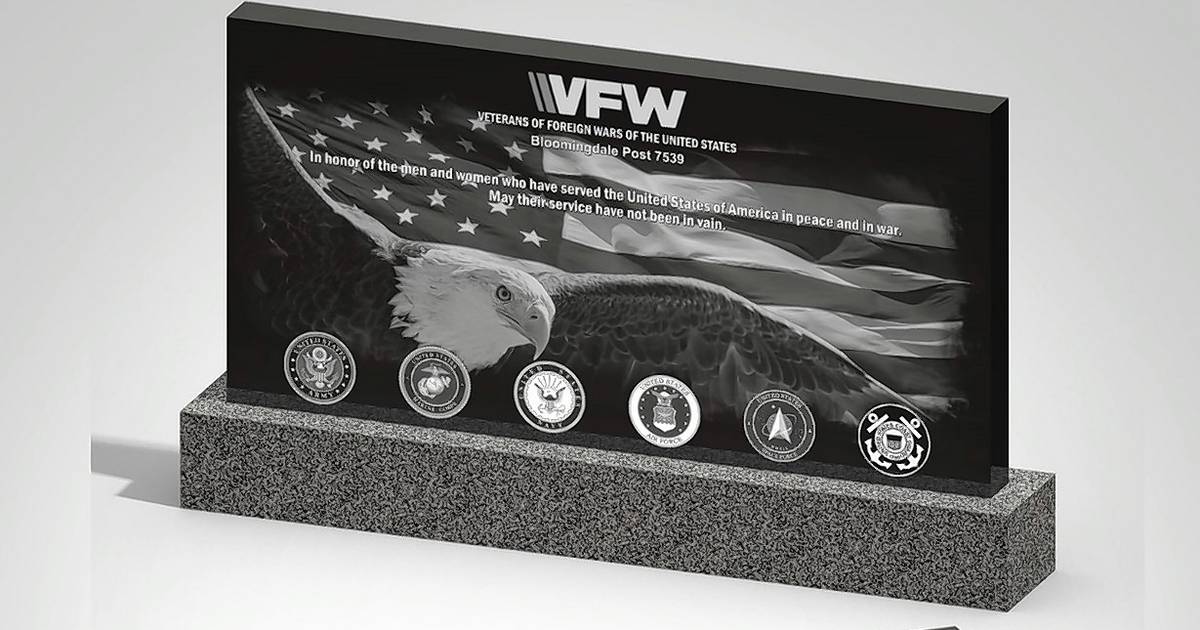 The Foreign Wars Veterans Post serving Roselle, Bloomingdale and Medinah will unveil a monument in Bloomingdale to honor the deceased veterans during a Veterans Day service on November 11.

The marble monument is 8 feet wide and 4 feet high, weighing approximately 5,000 pounds. It will be located near a lookout on Fairfield Way and Bloomingdale Road, next to the Library and Festival Hall. The monument will have a bald eagle on the front, emblems of the six branches of the armed forces and a message honoring the sacrifice of the men and women who died serving in the military.

On the reverse side there will be a photo of a cemetery and a quote from General George S. Patton saying, “It is stupid and wrong to mourn men who have died. Rather, we should thank God that such men lived.

The VFW is raising funds for the monument. The lighting and the floral arrangement around the monument will be provided by the village.

“This is a project they have been working on for a long time,” said village president Franco Coladipietro. “It is a great honor to give to our veterans.

Ed Aubin, a Vietnam veteran and member of the Bloomingdale VFW Post 7539, said the monument has cost around $ 30,000 so far. He said the village was very interested in the project.

“Our post thought it was time to see something more visible to recognize all the vets who have sacrificed themselves for our country,” Aubin said. “We are so excited and happy that so many people are getting involved.”

The veterans advocacy group will have people looking for door-to-door donations and other businesses for the monument on Saturday and Sunday. Those wishing to donate can go to vfw7539.org/meeting-highlights/veterans-memorial-donation or email Randy Winter at [email protected]