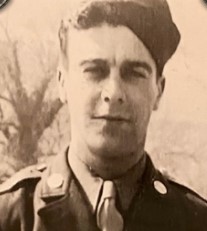 Henry was born in New Bedford, MA, the son of the late Narcisse and Georgianna (Noel) St. Pierre. He grew up in Central Falls and has resided in Pawtucket for the past 35 years. He was predeceased by a son, Henry E., and his ex-wife Amelia (Fournier). Also predeceased by brothers Armand, Leo and George; sisters Rhea (Doda), Annette (Tooma) and Dora (Morissette). He is survived by one son, Michael (Robin), two granddaughters, two nephews and five nieces.

Henry enlisted in the army on October 29, 1940 and was honorably discharged on September 16, 1945. He was a member of the 1st Infantry Division, Battery B, 33rd Field Artillery. When the United States entered World War II, he participated in the amphibious landing at Oran, Algeria, and actively fought in the North African campaign. He then took part in the invasion of Sicily. After Sicily, he returned to England to prepare for the invasion of Normandy at Omaha Beach. After landing at Omaha Beach, Henry actively engaged in battles in northern France, Belgium, and the Rhineland. Towards the end of November 1944, he volunteered to go behind enemy lines in the vicinity of Mérode, Germany. While behind enemy lines, he radioed into critical enemy positions at great personal risk. He was captured by the Germans on November 29, 1944, and spent the rest of the war as a prisoner of war until his release on May 9, 1945. For gallantry in action, Mr. St. Pierre was awarded the star of ‘silver. He was also awarded the American Defense Service Medal, the American Campaign Medal, the Europe-Africa-Middle East Campaign Medal with two bronze stars and one silver star, the Victory Medal of the World War II and the POW Medal.

A committal and burial service, with military honors, will be held in the spring at the Rhode Island Veterans Cemetery in Exeter, RI.